LT Daily, media brief
aA
The Lithuanian Peasant and Greens Union frontrunner Saulius Skvernelis has been just proposed by the President Dalia Grybauskaitė to become the head of the new cabinet. On Wednesday last week, his party signed a coalition agreement with the Social Democrats, upon which the new state government will be based. Skvernelis spoke on reform, party influence and posts, experience in the police and what of it can be employed in government in an interview with Vakarinė Palanga. 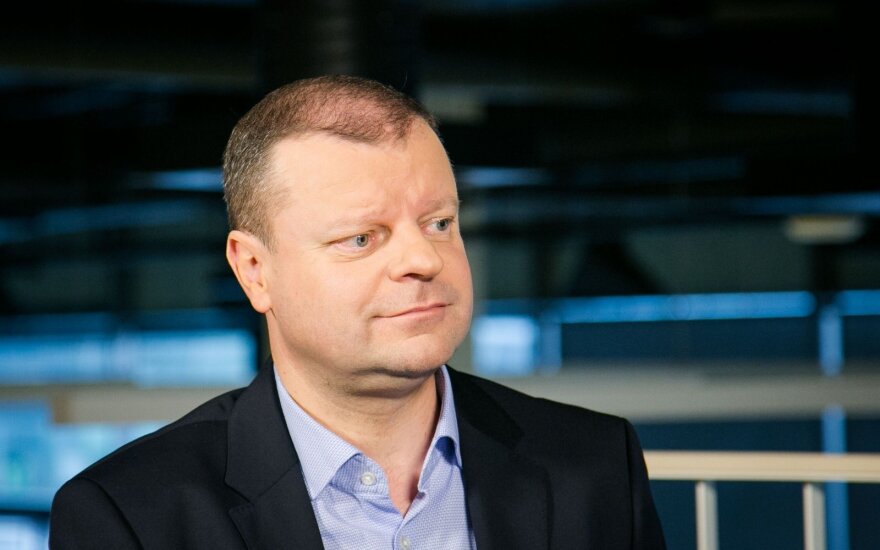 “If I said that [the post of Prime Minister] is not intimidating, I would most likely be lying,” said Skvernelis. Nevertheless, he feels that unlike prior to his term as police Chief Commissioner or Minister of Interior, he is taking it in his stride and is prepared to overcome resistance from “those who thought that they decide everything in the state and can do everything “under the table.”
When asked whether the transfer of experience and skills from police work may lead to a sort of police state, Skvernelis responded that under his leadership the police force was open-minded and democratic, albeit with leadership structures intact.
|
Once again Skvernelis alluded political elites, noting that he seeks order in the state and wants decisive reformative decisions, though backed by a competent team. He views the PM’s role as unifying the cabinet for a common purpose.

The “Peasant” frontrunner reassured that there is no need to worry about any sort of revolution or wave of tax and financial inspections, pointing out that he himself views such demonstrative acts with scepticism. He did, however, stress that there is an issue in dealing with large enterprises and their taxation and that the responsible institutions need consolidation to work more effectively.
The politician admitted that there is potential for confrontation with large businesses due to the more rigorous approach to their taxation, something that Skvernelis notes will require intellectual capacities on part of the officials responsible to prevent tax evasion. He does point out that such matters can at times simply be resolved by uncovering tax evasion and ensuring the company in question is made well aware the state has caught on. Skvernelis pointed to the example of Estonia as a sample of good practice. And that by ensuring that tax evasion and corruption is reined in, it will be possible to improve conditions for businesses to compete.

He also expressed support for a trimmed down, more efficient and responsive state service with less bureaucratic tape, somewhat more akin to businesses, including the larger wages seen in the public sector. The politician also noted that there is need to extend the capacities of municipalities, delegating more functions to them and incentivising development in them. Skvernelis observed that it is important that the municipalities would be engaged with the processes of attracting business and raising the number of jobs, particularly because they are the most aware of their potential. Overall he observed that the current mode of governance is inefficient due to the disparity between central government and municipal government, especially with some municipalities being, as he believes, highly politicised and forcing people living in them to vote for specific parties because conditions do not allow otherwise. Thus, according to Skvernelis, it is important that with a change of central government, there would be less need to worry about changes in school director or even teachers along partisan lines.

When asked if this sort of expectation is possible to achieve, Skvernelis was confident, noting that he believes that it was not the elite that voted for his party, but “the simple Lithuania, which is perhaps not heard by everyone, with no-one wanting to see it, ridiculing it.” He noted that his party will gather a team which is to truly represent the majority of Lithuania, which is “ridiculed by that so-called elite.”

Returning to the topic of bureaucracy, Skvernelis pointed out that the reduction in the size of the bureaucracy is inevitable, highlighting the issue of a practice where some state officials simply sit in their offices, without actually accomplishing any work, being given posts based on political allegiances rather than education and competence. When asked how such a decades old practice can be overcome, the Peasant Greens frontrunner pointed to the State Service Law, which the new Seimas is to review in connection the new Labour Code.

The expected merging of ministries was also discussed. Skvernelis noted his party supports horizontal governance, which would include merging departments in various ministries which perform identical tasks and removing non-essential functions and ministries. He noted the overlaps in interactions with businesses in the ministries of energy, economy and even foreign affairs and other overlaps with the Ministry of Transport and Communications. The politician stressed that this drains a massive amount of funds, particularly with the state failing to consolidate its IT infrastructures.

Skvernelis was quick to point out that his party is not one of the countryside, something highlighted by the strong showing in single-mandate electoral districts. Nevertheless, he expressed belief that in the end, the countryside is the backbone of the Lithuanian nation, a sort of fall-back. He also disdainfully commented on those declaring on Facebook, that there is a need to defend the state and strengthen its defences, stating that “<…> if that day “x” arrived, I have no doubt that they would appear somewhere in the West and from there would love their motherland or would gladly pledge to the new occupant government.”

Talking of what came as surprising during the electoral campaign, Skvernelis said he was most surprised by the shifts between party stances after the first and second rounds, noting that he was surprised at the complete changes that accompanied them, admitting that this is specifically the case in regard to the Conservatives.

Skvernelis commented very positively on the leader of his party, Ramūnas Karbauskis. Skvernelis admitted that half a year may not be the most time to get to know someone, but he noted that the best test of character will be governing. The politician was less willing to comment on other key leaders, namely Algirdas Butkevičius of the Social Democrats and Gabrielius Landsbergis of the Homeland Union, but expressed hope that he will be able to find common ground and constructive dialogue with both.

As far as inspiration and ideals go, the politician found it hard to be specific. He noted Margaret Thatcher and Antanas Smetona as key historical figures. He also praised the Conservative patriarch Vytautas Landsbergis for his role in the independence movement, as well as the sometimes controversially viewed Algirdas Brazauskas. Beyond that he also expressed great respect for former President Valdas Adamkus, noting that the venerable politician is a moral authority for the whole country.