Interview with heads of armed forces on universal conscription and more 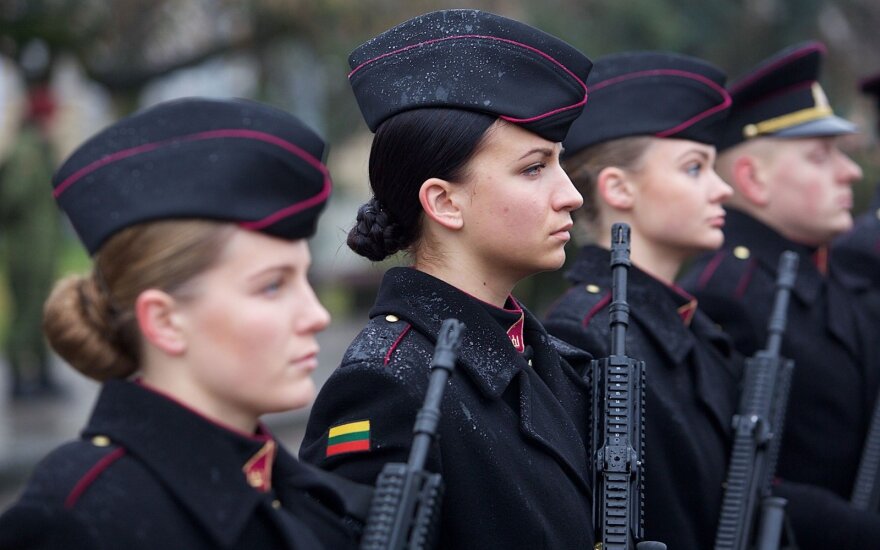 Prime Minister Saulius Skvernelis has declared that universal compulsory military service could already be established during the Seimas term, that is to say within the coming 3.5 years. How would this work? Is universal compulsory military service necessary? LRT spoke with Minister of National Defence Raimundas Karoblis and head of the Lithuanian army Jonas Vytautas Žukas.

- Mr. Karoblis, while discussions are still preliminary and there are no final decisions yet, but nevertheless, how would this work?

R. Karoblis: The government programme has a proposal that we will discuss the possibility to transition to universal conscription. This has already been discussed with the Prime Minister once, we discussed how this could be accomplished. We have a duty to prepare models and alternatives as to how universal conscription and compulsory service could appear. We also have to decide what numbers we are talking about and when this should happen. The real situation is that we need to discuss a stable development of the military, our main defence system. The basis of this is a professional military. We have to consider about its development, both in terms of quality and quantity. Conscripts are also very important. It is learning to defend the homeland – a sacred constitutional duty. Preparing the reserve and volunteer forces is also very important. All spheres are important, we must ensure they are supplied. If we are to talk about universal compulsory service, we have to first consider infrastructure.

- In other words if universal conscription was declared today, there would be nowhere to call all 18-19 year old males?

R. Karoblis: Indeed. If we called all of them, we would have around 7,000 conscripts. Last year we called 3,000, this year the number is 3,500. This is the limit and a significant challenge to the military because today we will have more allied forces present. There are limitations in terms of barracks, in terms of capacity to train, in terms of training locations and in terms of officers and NCOs who could train the conscripts.

- Mr. Žukas, considering demographic forecasts in 2020, 21 thousand youths will finish their schooling, with half being male. Will the military be prepared to call around 10 thousand conscripts after 3.5 years?

J. V. Žukas: We are not even considering such a number. First we have to decide about age groups. Based on current regulations, individuals aged 19-35 can join the military, while conscripts are aged 19 to 25. Current legislation prohibits conscripting students as well as those working in power structures. There are significant health restrictions. If nothing changes, of those 10 thousand, the number will remain the same – 3.5 thousand.

- Mr. Karoblis, speaking of universal conscription, what restrictions other than health and belief should be removed? Should students not defend their homeland?

R. Karoblis: I believe that after finishing school, another schooling must be concluded where you learn to defend the homeland. We are talking about preparing a warrior. It is not servitude, it is not filling the gaps when we fail to gather a professional army. During the whole process, that is during 9-11 months, the youth would train and then be in the reserve. It is a normal learning process, how to perform the sacred constitutional duty. Whether we like it or not, we have to consider delays. If a person is studying, perhaps they could participate in junior leadership courses, train as reserve officers or can instead serve as conscripts. We are discussing several potential models which need preparing and presenting to politicians.

- Mr. Žukas, if universal conscription is implemented, will it not be discredited by exemptions?

J. V. Žukas: I believe we need to seek political agreement. If we are talking about universal conscription, we have to look to the future and consider how we can achieve this. We have to change legislation, we need agreement on financing among the parties, we need priorities outlined. We currently have financing, large projects, we are aiming at 2% GDP for national defence. If we are to begin talking about universal conscription from tomorrow, we need to review the priorities.

- Invest more into infrastructure – barracks, detachments, canteens and such?

J. V. Žukas: Yes. We have to consider timing and what our priorities are. Whether we are to develop projects we have already begun or whether we are to direct attention to infrastructure, to preparing sergeants and junior leaders.

- I understand you are inclined to limit the number of conscripts, not go ahead with universal conscription and firstly equip the current military with necessary equipment.

J. V. Žukas: I do not believe that universal conscription is not necessary, it can be discussed. In the future it could be the best option in preparing a reserve for national defence, but we have to consider how this pans out in terms of time – when can we prepare the personnel and infrastructure. We also have to review what is being done today. Currently we are undertaking many expensive projects, we will have to supply around 2,000 foreign troops and provide them with opportunities to train with Lithuanian military detachments. It is a great strain. Discussions of universal conscription will continue, we have yet to decide on the timing. We will perform analysis and then will provide our conclusions.

- In terms of defensive power would 10 thousand conscripts be beneficial?

J. V. Žukas: Of course. The more reserves the country has, the better. Finland has several hundred thousand reservists. Any country which has a conscription system is oriented not toward undertaking international missions or specific tasks, but toward defending its territory. It is a school, it is preparing a reserve. If something were to occur, whether it be hybrid or conventional warfare, unprepared troops would not be used in military action. Only those who have undergone the whole training cycle and entered the reserve would be put to use.

- Even with the increased national defence financing next year, the government would be unable to prepare for talks of universal conscription in 2019-2020?

R. Karoblis: The goal for next year, approved at the State Defence Council and Seimas, is 4,000 conscripts. If we made it in time to declare universal conscription in 2020, it would be around 5.5 – 6.5 thousand individuals. Perhaps we could increase the number of conscripts by a thousand every year however we have to answer the question of at what cost? We must not disrupt the consistent development of the military, the professionals should not be worse supplied than the conscripts, our armament projects should not be endangered. I believe that the question of whether conscription should be universal or akin to now should not be an end in itself.

- Am I correct to understand that when you talk of universal conscription, you have people of the same age group in mind? Finish school and all go serve? Is that the idea?

J. V. Žukas: Various models are possible. We can discuss conscripting 19-21 year old youths, we can speak of those just finishing school, we are discussing the options. If the infrastructure permits and we have enough personnel, we could conscript even 15 thousand. So far we have yet to decide. The news that every youth who finishes school should serve in the military is broadcast. These are all good proposals, we agree with them. I see meaning in it since we live in a dangerous environment. We have to prepare for national defence and form a reserve. There is much speculation on the current conscription model, the lotteries. In order to avoid it we need to discuss all options.

Setting date for universal conscription too early - chief of defence

Speaking about the date of introducing universal conscription in Lithuania is still too early, says...

Minister of Defence hopes all recruits to join voluntarily in 2017

Lithuania's Defence Minister Raimundas Karoblis hopes that all recruits will join the country's...