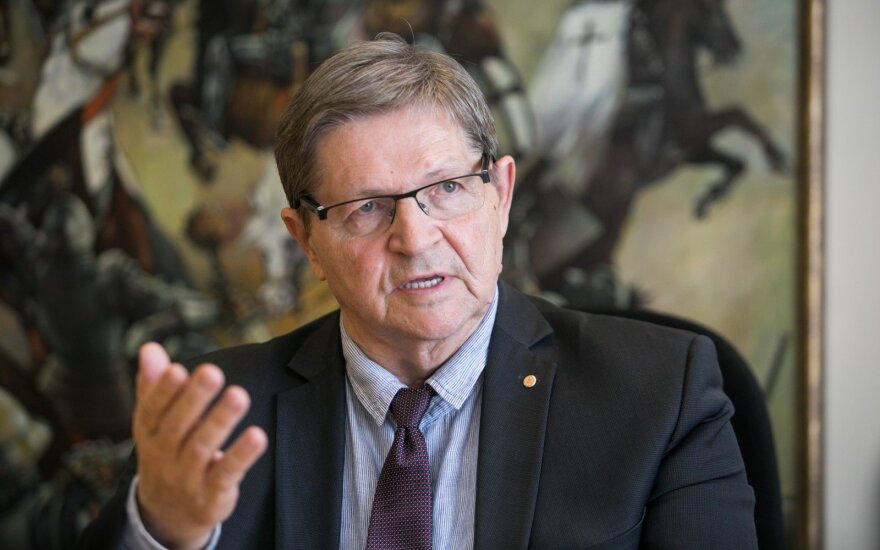 The "Farmer" decision to remove specific universities' names from higher education reform which received enthusiastic support from rectors, has another side to it. There are parallel plans how to achieve the same thing as before, just instead through a system oriented quality metrics.

"We did not give up on our primary option, but we changed the wording," Seimas Committee of Education and Science chairman Eugenijus Jovaiša told Delfi.

An influential Farmer Greens representative in Seimas explained that the primary variant presented by the cabinet workgroup with clear outlines of what universities should merge was not greenlit by the Justice Department due to the parliament being unable to ratify such a document.

Related articles
Seimas okays plan to cut university numbers by half
Higher education reform at the finishing stretch – what will follow?

"Just the fact of the contract brings us to the negotiating table, it will be unavoidably necessary to negotiate and understand that it is time for us to start living as does Europe – based on contracts," stated E. Jovaiša.

In his opinion the "student basket" system which has operated since 2009 has not proved adequate.

"This is because we left the right to choose the development path of the state to the youth. It is excellent if the youth is well oriented, but often enough it is a case of self-searching. When applying to higher education institutions there used to be up to 15 choices, then it was reduced to 12, now – 9 and there are many such cases when youths leave university after studying for a year," Jovaiša stated, rebuking criticisms of Soviet planning by stressing that all European universities work based on contracts with the state.

While the politician assured there are no plans to remove paid studies, there are to be changes in this regard as well. He points out that universities will not be able to have low quality programmes that allow passing just by paying up. "We will make it that paid university studies would also be of good quality and that quality people would attend them," Jovaiša said.

Financing to be tied to quality requirements

According to him higher education financing will be distributed based on pre-set study quality requirements.

According to the politician, other than just study quality, it is important to reform the bloated property and administration of universities. E. Jovaiša is certain that "only wise higher education institutions" will take steps toward consolidation.

LEU must decide itself

Until asked, the parliamentarian did not mention the Lithuanian Educology University (LEU), where he used to work prior to entering Seimas, at all and in response claimed he is not seeking to shield the university.

"What a silly thing, life starting in Seimas just today. This merger process began in 2015 when I was still working there. But keep in mind – I did everything for this university to change, I strove to merge this university with a strong one. Just as is in our programme that I wrote myself, teachers should be prepared in the strongest universities.

He notes that the LEU must decide on its own, what path to take.

"There was a delegation, we hosted them with Ramūnas Karbauskis and told them very clearly – you deal with yourselves, do not visit Seimas, it is an internal matter of yours, you have your rectors, your Senate. They come asking silly things – let us, honour Ramūnas, merge one department with VU and another – with VDU. So we told them that they, as rectors, should sit down together and come to agreement," E. Jovaiša recalled.

Assures of cooperation with S. Skvernelis

Prime Minister Saulius Skvernelis has considered appealing to the Seimas Commission of Ethics and Procedures regarding potential patronage by E. Jovaiša toward his previous workplace. E. Jovaiša himself assures that he now has good working relations with the PM and the Minister of Education and Science Jurgita Petrauskienė.

"Yesterday and the day before opponents spoke that I obstruct S. Skvernelis. Dear lord, we with the Prime Minister, minister and R. Karbauskis all presented this proposal together. S. Skvernelis' signature is first and I'm accused of obstruction, that I oppose the PM. Good people, his signature is first," E. Jovaiša stated.

In the politician's opinion the new proposal is not a departure from primary planning.

"For the first time in many years have we made such a shift that it cannot be stopped any longer. You cannot shelve what we have done anymore, as was the case in many governments before," he stressed, also adding that one of the main reasons for the universities' earlier opposition was the imperative language of the previous plan.

Members of Seimas approved the state university optimisation plan on Thursday. This plan is viewed as a compromise because after disputes in Seimas and academic communities, the plan no longer has specific directions how universities should merge.

The Minister of Education and Science Jurgita Petrauskienė has described the variant selected by Seimas as a poorer option, but a compromise.

Seimas okays plan to cut university numbers by half

The Lithuanian parliament on Thursday endorsed a state university network optimization plan that...