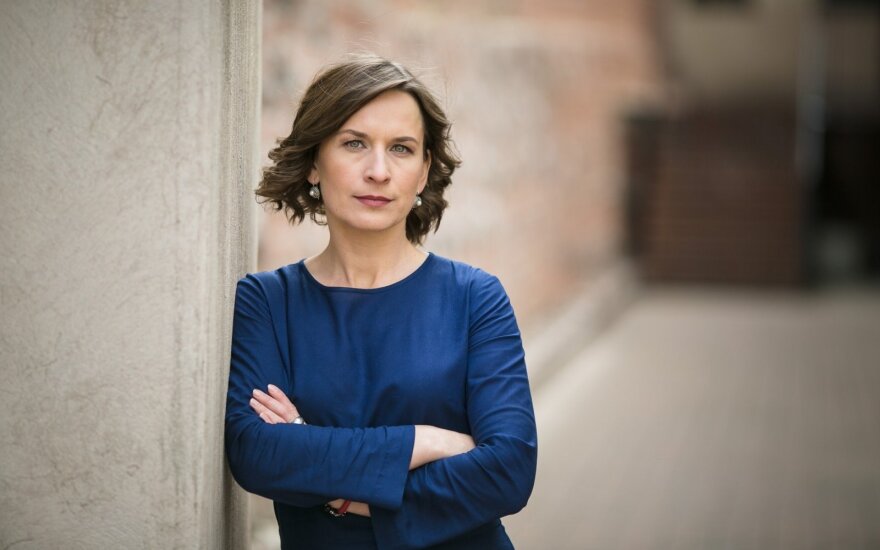 Prime Minister Saulius Skvernelis is laughing again. He is laughing at the doctors who got on the plane with empty suitcases because they, those fools, fail to realise that politicians are aiming at them. The prime minister laughs even more by musings that his idea to suddenly renew relations with Russia is the start of his presidential campaign.

And so S. Skvernelis continues his joke streak. But the prime minister, as is known, jokes when he is stressed and when the reins are slipping out of his hands.

And really, S. Skvernelis was met with a very serious problem. On Thursday, despite great efforts – pressure, convincing, round tables and promises – for the protest not to go ahead, resident doctors went to the airport and got on a plane.

Meanwhile everyone else who supports them gathered at the Cathedral and the cabinet building. The group of healthcare staff is akin to a knife stabbing into S. Skvernelis' most tender place – the government promised to halt emigration, but it not only failed to rein it in. Some of the participants of the protest already arrived with airplane tickets.

The major problem for S. Skvernelis is that the doctors are not asking for only wages. Yes, dignified wages, ones that law enforcement officers will receive starting this year without protests and pickets, are one of the protesters' demands. But from the very first days of the Doctors' Movement, there was talk of reforms.

Not a vision, slogans, plans, but healthcare sector reform. Because upon it depends where and how currently studying doctors will work and what services the patients themselves will get.

But S. Skvernelis, you have to admit, is no simple private Aurelijus Veryga. The prime minister displayed decent political clout when he joined Ramūnas Karbauskis and rode right onto power on the Naisiai horse, rather than the slightly rotten Social Democrats or the Liberals.

His instincts are loudly signalling that the healthcare staff is bringing him down on the way to Daukantas Square.

S. Skvernelis got mad immediately when the Doctors' Movement was created.

This community is something different to the statutory officers under his patronage who obey the leader's commands. No-one can order a doctor. Doctors simply need to buy an airplane ticket. Doctors are educated, they realise how legislation is passed and thus such discontent was caused by a piece of legislation which was voted on repeatedly, which should have raised the residents' wages.

Doctors know how to count.

And it is not doctors, but patients who are S. Skvernelis and this government's voters. And just about any reform raises confusion, patients dislike changes, furthermore the reforms would involve a reduction of the regional hospital network, thus also the anger of the chieftains, patients of regional hospitals, municipalities and many other unseen things – S. Skvernelis' voters.

If there was at least a blueprint for reform. But it doesn't exist. And experts also say that there is need for real tax reform.

Looking from this perspective, S. Skvernelis' anger when he condemns the protests, starts linking them to the opposition, with hostile forces that supposedly the doctors are politicised and all sorts of other enemies is completely understandable. Just that you can't go far on condemnation... After all, doctors aren't uneducated part-timers.

And so to side-line the problem with doctors and all others, a new topic is brought out. A relatively new, but immortal, appealing and acceptable in certain Lithuanian circles idea.

And it is namely relations with Russia. It is always suitable and no-one has lost before with the slogan that you can't pick your neighbour and thus we need a more rational, pragmatic view of Russia and discourse, which turned into "communication channels" in S. Skvernelis' words.

Not even Dalia Grybauskaitė.

And it is just those in Seimas. You have Ramūnas Karbauskis, still the most influential member of Seimas, as well as Kaunas Mayor Visvaldas Matijošaitis, who is accumulating an electorate for the presidential elections and will likely hand it to the highest bidder an. Both were supporters of this position. Business with Russia and sensitivity to political winds in Russia, but profits are so high that you can even dedicate some to finance political activities.

Thus on the second day of the New Year S. Skvernelis declared that Lithuania is a unique country which is the only of the EU member states with no communication channels with Russia and this, according to the PM, is not good.

Initially context was lacking, but it appeared very soon. The prime minister lacks foreign policy experience, thus repeated essentially the same thing the next day. His advisor for foreign policy questions Deividas Matulionis endeavoured to save him, but it was difficult for this seasoned diplomat to explain how to recreate those communication channels with Russia when the ball is in the Russian side of the court.

And on the third day, finally having gathered his arguments and studied up, S. Skvernelis explained himself that it is necessary to renew the work of the Lithuanian-Russian intergovernmental commission. Because when there are no relations with Russia, the interests of the Lithuanian people suffer: you see, Lithuanian exports are viewed not as economic relations, but through a political prism.

However at the same time S. Skvernelis repeats that the political position toward the Russian regime is unchanged.

Russia is truly a difficult question. And certainly what relations should be maintained, how they should look, how much and with who to interact in Russia, these are a topic for very serious discussion which is lacking.

Yes, S. Skvernelis is right when he says that there can be no unilateral decisions in foreign policy questions and seemingly with justification struck out at the president for the fickle and uncoordinated with the cabinet decision on how to vote in the United Nations General Assembly regarding Jerusalem.

However anyone at least a little familiar with relations with Russia will find S. Skvernelis' arguments why and how communications with Russia should be renewed superficial, if not naïve. If Lithuania is adhering to the same position over sanctions, Crimea, Ukraine, human rights, hosts Russian opposition forums, when Michail Chodorkovski visited several times at the official invitation of Lithuania and his helper Vladimir Kara Murza visits every half a year despite several poisoning attempts, what sort of Kremlin perspective on Lithuanian exports is S. Skvernelis talking about?

Finally S. Skvernelis begins to contradict himself because he retorted quite brusquely to his Foreign Minister Linas Linkevičius, who thinks otherwise, that L. Linkevičius perhaps doesn't always feel as if a member of the cabinet.

After all L. Linkevičius could not have known that the cabinet is not all of them, but the prime minister. But he will now. Because now two people in the state make unilateral decisions. The president and the future candidate.

Such are the prime minister's jokes.

And soon it will be January 13. Intentionally or not, but prior to this date, according to veteran politician Gediminas Kirkilas, whatever you may think of it, the Russian embassy becomes more active. The ambassador requests meetings and unexpectedly received one last year. He left with pomp. The newly baked Seimas Speaker Viktoras Pranckietis did not have many minutes, but the Russian ambassador said much, both what he wanted, how he views the world and even taught what we should do.

Russia was granted an excellent communication channel. Whatever Lithuania obtained in return, our officials did not boast.

It is January once more. January 13 is nearing.

The mass protest action held in Vilnius on Thursday over salaries of health professionals and other...

Lithuania's Foreign Minister Linas Linkevičius possibly thinks he is not a member of the...