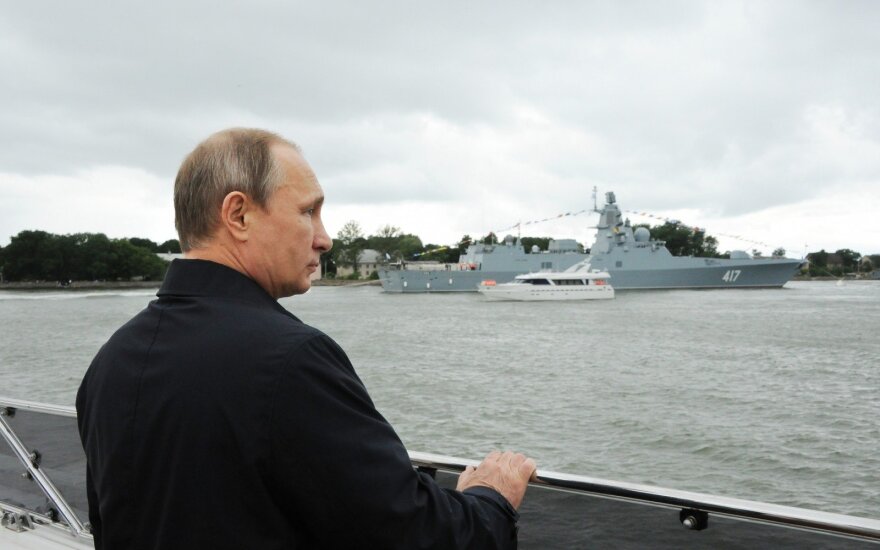 Vladimir Putin during his visit to Kaliningrad
© RIA/Scanpix

The average inhabitant of Kaliningrad is three times richer than an average Lithuanian. Living standards in the militarised Russian exclave are higher than in Lithuania. Such statements adorn pamphlets distributed into Vilnius post-boxes, with the Russian embassy trying to lure Lithuanian Russians, trying to revive an unsuccessful programme of returning fellow Russians to their historical homeland.

Last week the inhabitants of Vilnius were surprised to find official-looking pamphlets with a bright Russian inscription “Russia” and the country’s flags.

What is most peculiar is that in these paper pamphlets, web addresses are presented, as well as contact information for the Russian embassy and some intriguing tables. In them we can find some price comparisons between Lithuania and Kaliningrad Oblast.

For example it states that a kilowatt-hour of electricity costs 0.12 euro in Lithuania, while it is 0.04 euro in Russia. Prices of petrol are compared – in Lithuania, it states, they are around a euro, while in Russia – 0.5 euro. Furthermore in Kaliningrad utility payments are lower, costing 70 euro during the coldest month, compared to 280 in Lithuania.

It states that the prices of key household goods are twice the price in Lithuania, while despite earning more than in Russia on average, 500 euro versus 430 euro, purchasing power is lower in Lithuania.

It is finally concluded that in Russia, a family of 4 individuals living in a 3 bedroom flat retain 310 euro for living costs, while in Lithuania – just 120 euro. Wealth is calculated based on this – those in Kaliningrad are more well off because their living standard is three times higher.

Furthermore, in the next page the data compared is no longer that of Lithuania and Kaliningrad, but the data of both countries, albeit from different years for some reason. Readers are once more showered with useful links – channels identified as Russian propaganda tools, such as Sputnik, RT and others.

Meanwhile the Russian calculations provide amusement for economists. For example Chief Economist for Swedbank in Lithuania Nerijus Mačiulis called the data in the tables selective statistics and it is particularly inaccurate in some places.

“This is called “lying through statistics”. The price comparison is very selective – electricity and petrol are cheaper in Russia because the state subsidises it (does not tax it).

They could have added that cigarettes and alcohol are far cheaper. But is this where happiness comes from? Due to the devaluated rouble many Russians are no longer able to afford any imported goods and have to make do with the far more sparse and lower quality assortment of local goods,” stated N. Mačiulis.

He stressed that the table also selectively distorts wage statistics because in Lithuania the average actual wage is not 500 euro, but 600.

Meanwhile the Chief Economist for bank Nordea Žygimantas Mauricas noted that while Lithuania is generally compared to Kaliningrad Oblast, the data in the table is from the average of Russia as a whole.

And it is inaccurate because in Russia the average wage indicated is not the actual wage, furthermore the number stated next to the euro figure (30 thousand roubles) only reaches 26 thousand in reality, while in Kaliningrad, it is even lower. Meanwhile N. Mačiulis noted that minimum wages were omitted. While it is not impressive in Lithuania, reaching 380 euro, it only reaches 100 euro in Russia.

“It is not a detailed analysis, only the metrics where Russia is leading were chosen, but these are not objective comparisons. They are manipulating data, not indicating the year or the source. It is like comparing apples and oranges.

Meanwhile statements that living standards in Kaliningrad are three times greater is completely incorrect. Lithuanians could compare certain metrics and exceed even the Scandinavians in them, for example expenses in small towns.

But after all we do not compare them that way and even the Russians do not do such comparisons with, for example, Finland,” said Ž. Mauricas. He does add that nevertheless, Lithuania needs to shape up and deal with current social and economic challenges, even when faced with such absurd Russian analysis.

Furthermore, according to N. Mačiulis, while the Kremlin has definitely managed to attract immigrants from poorer neighbouring Commonwealth of Independent States (CIS) states, Russia itself is suffering from brain drain – the best and brightest are seeking opportunities abroad.

The Russian embassy confirmed responsibility for distributing such pamphlets. They are apparently a part of an initiative in Lithuania supported by Russian President Vladimir Putin himself since 2006 which seeks to return fellow Russians to their historic homeland.

Russia boasts a total of 106 thousand individuals having repatriated just in 2014 in response to their countrymen’s call. From the initiation of the programme, apparently 255 thousand people have moved. Just the Kaliningrad Oblast received over 36 thousand repatriates, with six thousand arriving this year.

The Russian embassy employee assured that the programme is proceeding smoothly and such calls for Lithuanian Russians to return to their historic homeland receive much attention. With that said, statistics are not favourable for the Russian embassy in Lithuania because it was clear already four years ago that the aforementioned repatriation programme was met with fiasco.

Already in 2014, the Russian Nationals Association working in Lithuania released a call for Russians to return to their historic homeland, but did not receive a single response for several months. Prior to that only a few families made applications throughout the prior few years.

At the same time, just in the same year, tens of individuals from Russia requested political asylum in Lithuania, with eight Russians receiving a positive response.

The problem lies in the fact that the Russians were offered to move not to economically well off regions, but to the Eastern Siberian steppes. The Russian nationals from Lithuania were most attracted by the closer by Kaliningrad Oblast, interest was expressed in the Kaluga, Tver and Lipeck oblasts. Some were interested in moving to Irkutsk, Novosibirsk, Tiumen, Omsk, Kursk and Voronezh, as well as Krasnojarsk, Primor, Chabarovsk and even Kamchatka.

That said, experts believe that the failed programme was revived in Lithuania for a reason because it is not returning fellow countrymen who would take up residence far from the big cities in the Far East, Siberia or in the Volga region, but rather the perceived caring for their countrymen and the opportunity to protect them from discrimination as was done in Crimea and continues to be done in Eastern Ukraine.

Lecturer at the Institute of International Relations and Political Science (TSPMI) Nerijus Maliukevičius is also convinced that the programme is symbolic. We need only remember the so-called Karaganov Doctrine, which states that Russians living abroad are far more useful than living in Russia.

“It is a sort of chameleon-like policy, it is as if from one side it has those formal paper programmes, but on the other hand at its core you do not need the Russians to return because Putin and the Kremlin needs them to remain in that territory and would perform specific geopolitical tasks. Just look at the situation in Crimea, when it was argued that everything is being done in the name of Russian speakers, defending them and bringing them back into the Russian motherland,” the Vilnius University TSPMI spoke already two years ago.

Meanwhile he describes the new embassy pamphlets as an attempt to revive a once failed programme, this time by using manipulation of statistics.

Kaliningrad is the smallest part of the Russian Federation, spanning over 4-times smaller Lithuanian...

Lithuanian customs authorities on Wednesday said they busted a Russian citizen who had brought a gun,...