I. Makaraitytė. Pit of hot coals for Gitanas Nausėda – the silent majority, which is against gay rights 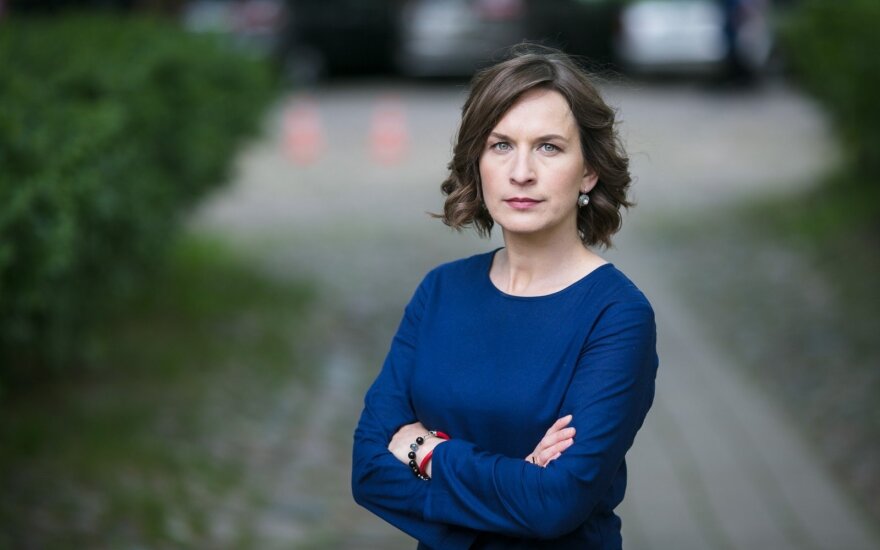 To even his own surprise, Gitanas Nausėda suddenly thought that the question of homosexual partnership should be resolved through a referendum, Indrė Makaraitytė writes on lrt.lt.

It is hard to say, which of his team members could have suggested such an idea to G. Nausėda because the conclusion of such a referendum could cause hard to predict consequences, but Lithuania is certainly not the country, where a politician, who let slip such or a similar thought, would be thrashed by sane people or at least human rights activists until he was forced to at least say that this was not what he meant.

The silent majority that G. Nausėda is oriented toward is also still silent because it wouldn't mind a referendum on every question that causes it inconvenience.

But the silent majority, which really likes that G. Nausėda is not like some radical, who rips his shirt for human rights and abortions, but wisely, silently, without revolution "approaches the question" is a trap for G. Nausėda. The majority remains silent and silently ponders. And it really ponders, who exactly is it that is guilty for Lithuania's problems.

Thus G. Nausėda will be challenged most not by gay rights. The "Farmers" are also acting wisely – not agreeing to homosexual partnership, they cannot fault G. Nausėda at all. Silent Lithuania is also on their side in this regard.

But the "Farmers" have dug a pit of hot coals for him. And it is Stasys Jakeliūnas, who is swinging his shovel the hardest.

G. Nausėda was forced to admit that the Seimas Budget and Finance Committee chairman's letter to the SEB bank's administration changed his plans – he was forced to resign from the bank earlier. This is just the start though.

It has been ten years since one of the largest economic crises to hit Lithuania and S. Jakeliūnas has personally dedicated a significant portion of time to this topic. "It is my professional work because I have published or released four books. All these works were placed into the March 2017 project that was approved in Seimas for the investigation of the crisis' phenomena and causes," the MP explains. This motif was a part of his and the "Farmers'" electoral campaign.

That, which is personal, is also the greatest motivator. Especially when all this time, S. Jakeliūnas could justifiably feel unrecognised. On the most important questions, his position would often be left on the margins, not to talk of how the "Farmers" did not appoint him minister of finance and did not listen in to his arguments over tax reform.

But now the crisis that ravaged Lithuania ten years ago is a topic, which motivates not only him, but the entire Seimas group and S. Jakeliūnas became needed for both Ramūnas Karbauskis and Saulius Skvernelis.

S. Jakeliūnas is one of the major initiators for the causes of the 2008-2009 crisis to be investigated in a special Seimas commission. One commission and the whole electoral period is almost filled with an inexhaustible topic, which is enough to cause problems for at least two candidates.

And S. Jakeliūnas has a special gift prepared for G. Nausėda.

On his Facebook profile, he has written, "G. Nausėda worked in a tiny copy of Leman, but even it greatly ruined our economy. Swedbank at least tried to apologise for the crisis, while SEB with Gitanas decided to take over the country instead."

In other terms, S. Jakeliūnas believes that G. Nausėda is the candidate of foreign banks.

"I believe that it is a massive risk, in the world this process is called a revolving door, when people from large corporations, in this case – banks, enter state service and back. I am not saying that he will directly represent corporate interests, but these matters can be expected," the MP said on LRT's Dienos Tema.

G. Nausėda laughs at this, in his opinion, nonsense. "It should not be imagined that the commission's work will go in a single direction. It will be two-way traffic and I will come with very serious arguments, we will have a serious talk, including with S. Jakeliūnas," he answered.

This question, or rather the "Farmer" and S. Jakeliūnas' commission, could be one of the major arguments for Ingrida Šimonytė, former minister of finance, to decide on entering the electoral race. Though her fate is easier – she became finance minister when the crisis began and she will only have to explain, why she borrowed more expensively.

Of course, "loaned out Lithuania" sounds good, but politicians will find it easier to escape such snares.

It is different for G. Nausėda. "Gitanas and SEB decided to take over the country" sounds even better because G. Nausėda is not a politician. If he is not a politician, then he is the agent of "Scandinavian banks". Bank or banks, which are taking power because: a) they do not want the real causes of the crisis investigated and b) corporations are taking over the world after all, so it's Lithuania's turn now.

Could it be that silent Lithuania will fail to believe that G. Nausėda, alongside the largest bank in Lithuania – SEB, are to blame for the crisis in Lithuania if G. Nausėda will go to the Seimas commission and will "have a serious talk" or will publically spread his wise quotes and will intelligently talk to people? And will talk about the crisis because the waves from Seimas, where the reasons for the all-encompassing crisis will be analysed, will even reach the silent Lithuania.

A rational discussion is unlikely to be possible because the financial and economic literacy of Lithuania is poor. The argument of Aušra Maldeikienė, another presidential candidate, that G. Nausėda was a nobody in the SEB bank and his activities were equal to a hard working public relations person are unsuited for G. Nausėda himself – if you were a nobody, then you cannot really consider the office of president.

The great tragedy of G. Nausėda is that if the person understands that the "Farmer" commission is a conspiracy, intended for none other than to reduce the list of competitors for Saulius Skvernelis(because S. Jakeliūnas, that honourable fighter for tax payers' wages and pensions, guardian from manipulation, totally fails to see a problem with Prime Minister S. Skvernelis having long been using tax payers' money and so-called administrative reserve for his unofficial electoral campaign and that he is being secretive no less than G. Nausėda), then such a person is likely educated enough to understand that human rights problems and minority rights problems are certainly not resolved via referenda.

The supporters of women's rights to their body in Ireland won a referendum in Ireland only this year and it was so unexpected that women struggled to contain their tears, but in Argentina, the result of an equivalent referendum was the complete opposite. But even then, it is unlikely that these examples are adequate for comparison with G. Nausėda's proposal.

Hence, where it's short, it is lacking.

If you want to be elected by people, who think that homosexual marriage should be decided on by the silent, but not necessarily right, majority, these people likely can believe that G. Nausėda is quite akin to an agent of Scandinavian banks, intended to take over Lithuania.

The Lithuanian Farmers and Greens Union (LVŽS) plans to name its presidential candidate late this...

Economist Gitanas Nausėda has on Monday announced his decision to run for Lithuanian president.

Lithuanian President Dalia Grybauskaitė said on Thursday that she will not publicly support any...