I. Makaraitytė. Idea for Lithuania – take the decision makers to Finland 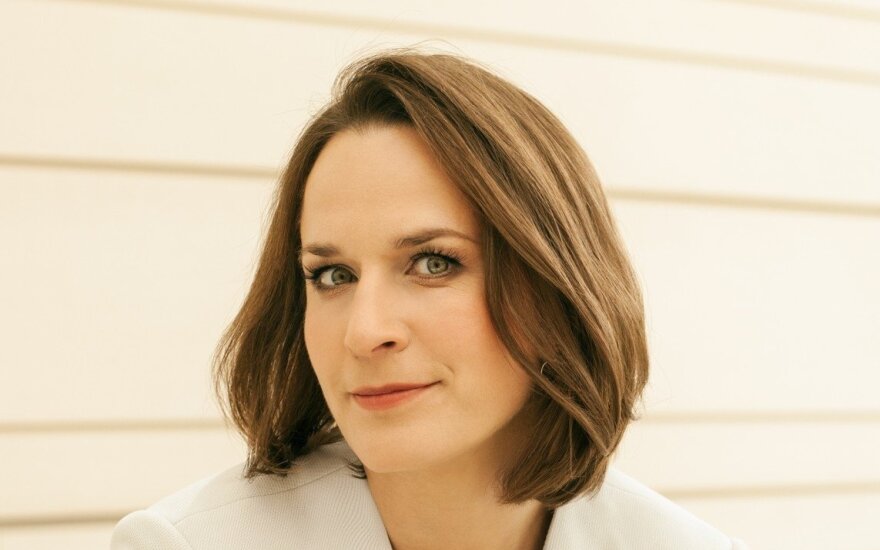 Positive news media, which would be dominated by good news? Well, perhaps not dominated, but at least half positive and half negative. You know, after all negative every day... People read it, end up unhappy and angry. Reading negative things in the morning, shout at their kids. The kids cause a ruckus at school and ignore their teachers after a dose in the morning. But the teachers are already angry because they read Delfi on the bus in the morning and read that the contact hour rate will not change, nor will there be more hours assigned.

If Russia were without Putin, then Lithuania would have fewer convenient idiots who bribe the public, particularly the youth, with shallow song texts. Sea, flea, free, knee, quay. Any word works, as long as there is any semblance of rhyming. And after all you have to be friends with Russia somehow because over all these years you are used to Russia being the neighbour regarding which you've no choice, it's scary to even try thinking otherwise. Because thinking is hard anyway...

And we must definitely rebuild the Great Vilnius Synagogue in the Old Town because Lithuanians cannot do without grandiose symbols such as the Palace of the Grand Dukes. When the Great Synagogue stands, then everyone will finally fade out of memory or completely forget that they, by their own hands and often without even Nazi encouragement, Lithuanians killed their neighbours. After all, what you cannot buy for big money, you can buy for very big money. A grand building will stand, adapted for representational occasions like the Palace of the Grand Dukes. We know how to do it. Few remember now where highbrow parties were held prior to the Ducal Palace's reconstruction.

We have more than just the Ducal Palace. We even have new serfs.

There already are Ukrainians in Lithuania, not just a few hundred. They do not yet compensate the lack of labour force, but still return Lithuanians more self-confidence than even the Palace of the Grand Dukes. After all, finally Lithuanians are not bending their back to a master. Some Brit, Norwegian, Swede or German. The Lithuanian is faced with a Ukrainian, chased out by war or poverty from his lands, head lowered and begging for an honestly earned wage. And three or fourfold smaller than the owner would pay for a Lithuanian employee doing the same work.

And then if the news media wouldn't write that the sires have no shame, life would immediately become better in Lithuania. So what that you steal a bit from some fund. Everyone needs to live. Share. In all times Lithuanians shared with their family. If several families in some region live well, then look, the poor will also get something. Some charity, some Christmas cookies for the children. Truly, if not for the news media, one would want to live here. Work. Be proud of being Lithuanian and living in Lithuania.

But real life is sometimes even more frightening than you can read about. And the Palace of the Grand Dukes is actually empty. Just as empty and raped by history and contemporary cynicism as would be the Great Synagogue. There's hardly any Jews anymore after all.

What a paradox. The reconstruction of the Great Synagogue (how unexpected in Lithuania!) attracted the attention of people who are overall most interested in the expansion of major business projects and little related with heritage, particularly that of a destroyed nation, while the Soviet-era kindergarten built on top of it is still decorated by frescoes with Soviet symbolism. And the parents used the first days of September to clean the school so that at least their children would not feel shame about Lithuania. And what does one do when even the Conservatives and those pushed forward by Gabrielius Landsbergis instead of the "worn out" cadres, distributed the city's saved up money to basketball and not schools?

However the Ducal Palace can still serve Lithuania. And perhaps the new projects built on their basis could also be filled with content. And at the same time we would fill Lithuania with people, before they all go their own way, leaving the country empty.

This is my idea for Lithuania.

If we dedicate all we have, all the free funding, that is now plentiful and is only being considered, to education? As much as is needed. Well, approximately as much as once for the Palace of the Grand Dukes. Currently officials say the reforms require at least 200 million euro. They are providing only 5 million. But if education becomes the second Ducal Palace, you could find even 300 or half a billion. They found it for the Ducal Palace. It is just a question of ideas. And if the idea has its ambassador, as the Ducal Palace had, nothing is impossible.

And why education? Because when education becomes the next Palace of the Grand Dukes, we resolve a number of lingering problems.

When the Lithuanian education system is the strongest in the region, with schools where you can also study in foreign languages, we will not need to beg expats to return.

When schools nurture people who create and not just labour for Ireland and Great Britain, their cabbage and strawberry fields, fish factories, people will want to create. Children create from the day they gain control over their body and their creation only ends when it is forced into our post-Soviet numbing system. It still hasn't gone anywhere, that Soviet school, created especially to create obedient and easily controlled people. Meanwhile the education system reformers are still talking about contact hours for teachers and not reform.

When people create, they will primarily create for Lithuania because this will be their home. They will want that the school where their creative freedom bloomed would be one where their children study.

And free, educated people fear no propaganda, you cannot intimidate them. They will not pay bribes, won't steal from the government. And they won't kill their neighbours. A black soul cannot be fixed by books, but education is the only means which allows an individual to not fear and to not become part of an easily controlled mob. A mob not necessarily for totalitarian projects. We do not even notice how much of our freedom is lost to empty palace projects. When you remain silent once, your opinion is not even asked next time.

And no-one will fear that September 1 starts with Despacito. Because they will know that Tautiška Giesmė [the National Hymn] cannot be replaced by anything in the heart of a conscious and bright heart.

But to take a step toward a good education reform, let me set aside a little from those few hundred million for... a business trip. One long business trip. For a few ministries, the whole cabinet apparatus and Seimas. Yes, they aren't anything great, but being brought and housed in Finland, they would perhaps understand (or at least the dominant part), what a good education system is. And if we let them make use of the pleasures of the sauna in goodwill and the news media leave them be for a while, not counting where the trip funding was spent, look here, they would perhaps bring back not just an idea, but even the whole reform?

True, it may be enough to just take the Ministry of Education and Science on such a business trip because if its people are infected with the idea of a good education system, perhaps they would implement it with the same drive as they protect the current post-Soviet one?

It is worth giving a thought. But education and only education can save this country.

The next year's budget is very important, as it will cover Lithuania's key priorities, namely,...

Lithuania spends a higher proportion of its GDP on education than the EU average, ranking 12th among...