BNS EN
aA
Around three hundred people gathered in the Washington Square in Vilnius on Thursday evening to thank the United States on the 77th anniversary of the Sumner Welles Declaration that condemned the Soviet occupation of the Baltic states. 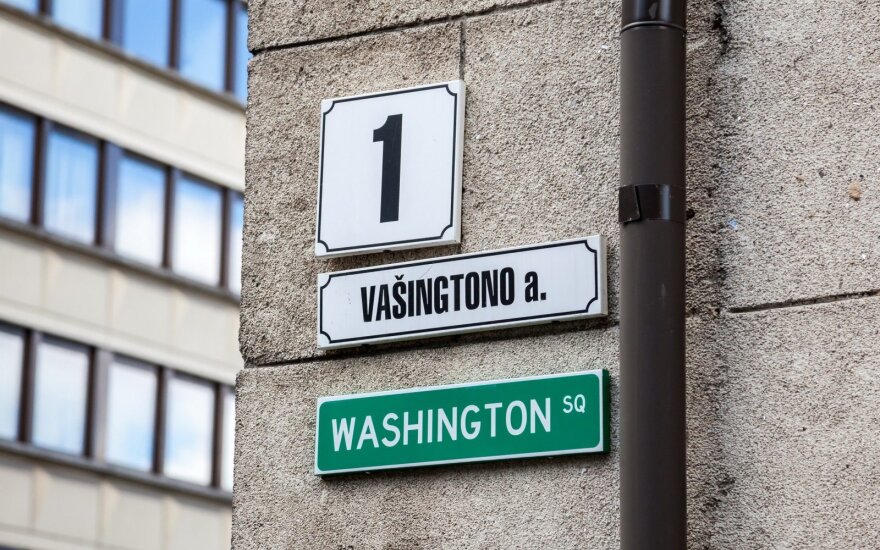 "By saying 'thank you' today not for what happened back then but for what takes place now, we express our firm commitment that we feel a very strong shoulder of our allies. We do not have a slightest doubt in our safety and freedom," Lithuania's Foreign Minister Linas Linkevičius said.

Lithuania's former president Valdas Adamkus who had spend decades in exile in the United States emphasized that "America kept its word by refusing to recognize Lithuania's occupation for 50 years and allowing operations of our diplomatic services."

"Today when we are free and independent, however, alarming voices are heard from the Kremlin, we feel the importance and help from the United States," said Adamkus.

"It is always bright here and it feels good, I cannot remember any thunder, rainfall or taint from the skies or from hearts on this special day. It always feels good to be here," Lithuania's first post-independence leader Vytautas Landsbergis said in his address to the crowd gathered in the Washington Square on Thursday evening.

Traditionally, the flags of the three Baltic countries and the US were hoisted, with the Lithuanian and US national anthems playing in the background.

American food, including burgers and doughnuts, was sold during the event, which included a concert after the official ceremony.

Acting US Secretary of State Sumner Welles on Jul. 23, 1940 issued a diplomatic statement refusing to recognize the annexation of Lithuania, Latvia and Estonia. The document marked the beginning of the US policy of non-recognition of the occupation of the Baltic nations.

Vilnius to host commemoration of US declaration condemning Baltics occupation

A festive event will be held in Washington Square in Vilnius on Thursday to thank the United States...

Lithuania to use famous musicians, Kaunas modernism for presentation abroad

The Lithuanian government's office suggests making a video for audiences abroad for the upcoming...

Lithuania marks on Wednesday the 30th anniversary of the first unsanctioned public rally of the Soviet...