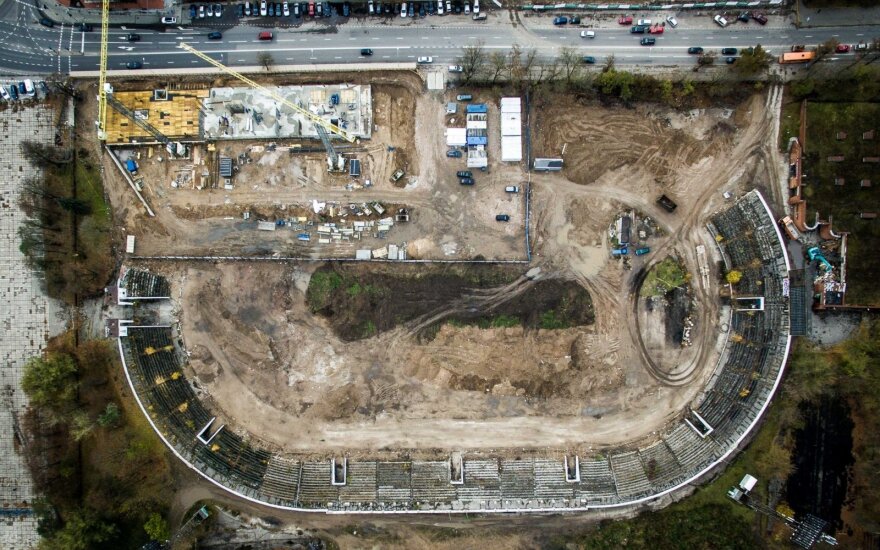 The government often lacks the financial capacities to take care of buildings lightly entered into heritage listings, but refuses to consider the possibility to admit that these are objects of dubious value, thus businesses should be allowed to purchase it and create something in its place. Such were the comments of Minister of Economy Mindaugas Sinkevičius and journalist Andrius Matonis in a discussion with LRT.lt. Meanwhile the Department of Cultural Heritage deputy director Algimantas Degutis explains that heritage does not have to look appealing, meanwhile forcing owners to restore such ruins is exceptionally difficult, LRT.lt reported.

When it was decided to build a hotel and business centre instead of the Žalgiris stadium in Vilnius which had not been operating for five years, various civic sports organisations chose to oppose it. When the reconstruction plans of the old and unappealing Trakai bus station included a shopping centre, Trakai public figures gathered into the movement “Gelbėkim Trakus” [Save Trakai], which invited to fight back against the destruction of heritage in Trakai. Not long ago the retail chain Lidl intended to construct offices in the place of an abandoned traffic police building in Vilnius, but this also struggled against preservationists, who called for discussions of whether the building should be entered into heritage lists.

Journalist A. Matonis calls buildings that have been left to deteriorate for long years and that their protection is brought up only when something beneficial is to be built instead a chain on the state’s legs with a concrete weight attached. He points out that this obstructs progress and repels investors, who would be left uncertain on the future of their purchases.

A. Matonis quotes fellow journalist Ramunė Sotvarė-Šemetienė in describing the situation with Lidl and the Trakai bus station – “While the ruins belong to the state, they are ruins. They have the right to deteriorate on their own with no obstructions. When the same ruins are legitimately handed over to businessmen, they often lose the right to deteriorate.”

The Lietuva cinema theatre, the abandoned traffic police building in Giraitė Street, the Žalgiris stadium which has been left unused for five years and the Trakai bus station are described as ulcers by the journalist. He points out that there is no appeal or benefit to the current Trakai bus station and stresses the community should celebrate the business investment. Similarly with the Žalgiris stadium he points out that it is a location in the middle of town, left as an abandoned field with overgrown tribunes. He stresses that the location would otherwise continue to be neglected and could instead be used beneficially 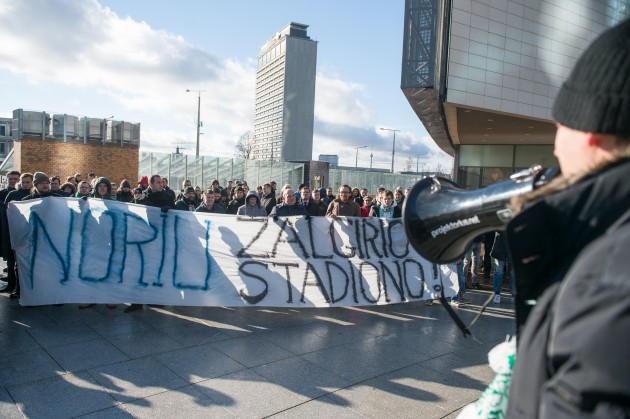 Proposal to review the heritage listing and free business access

Minister of Economy M. Sinkevičius notes that Lithuania has a number of heritage registries and the total list of heritage objects is far too long, to the extent that the state cannot maintain everything. He points out that he personally finds it doubtful whether all the objects included are worthy of being listed as heritage.

Sinkevičius stresses that the state simply does not have the financial capacity to take care of all the buildings included in the heritage lists and that buildings are often included lightly, but the state has refused to consider admitting that the objects are of dubious value and to allow business to construct something beneficial at the location. He highlights the situations with the former traffic police building and the Trakai bus station as incomprehensible, obstructing the creation of added value and economic benefits to the country. The politician quotes the Lithuanian expression “Neither eat by himself, nor let others eat” and points out that the buildings are left conserved, with no funds to restore them.

He explains that the concept of heritage needs to be reviewed and what values have to be reflected, perhaps cutting down on the heritage listings, leaving the objects cut from the lists up to businesses and private initiatives.

Preservationist – we must fill in the listings

According to A. Degutis, deputy director for the Department of Cultural Heritage, usually an uproar regarding such objects arises not when they are to be restored to new life, but when they are to be demolished. He stresses that before purchasing property they intend to demolish, the prospective owner needs to ascertain whether the purchase is not classified as a heritage object.

Neither the Trakai bus station and the Žalgiris stadium is protected as heritage and the ongoing processes are legitimate according to the official, but he stresses that it is impossible to review the heritage object listings and reduce it to an amount the state would be able to oversee. Degutis explains that such a move would not be at all according to international practice. Nevertheless he admits that there are numerous buildings designated as heritage objects during the Soviet era that do not deserve the status and only received it due to political reasons.

Heritage does not have to be appealing

When discussing the criteria for heritage listing, the official explained that beauty is by far not the key criterion. Regarding the case of the traffic police building in Giraitė Street, he points out that one of the criterion is that the object must be famous in some way, rewarded with certain awards and the building fits this criterion – the building has received awards and thus is fit for inclusion in the cultural heritage registry.

Rather than beauty, the official explains that heritage contains information that can be transmitted to future generations about the past. Degutis summarises that “Heritage forms national identity and not beauty or aesthetic understanding.”

While the objects pointed out by journalist A. Matonis may be an eyesore due to their tragic and especially unappealing condition, the official stresses that the Department of Cultural Heritage cannot force owners to restore such objects and the procedures needed to attempt to force take an extensive period of time and are not always successful.

“We write demands, set deadlines, write up protocols for failing to meet demands, the owners are fined. The owners sometimes contest the fines at court, trials can take up several years. The end result, if we see it is hopeless, can be that we appeal to the court to permit the expropriation of property. This was the case with Kalnaberžė manor, the process took 5-6 years then,” A. Degutis recalled.

The Neringa municipality plans to apply to the Cultural Heritage Department with a request to list...