How many politicians working in the Parliament are still loyal to Russia? 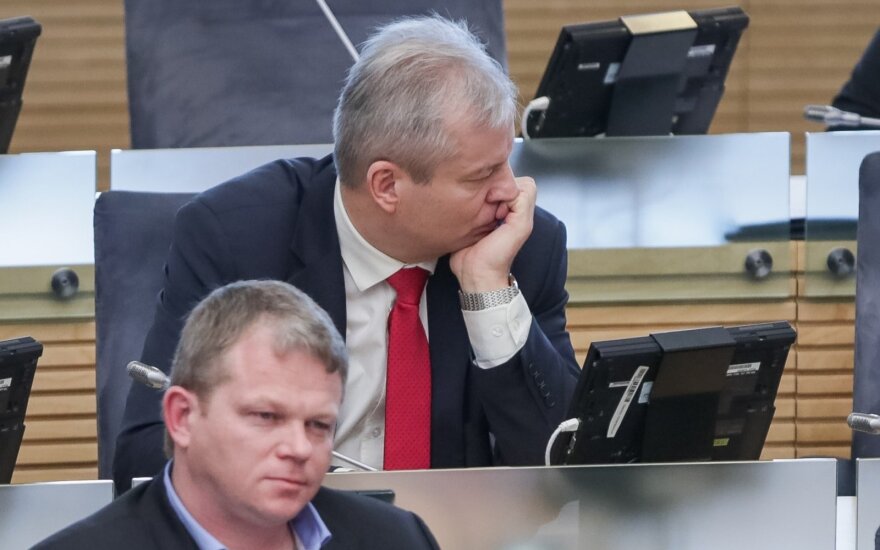 Mindaugas Bastys, who was recently said to have been operating against Lithuania, cannot be the only person in Parliament who is loyal to Russia. Parliaments’ National Security and Defence (NSGK) Committee members do not reject the possibility that security vulnerabilities allow such people to occupy powerful positions and participate in public affairs, TV3.lt reported.

A member of NSGK, former Minister of National Defence Rasa Juknevičienė said that she has considered that more people like Mr. Bastys work in the Parliament. "MPs are not specifically tested. Mr. Bastys case was noticed only when he asked for permission to handle classified information. I think there are more people in the Parliament who are working in favour of Russia.
I do not want to name names. But it is easy to figure out – the whole story of the liquefied natural gas terminal show people and their interests. You need to look at human actions, especially in the energy direction. All the State Security Department reports that are available should be put on the table. The sentences there are quite vague, but the point is clear, Russian interests are highlighted. Russia's interests in energy sector in Lithuania really stand out. It is therefore necessary to look at the history of LNG (Liquefied natural Gas) who is most opposed to the terminal, and things will fall into places ", - said R. Juknevičienė.

Related articles
PM’s Bastys Russian contacts and connections
Bastys: it is a pity that I do not remember a warning specifically

The Conservative said that Mr. Bastys case it did not surprise her completely. "There is a term from the Soviet era "useful idiot ". When a person, who has strange beliefs or is ignorant, is used. Bastys story did not surprise us. Those followed the situation have seen what is what. To notice such things, all of us need to grow, to learn and to understand what are the interests of Russia. There is also a big responsibility for voters - they are the first filter, which is passed by the Parliament members ", - said R. Juknevičienė.

The member of National Security and Defence Committee, who was also the Committee been the chairman for four years Arvydas Anušauskas also recognizes the security vulnerabilities. "I do not want to speculate, as I do not have specific information. On the other hand, there is no doubt that all kinds of people come to the Parliament. They were selected by voters who do not dispose of information about political relationships with other countries. As in the case of Mr. Bastys. The voters did not know who he communicates with and what his loyalties are. So people like this may get into the Parliament, who do not publish such information about. No one is requiring them to do so.

There may be more cases but we are under no obligation to shake and check each Parliament member. The most common affection of the other party's interests appears during the actions of the parliament member. For example, on the right time we declared that Lithuania needs energy independence. And one other politician defended the opposite position. In my opinion, it showed the interest of Russia. Some of those people now work in the Parliament or occupy other high posts. But again, it is difficult to prove a direct link, because it is often disguised as differences of opinion, "- explains A. Anušauskas.

Parliament NSGK leader Vytautas Bakas says that he does not have any concrete information about people who are possibly loyal to Russia in the Parliament. "I have no such data and do not want to speculate. They seek for uncertainties to happen. But there is an issue. Mr. Bastys in 16 years has been grown to have one of the highest political positions. This shows that there are gaps, opportunities for hostile forces grow themselves alongside loyal people. This is one of the lessons that we have learned. The Committee will return to this issue.

One of the aspects is how to ensure that the highest positions in the Parliament would be allocated only o people with flawless reputation, who are completely loyal to the people of Lithuania. The MP post already allows in accepting or formulating decisions related to the development of the state. It has no place to favour the interests of the people who are loyal to another state", - said V. Bakas.
When asked whether M. Bastys would suit the Soviet definition of "beneficial idiot, V. Bakas says that he definitely does not. “ I do not think the definition that you have mentioned definition is suitable for Bastys. As I am aware of the political kitchen I can assure you that it is not as easy to meet with the Prime Minister or the President of the Parliament. Meanwhile Bastys has been listened to.

Top management have answered to his calls, responded to his requests. He was close to the Prime Minister, held senior positions, and had authorization to handle classified information, although objectively he did not need that. Plus he has defended a dissertation. I would not rush to underestimate his abilities. For a common Member of the Parliament, who has average talents, it would be difficult to get such contacts and influence "- said V. Bakas.

NSGK has stated that Mr Bastys has acted against the Lithuanian state, the politician appealed to the General Prosecutor Evaldas Pašilys with a request to start an investigation on aiding another state to act against the Republic of Lithuania.

The Criminal Code provides that the person who aided another state or its organization to act against the Republic of Lithuania will be punished by imprisonment of up to seven years.

Bastys: it is a pity that I do not remember a warning specifically

Mindaugas Bastys , a member of the Social Democratic political group in the Seimas, says that he...