How “green” are the Farmer Greens’ decisions? 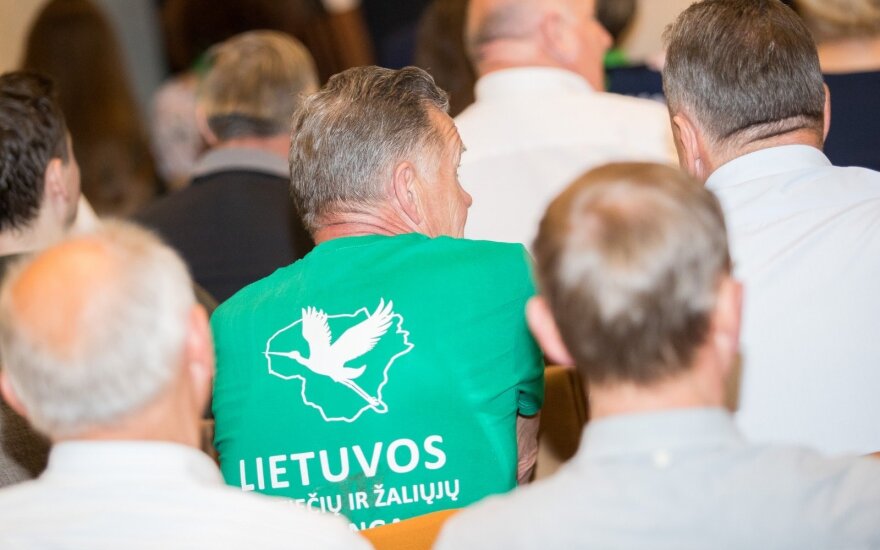 At the Farmers and Greens rally in Naisiai
© DELFI / Domantas Pipas

The Lithuanian Farmer and Greens Union won the parliamentary elections pledging to perform effective reforms and establish "harmony". Among other things, the electoral programme promised "harmony of man and nature", which was to be ensured through decisions related with ecology and propagating healthy lifestyles. Alfa.lt reported.

With 9 months passing since the first Seimas hearing dit is becoming clear that there isn't that much "green" in the majority's decisions.

A concerned world and Lithuania

Baltic Environmental Forum specialist Rita Norvaišaitė states that Lithuania is among the less developed countries in a European ecology context. The main problem of this is a lack of discussion on environmental protection matters in the public sphere.

Related articles
Rising tensions – for whom is Greta Kildišienė an obstacle?
Farmers' leader says relations with SocDems are good

The main environmental challenge we face nowadays is climate change. After several decades of silence, in 2015 at a Paris conference world leaders managed to reach a particularly important consensus on limiting air pollution and climate change.

Nevertheless, climate change receives little attention from the Lithuanian majority. Lithuanian Greens Party chairman Remigijus Lapinskas is particularly critical of the situation, stating that, "The whole world is discussing climate change and reducing CO2 in the atmosphere. <...> However the government is planning an increase in CO2 emissions in the country. <...> In my opinion planning this way is unacceptable."

Based on the government's plan, over a 4 year period, the amount of CO2 released into the atmosphere in Lithuania should rise by 5%, reaching 21 tons annually. Seimas Committee of Environmental Protection chairman, "Farmer" Kęstutis Mažeika states that the rise in emissions is mostly due to the construction of new cogeneration power plants in Kaunas and Vilnius. These were approved by the previous government. "The decisions have already been made, the processes are ongoing and we will have to fight with the consequences which is what we are doing," the politician says.

K. Mažeika muses that the recently passed forestry reform will also contribute to reducing air pollution. Supposedly there are discussions of easing the regulations under which forestries can plant new tracts of forest, which would contribute to "cleaning" air from carbon dioxide.

The other major environmental problem – the construction of Astravyets NPP in Belarus has not attract the "Farmers'" attention.

The lax attitude toward environmental challenges is encouraged by a society that sometimes disregards the issues.

The representative of the Baltic Environmental Forum R. Norvaišaitė notes that the public is only interested in specific ecologic problems, but not environmental protection in general. Thus climate change which is caused by carbon dioxide emissions into the atmosphere, poses little interest to Lithuanians. Especially if it would be painful to deal with the problem and would restrict economic growth, require implementing taxes on old vehicles and such.

If voters do not expect their politicians to resolve certain ecological problems, it is hard to expect any notable progress in environmental protection.

Questions which impact every person such as recycling receive far more attention. The "Farmers" have dedicated more attention to this. The Ministry of the Environment has taken up resolving the previous government's conflict with companies responsible for recycling. A proposal submitted to Seimas suggests to uphold an EU directive to ensure greater packaging recycling, refuse utilisation. According to K. Mažeika the citizens will also feel a change in the pricing for domestic refuse processing, which should be reduced from 2019.

"We have to explain to people that everyone would be aware where the fundamental roots of ecological problems lie. Every person's life in the future will depend on how we resolve problems now," R. Lapinskas says. According to the Lithuanian Green Party chairman, most Lithuanians do not link the recent rainstorms and their damage to climate change, thus awareness must be increased.

People's lack of concern to ecological problems and focus on only the aspects that directly impact them are perfectly reflected in the LVŽS leadership.

It is usual in the world that politicians who associate themselves to "green" ideology try to live while polluting as little as possible, sorting their trash, using public transport or bikes, living in ecological housing. Meanwhile a number of Farmer Greens are used to a more comfortable lifestyle.

Party chairman Ramūnas Karbauskis is the head of a conglomerate that produces chemical fertilizer, owns a large amount of real estate and drives around in a Cadillac Escalade SUV which uses 10-18 litres of fuel per 100 kilometres. For a time the deputy party chair Greta Kildišienė appeared in public with a seal skin coat, the import of which is banned in the EU in order to reduce the scale of hunting on these animals.

Other Farmer Greens party members also do not opt to ride bikes or drive hybrid cars. Supposedly their prices are too large, thus it is more economical to drive a regular diesel.

Hybrid and electrical car prices could be reduced by certain state subsidies and exemptions, ensuring cheaper or free parking in city centres or such. This is a practice taken up by a number of Scandinavian countries.

Meanwhile Lithuanian parliamentarians and ministers are currently shunning ecological cars. Environmentally friendly vehicle prices are not only not compensated, but upon purchasing an electric powered vehicle, it can be a struggle to find a charging location. Today there are only 29 charging stations in Lithuania in the major cities and along the highway Vilnius – Klaipėda, as well as in Nida.

The chairman of the Committee of Environmental Protection K. Mažeika states that the "Farmers" are considering VAT exemptions for those seeking to purchase an electric powered car, but how long concrete decisions will take is unknown.