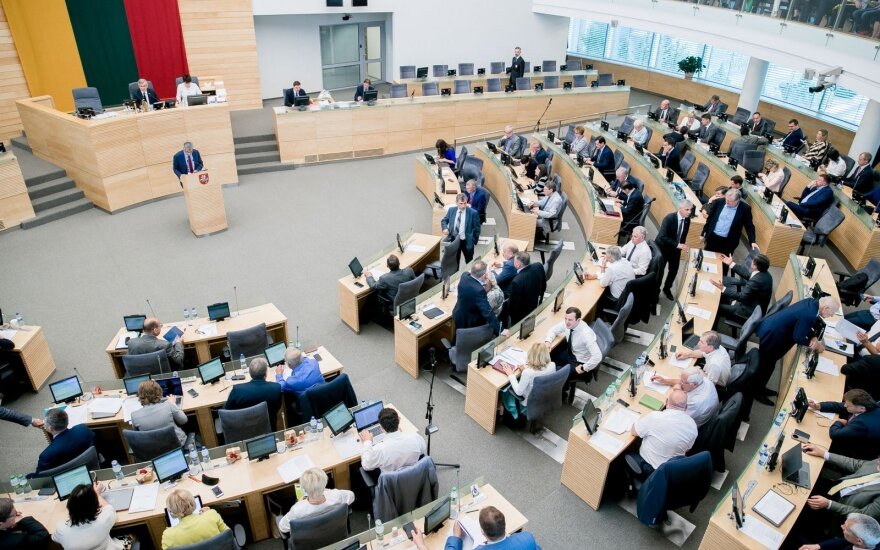 Both the majority and opposition predict that the new political season starting with the autumn session next week will be tense. The atmosphere will be heated not only by various politicians' agenda questions, but also three looming elections, lzinios.lt writes.

On September 10, MPs will return to work in the autumn Seimas session and are already arranging their work. As one of the most important upcoming decisions, they highlight the passing of the state budget for next year. The Seimas will also decide, what to do with the referendum law amendments vetoed by President Dalia Grybauskaitė, which would have lowered the bar for the referendum on dual citizenship. Also decisions will be made on the healthcare institution law and linked legislation changes, which aim at optimising the network of healthcare institutions.

In recent days, politicians have faced criticism from the head of state for destructive revenges, causing political turmoil and settling of accounts. D. Grybauskaitė warned that if such a situation continues, the country would not develop. However, it would appear that the political autumn will not be any easier.

First deputy Seimas speaker, "Farmer" Rima Baškienė is convinced that the coming session will be productive and intensive. She mentioned that just the cabinet has presented more than 100 legislative projects for consideration. The Seimas groups and individual MPs also have numerous initiatives.

According to R. Baškienė, the Seimas autumn session is important in that it discusses and passes the state budget for the coming year. The project for the main state financial document must be registered by mid-October. "We have projected that it will be presented on October 18, then intensive negotiations will begin," she explained. The first Seimas deputy speaker also emphasised that MPs will have to return to unfinished work and laws vetoed by President D. Grybauskaitė from the spring session.

The politician explains that parliamentary control will continue receiving attention. For example, Minister of Education and Science Jurgita Petrauskienė will be invited to a Seimas plenary meeting on the second day of the autumn session to present information, how changes to teachers wage payment and other issues and laws curated by her are proceeding. Further discussions are to be held, which will apparently allow delving into further depth and understanding the importance of various issues. Say, the MPs plan to discuss, how Lithuania appears in the European Union context.

"Perhaps we need to return to the policies of reducing poverty. Statistics have displayed what I would say are distorted sizes, which were based on 2016 data. However, the topic of poverty is relevant and so is demographics. We will certainly return to these topics," R. Baškienė promised.

According to her, this week, on Thursday, the Seimas board and Seimas group representatives will hold a traditional meeting with D. Grybauskaitė and will discuss news, planned work. R. Baškienė found the head of state's criticism over political turmoil to be correct. She notes she has been hearing the same from citizens in various meetings.

"People want to see consistent, rational work. To put it lightly, the miscommunication of groups, opposition efforts to sometimes cause destruction, not vote, withdraw cards so that legislation is not passed – we have seen this at the end of the spring session – bring no joy. It would be better if this were not the case. It is laudable that the president reminds of this. I believe that not only the majority, but also the opposition will hear that there is a need to seek compromise and work," the politician said.

Seimas deputy speaker, Lithuanian Social Democratic Labour Party chairman Gediminas Kirkilas stated he believes the new political season will be tense. Firstly because of the looming municipal, presidential and European Parliament elections in the first half of next year. "The political season will proceed de facto during the electoral campaign. This, of course, will raise tensions greatly. That said, earlier seasons were not easy either," he explained.

G. Kirkilas levied criticism at the opposition, which the majority has been unable to come to agreement with on important issues. One of them, according to the politician, is the proposed political party agreement to consistently raise national defence financing so that in 2030, 2.5% of GDP would be dedicated to it. Furthermore, Minister of the Environment Kęstutis Navickas is once again threatened with impeachment.

The Social Democrat Labour leader agreed with the president's opinion about the political situation in the country. "However, in this case it should be specified, who the initiators of the tensions are. In my opinion, it is primarily the Conservatives, who failed to form a ruling coalition and immediately, as usual, attacked other parties. I believe that there is much discontent within the party itself," he said.

The politician named the passing of the 2019 state budget as the most important task for the autumn session. He had no doubt that MPs will have numerous further proposals, what to finance, what exemptions to provide and such. He also predicted that there would be numerous discussions on legislation vetoed by the president. The Social Democratic Labour members in Seimas intend to present 40 pieces of legislation, most of them being related to social security, as well as some for healthcare reform.

Deputy prefect of the largest opposition Seimas group, the Homeland Union – Lithuanian Christian Democrats Jurgis Razma mused that the overall political background will greatly depend on the upcoming elections and, for example, on whether Prime Minister Saulius Skvernelis will aim for the post of president. "It cannot be dismissed that certain actions of the Seimas will be linked to the elections. There could be certain manifestations of populism. We are already seeing one such element – the idea of a referendum on reducing the number of members of Seimas," the conservative MP said.

With the upcoming municipal elections, J. Razma believes that the majority will seek to portray itself as caring for regional politics even if their actions so far have shown something else. Take for example the Minister of Healthcare Aurelijus Veryga's initiatives on reform in regional hospitals, forestry changes and such. "The other matters in the Seimas autumn session are traditional. The main discussions will revolve around the state budget. This is an incomparably more important document than any single legislative project. We do not yet know its outline, but it would seem that due to the upcoming elections, the request line will be much more filled," he guessed.

According to J. Razma, the Conservatives will focus on the most important areas, which need decisions in the Seimas, will analyse the situation on ongoing reforms, such as general education financing changes. However, in his opinion, it should not be imagined that the opposition group could shift the direction of key decisions in Seimas. "Especially when we see in this term how all our ideas are blocked, rejected, not even allowed access. Of course, this does not leave room for enthusiasm in preparing any significant projects because they are likely to be rejected by the ruling coalition. I believe that we will limit ourselves more to amendments and efforts to warn the public, when the majority makes mistakes. However, our traditional concern over national security, education, social and economic questions will mean we will propose certain projects," the opposition representative said.

The prefect of another opposition Seimas group, the Liberal Movement, Eugenijus Gentvilas predicted that the coming political season will be tender. The majority's camp is still boiling with vengeful moods – they are intent on investigating D. Grybauskaitė's correspondence with former Liberal leader Eligijus Masiulis, the actions of the Conservative cabinet.

According to the liberal, many passions will arise from the president's veto on healthcare institution reform. In addition, the implemented, but limping adjustments to teachers' wage payment. "Of course there is the budget. It will be special because tax and pension reform was passed in summer, which demands a radical review of budget rules. Earlier this did not change for many years, thus it was only a matter of entering different numbers. Now the budget is fundamentally changing. No project is to be seen. We are to receive it in mid-October in Seimas. However, I am concerned that it could be belated or the bulldozer turned on again," E. Gentvilas cautioned.

The Liberals have presented around 50 pieces of legislation for the Seimas autumn session. Priority targets are strengthening municipal rule and the regions. However, E. Gentvilas has no illusions that the majority of projects will enter the Seimas plenary meeting agenda. He mentioned how in the previous, spring parliament session, from more than 50 registered legislative projects, the Liberals were only able to present four during Seimas plenary sessions. "We enter our projects into the Seimas session's work programme ahead of time, but the majority do not include them in the agenda. When, for example, someone like Agnė Širinskienė or Mindaugas Puidokas register projects with three days left to the end of the session, they pass all the stages," the Liberal leader decried.

According to E. Gentvilas, if the Seimas "Farmers" manage to sign a cooperation agreement with the opposition Order and Justice Party group, the majority would grow stronger and would not even need to consult and adjust their position together with the opposition. "I fear that this could be an even crueler bulldozer. Ramūnas Karbauskis is emotionally and politically charged when he reaches a victory. He craves victories, has no need for agreement from the opposition or president. Thus, the confrontation stems from him. How many times we have seen that an opposition project is rejected and then an identical project from the majority appears and is passed. They are smiling and mocking – "Look at the opposition, we do what we want to it,"" The liberal said.

It is believed that the "weather" of the coming political season will primarily be decided by the three elections to be held in the first half of the coming year - municipal, presidential and European Parliament

The Seimas is likely to override President Dalia Grybauskaitė 's veto on amendments lowering the...

S. Skvernelis: the post of prime minister would be an obstacle in the elections