(4)
H.E. Mr. Shen Zhifei, Chinese ambassador to Lithuania, Corporate Client article
aA
Recently, Dalai Lama came to Lithuania, which has aroused a lot of interest from Lithuanians in China’s Tibet. I would like to systematically tell readers the true story of Tibet, which is helpful to know the reality.
Sekite svarbiausias naujienas socialiniuose tinkluose! 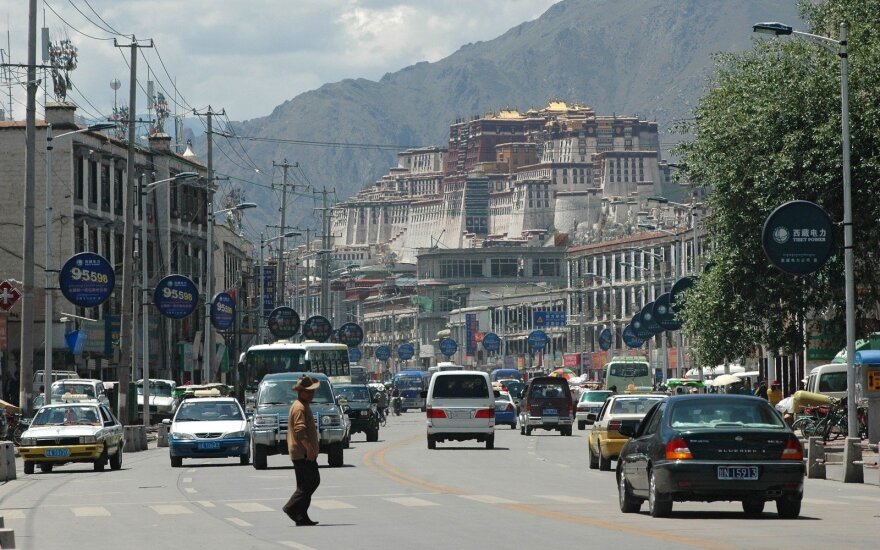 In Lithuania, some individuals think Tibet is similar to Lithuania, that was once an independent country in history. This view is ridiculous and shows the lack of understanding of related historical facts.

In 1240, the Grand Duchy of Lithuania was established. From then on, the Lithuanian people have their own country. In the next several centuries, the Dynastic union with Poland, across the Baltic Sea and the Black Sea and with the vast territory and the developed economy, was established by Lithuanian people. Because of many external interventions, the destiny of the nation was once not in your own hands. The Act of Independence in 1918 marks Lithuanian modern statehood of international recognition. After the World War II and the complicated changes that followed, Lithuania resumed its independence in 1990 and became a member of the United Nations in 1991. This is briefly the Lithuanian history.

Then let's see Tibet history. In 1247, the local authorities of Tibet voluntarily subordinated to the Chinese central dynasty and officially incorporated itself into the Chinese territory. For more than 700 years since then, the Tibetan local regime had always been conferred by the Central Government, executed the Central Government's decree just as an administrative region under the jurisdiction of the Chinese dynasties. The Chinese Central Government had always effectively exercised sovereignty over Tibet by controlling and overseeing the local administrative organs, such as the appointments and dismissals of Tibetan local officials, the inventory of the residence of the population and the stationing of troops. The Dalai Lama and the Panchen Lama, which were the titles of the two living Buddhas of the Gelug Sect of Tibetan Buddhism, were all conferred by the Chinese Qing Dynasty Court respectively in 1653 and 1713. The religious and political status in Tibet of the Dailai Lama and the Panchen Lama were also determined by the Central Government. Tibet has never been an independent country and no government in the world has ever recognized Tibet as an "independent country". China is a country with 56 ethnic groups. Tibetan is a component of the Chinese nation. Their rise and fall is also related to the overall destiny of the Chinese nation because we are compatriots living in one big family.

In recent history, the Chinese nation had suffered from foreign aggression and interference, experienced untold suffering and vicissitudes. From the mid-19th century, the attempt of the imperialist and colonial powers to split China was made public, and then the so-called "Tibet independence" was concocted. However, this conspiracy never succeeded. The fact that Tibet is the part of the Chinese territory has never been changed and the Tibet region has never been "independent" from the jurisdiction of the Chinese Central Government. After the People's Republic of China was founded in 1949, Tibet underwent the democratic reforms, which was part of the historical process of the birth of the New China. After the democratic reforms in Tibet, the Tibet Autonomous Region with high autonomy was established in 1965 with the Tibetans as the mainstay.

From the historical point of view, Tibet has always been a local administrative region of China and cannot be compared with an independent country like Lithuania.

The true face of the Dalai Lama

Those who have some knowledge of history know that Tibet during the Dalai Lama period was under the feudal serfdom regime of the dictatorship of the monks and nobles of the upper class with the combination of politics and religion. At that time, 95% of the Tibetans were slaves who did not even have their personal freedom. They could be arbitrarily traded, trafficked and even often subjected to harsh lynching. Its darkness and cruelty were worse than the serfdom in medieval Europe. The old Tibet is known as "one of the areas of the most serious human rights abuses in the 20th century." The Dalai Lama, as the supreme ruler of Tibet, had an inescapable responsibility for this. He was the real culprit in trampling on human rights and freedom in Tibet. The Dalai Lama never dared to talk about his brutal rule in old Tibet with no intention of repentance. Instead, he proclaimed himself as the "spokesperson" for freedom of Tibet and the "defender" of human rights and humanity, attempting to deceive the international community.

The democratic reforms of Tibet in 1951, including the stationing of the People's Liberation Army in Tibet for national defense, was welcomed and supported by the Dalai Lama himself and the vast majority of the Tibetan people. In 1954, the Dalai Lama served as Vice Chairman of the 1st National People's Congress of the People's Republic of China, the supreme national body he swore to be loyal to. In 1959, the Dalai Lama betrayed his solemn promises made to the country and the people, failed the trust of the Central People's Government, and launched armed riots in Lhasa. He collaborated with foreign forces, aiming at splitting China. With the support and help of the Tibetan people, the riots were quickly settled. The Dalai Lama fled abroad after the failure of riots. From then on, he embarked on a path of confrontation with the Chinese Central Government and engaged in numerous activities to split his motherland. Regardless to whatever "halo" or "laurel" on him, the Dalai Lama is essentially a complete national separatist.

If someone regards the Dalai Lama a "spiritual leader" , then he is only the spiritual leader of the Tibetan separatists. As the "godfather" of the Tibetan separatists and separatist forces, the Dalai Lama all the while disguises himself to be "peaceful" and "friendly", propagandizing the so-called "middle way". But his real intention is to carry out separatist actions of China by inciting ethnic hatred. The Central Government of China and the great majority of Tibetan people do not and will never agree to the so-called "Tibet independence" and the restoration of feudal serfdom regime in Tibet, because it will bring Tibet back to the time when serfs were everywhere and the people lived in hell, while the upper ruling class could arbitrarily do anything in their "lawless land".

The Great Progress in Tibet

History and facts cannot be distorted. After 1959, especially in the last 40 years since China's reform and opening up, Tibet has achieved rapid development in economy, society, education as well as culture and undergone tremendous changes from darkness to brightness, from autocracy to democracy, from backwardness to progress, from poverty to prosperity and from isolation to openness. In 1951, Tibet's GDP was only 129 million yuan (less than 20 million euros at the current exchange rate), with a population of 1.15 million and an average life expectancy of 35.5 years. Through the unremitting efforts of the Central Government and people of all ethnic groups in Tibet, in 2017, the GDP of the Tibet Autonomous Region has reached 131.06 billion yuan (approximately 17.5 billion euros), with a population of 3.14 million and an average life expectancy of 67 years. In 2017, the central government transferred 49.5 billion yuan(approximately 6.66 billion euros) as budget subsidy to the Tibet Autonomous Region to support Tibet's economic and social development, including the protection of its original language, culture and heritages. The construction of the Qinghai-Tibet railway, along with the highway and air transportation network to the world, makes the snow-covered plateau no longer remote and brings to Tibet new opportunities of development. The Central People's Government and the People's Government of the Tibet Autonomous Region pay particular attention to respecting and protecting the inheritance of Tibetan culture, the people's freedom of religious belief and legitimate religious activities. At present, there are more than 1,700 temples and venues for various religious activities in Tibet. More than 46,000 religious professionals have been registered and various religious activities of the general believers are conducted normally. Important religious festivals or events are celebrated every year as scheduled. The ancient buildings and religious temples and cultural sites, such as the Potala Palace, Jokhang Temple and Norbu Lingka, have been listed as World Heritage Sites. The literary and artistic works, such as Gesar Epic and Tibetan Dance, are included in list of the Chinese national intangible cultural heritage. The restoration and protection of the ecological environment in Tibet has been highly valued and continuously improved by the Central Government. The Tibetan region is changing the image of poverty and backwardness to vitality and prosperity.

Old Tibet is not the "Shangri-La" that some people dream of, but rather "hell on earth" for millions of the serfs. Today, it is impossible to bring Europe back to the dark age of more than 500 years ago. Likewise, it is impossible either to bring Tibet back to the dark time of Dalai Lama feudal serfdom. We can only say that those, who have turned a blind eye to or denied Tibet's drastic changes and historical achievements in the development process of China's reform and opening up, maliciously discredit history and reality and wantonly trample on China's core interests with their sinister political purposes. This is absolutely not a real concern to the Tibetan people and helpful to the development of Tibet.

Only by reading history can we see through the true face of the Dalai Lama and understand the past and present of Tibet. I welcome more Lithuanian friends to visit Tibet. You will see Tibet in the new era and hear the true voice of the Tibetan people.

The Dalai Lama on Wednesday planted an apple tree in Tibeto Skveras, a small park in Vilnius named...