Gintautas Vėlius | ldkistorija.lt
aA
A grave of a 45–50 year-old woman, dating back to the 14th century, was unearthed by archaelogists in the Kernavė burial site. The woman‘s skull was turned round and laid in the chest area. The bones of her arms, severed at the elbows, were found between the legs of the deceased woman. The bodies of deceased persons whose heads were decapitated or limbs severed should be related not to burial rites but to exhumation and defiling of corpses, caused by the deceased person in person. In this particular case, archaeologists are likely to have discovered a grave of an apparition or a “vampire”. 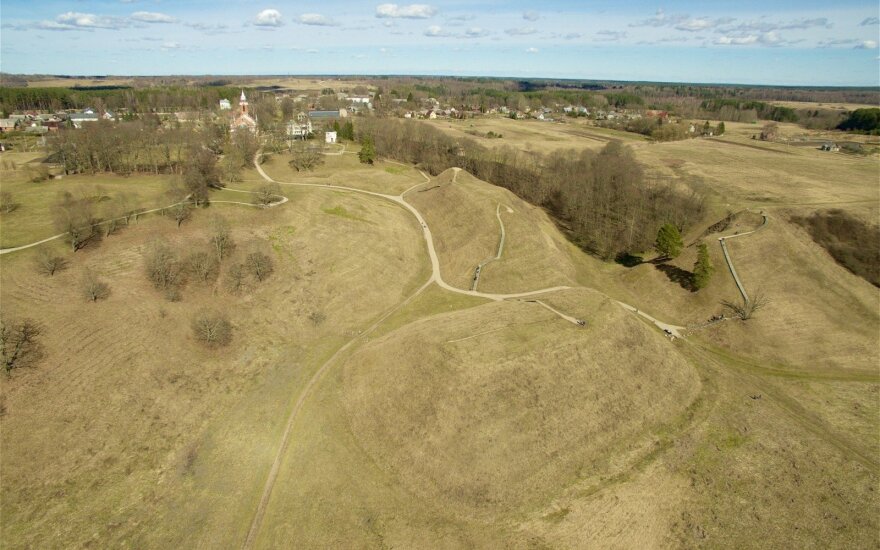 The grave of a 45–50 year-old woman, dating back to the 14th century, was unearthed by archaeologists in the Kernavė burial site. The woman was found traditionally positioned in a supine position, with her feet outstretched. Her skull, however, was turned around and placed in the chest area. The bones of the arms, severed at the elbows, were found between the legs of the deceased woman. Ornate silver plated earnings were discovered in the area of the ears. The conclusion was drawn that the head and arms had been severed prior to disintegration of the soft tissues. Who was this woman and why was she buried beheaded? The data from archaeological research is insufficient to answer such questions.

Similar graves have been discovered in other burial sites in Lithuania. During the archaeological dig of the interior of St. Anne-Barbara church, located in the territory of the Vilnius Lower Castle, a dead skeleton, the head of which was severed and placed under the shoulders, was discovered. In several graves of the Alytus burial site the skulls were found 'not in the place where they should be' or there were no skulls located. In the Baltic countries, graves with the skulls placed by the side of the skeleton, were discovered in Prussia, in the 13th century Vėluva burial site. Archaeological research authors relate these graves to ostensibly pagan burial rituals, which reflect the struggle with vampires among the baptised Prussians. The archaeological data suggests that a custom was observed in the 18th century to decapitate the heads of the perceived vampires and place the heads between the legs, in the hope that the vampires would not harm the living. A reference to the Prussian Code of Law, provided by the archaeologist Eugenijus Svetikas, should be cited in this context, stating that 'decapitating or severing of a dead person's head is an offence, repayable with half a mark'. There is some mention of the existence of such a rite in Lithuania as late as the interwar period with stories told about beheaded vampires.

Usually burial rites and rituals were meant to flatter the deceased, seeking peace for both the dead person and the living. However, in the above mentioned cases, a negative attitude toward the deceased can be discerned. There is little likelihood, if any, of execution in these cases, as an act of punishment for the sins unknown to us. This hypothesis is proven by the fact that at first the dead were neatly buried alongside the other members of the community. A beheaded woman in Kernavė was adorned with ornate earnings.

Another reason for explaining the rite of beheading the dead could be related to the necrophobic nature of beliefs and rituals, which abound in our mythological legends and stories. The dead are believed to sometimes have come back to intimidate and harm the living in various ways. In such cases, the dead person would be exhumed and decapitated. The Lithuanians had plenty of names for such apparitions, like vaiduliai, vaiduokliai, vaidinuokliai, velioniai, nelaikiai, prisidavėjai, kraujasiurbiai or vampires. The names in most cases were used to describe the persons who died not of natural sources, in an accident, who were murdered of committed suicide (particularly those who hanged themselves), offenders and sinners, magicians and infidels. The deceased persons who kept returning from the dead in those stories were usually regarded as negative personalities in real life, described as: an angry landlord, a wicked person, having an obsession with vodka, one who died without a priest, never made confessions, a fallen woman consorting with the devil....

According to the legends, the restless and haunting body of the deceased was unearthed and beheaded by a specially hired person, experienced in this particular "business". Decapitation was performed not in any seemingly random manner, but "moving backwards" ("atatupstu lidziumi"). A decapitated head was placed between the legs of the deceased person to make sure that he/she cannot reach it and put it back, where the head belonged. There is an abundance of narratives, in which parishioners are given such advice by the priest, who instructs them to protect themselves in such a manner against being haunted by apparitions. According to Jonas Balys, who is known to have collected a number of such stories 'This was not an invention dreamed up or invented by Lithuanians; however, such an atrocious measure seems to have actually been resorted to in our country not that long ago". Faith in blood-suckers and vampires is regarded by Jonas Balys not as local practice but one borrowed from Slavic culture. The Slavic origin of the vampire as a form of necrophobia is recognized even today. In the rare Lithuanian narratives about bloodsuckers and vampires there is no mention of decapitation practice or of their burial rites as such. Therefore there are no reasonable grounds for relating the decapitated bodies of the deceased individuals identified during archaeological digs to these mystical creatures. In the Lithuanian stories and even mythological legends, this ritual was performed merely on or over the deceased persons who kept haunting the living, in most cases those who did not die of natural causes, who committed suicide or lived as sinners. The bodies of deceased persons whose heads were decapitated or limbs severed, should be related not to burial rites but to exhumation and defiling of corpses, caused by the fear of being haunted by the deceased person in question. Thus, the grave of the decapitated woman is a ritual that illustrates the struggle against being haunted by the deceased persons, caused by necrophobia.

Vilnius was a vibrant trade centre in Eastern Europe in the mid 15th century. Merchants from various...