Germany, Lithuania on opposite sides of NATO divide on Russia

the Lithuania Tribune, DELFI
aA
The NATO-Russia Council meeting last week did not seem to bring any tangible results, but it was preceded by the usual clash of opposing positions within NATO, one side advocating for engaging in dialogue with Russia and the other sceptical about Russia's interest in genuine engagement. 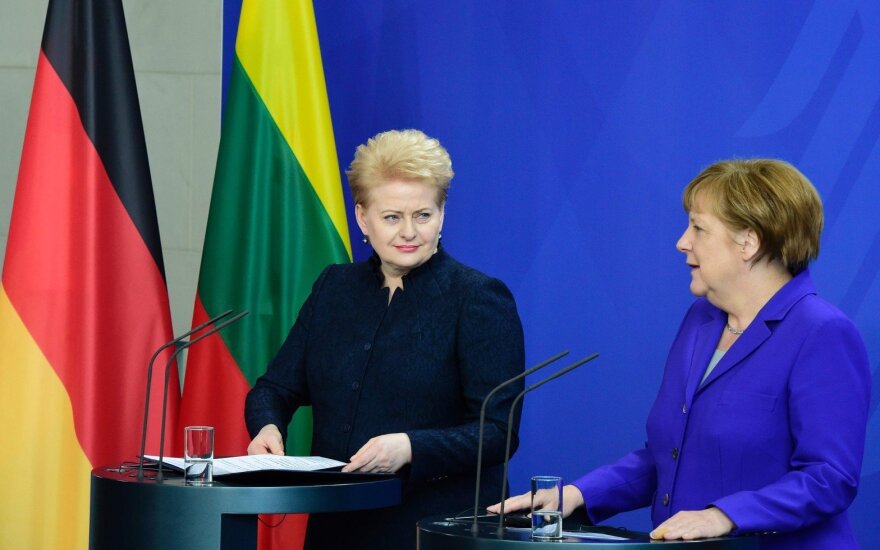 The first position, in favour of dialogue with Russia, is often heard coming most often from German politicians while Lithuania has been consistently siding with, if not pushing, the latter.

Western governments have repeatedly emphasised that returning to "business as usual" in relations between NATO and Russia is out of the question unless Russia sticks to international law. This primarily means ceasing aggression against Ukraine.

Nevertheless, the two-year absence of the NATO-Russia Council, ushered in by Moscow's occupation of Crimea, ended last week mostly at the insistence of German diplomats.

Tensions between Russia and Germany, arguably the most consequential country in today's Europe did not go away and were consistently lurking in the background in the run-up to the meeting. Lithuanian President Dalia Grybauskaitė, who visited Germany last week, gave a long interview to German radio Deutschlandfunk, where she said that Russia was the single biggest threat to the alliance.

"Our experience with Russia prevents us from believing what it is saying. We are following what they are doing and we assess their actions based on facts. And these, especially the latest developments, do not indicate that Russia is moving closer to Western positions. Russia is demonstratively aggressive towards NATO allies and other Western countries," Grybauskaitė said.

Moscow used the spotlight before the meeting to voice its irritation with growing NATO forces in "Russia's neighbourhood".

"All this is accompanied by an aggressive propaganda campaign aimed at demonizing Russia. NATO is undergoing an identity crisis. And it is looking for enemies to give meaning to its existence," Russian Foreign Minister Sergei Lavrov said.

Russian Ambassador to NATO Alexander Grushko was equally assertive. He said that the alliance was pushing Russia into confrontation. He said that Russia-NATO relations had been "very bad" over the last two years.

"We are today in a dangerous situation which is undercutting security in many areas that had been calm and secure for a long time," he told the German newspaper Welt. "Our earlier partnership no longer stands, there are no more joint projects that could bring us back to better relations in areas where we have shared interests."

Grushko also slammed NATO's policies towards Russia. There is "no future" for an approach which pursues deterrence and dialogue at the same time, he said, adding that NATO had to make up its mind what kind of rapport it wanted with Russia.

He rushed to add that, at any rate, Russia was ready to talk to NATO, despite the many disagreements.

Latest incidents do not help

Alexander Bastrykin, head of the Russian governmental Investigative Committee, seconded Grushko's statements, accusing the United States and its allies of waging a hybrid war against Russia, ironically the same accusation that the Baltic and other European countries have been voicing against Moscow.

Russia's peaceful intentions did not sound convincing after several provocations over the Baltic Sea, where Russian fighters performed several close flybys over an American warship.

The provocative nature of these incidents leaves no doubt for Russian independent military expert Alexander Golts:

"Clearly, the Russian pilots were doing it on purpose. They had the green light from above. It is the only explanation for the fact that these incidents followed one another. Russia is doing something similar to what it did in Syria. It is making every effort to give the impression the state of affairs is as dangerous as possible. Even Western powers will then be ready to negotiate."

What the incidents over the Baltic Sea brought home is the need to talk, said NATO Secretary General Jens Stoltenberg last week when addressing EU defence ministers in Brussels.

How strong is the Alliance?

Before the NATO-Russia Council meeting, the German media noted that Eastern European countries had no illusions about Russia or the sincerity of Moscow's cooperation calls.

They quoted the Lithuanian president who met with Germany's President Joachim Gauck and Chancellor Angela Merkel.

"Russia's behaviour in the Baltic States and other countries that are not part of NATO, like Sweden, shows that Russia feels weakened in the international arena and is using military might to show what it can do. Russia is using violence to force her way back to the table with the Western powers," Grybauskaitė was quoted as saying.

Deutschlandfunck also noted that Lithuania had reintroduced military conscription and expressed relief when the American Department of Defense promised to send tanks to Eastern Europe next year.

Poland's President Andrzej Duda was more moderate, German commentators said, quoting him on the point that Russia should not be isolated.

However, just like his counterparts from Lithuania, Latvia and Estonia, Duda urged NATO allies to increase their presence in Eastern Europe and be tough in talks with Moscow. Russia is testing how much it can push the Alliance, he said.

Wolfgang Ischinger, the chairman of the Munich Security Conference, has consistently advocated for friendlier relations with Russia.

"We don't need new steps towards rearmament, but on the contrary more disarmament: verbally, politically and militarily," he said before the NATO-Russia meeting. "The threat of intentional or unintentional military escalation between the West and Russia has never been so big over the last 25 years as it is now."

With his comments, Ischinger appealed to Eastern European countries which were blocking German politicians' attempts to revive the NATO-Russia Council.

"Their motto was that until the Ukraine conflict is resolved, one cannot act as if nothing had happened," the German daily Handelblatt said.

The German leadership, on the contrary, advocated for reviving contacts between NATO and Russia.

"We live in a world full of risk and if there are opportunities to lower the risk by exchanging information, we should use that opportunity," Germany's Foreign Minister Frank Walter Steinmeier was quoted as saying in laying out the position of his government. He added, however, that he did not have much hope for positive results.

Lithuania's Foreign Minister Linas Linkevičius is quoted by Handelsblatt as the spokesman of the Eastern Europeans. He said he was sceptical about the renewed talks and he said that his impression was that Russians were all talk and no action.

If diplomacy is used as a tactic of diversion, such diplomacy was deplorable, Linkevičius said.

Germany has plans to join the NATO Energy Security Center of Excellence (ENSEC COE), based in...

NATO-Russia meeting 'did not bring sides closer on any issue'

Lithuania's envoy to NATO says that the first meeting of the NATO- Russia Council since June 2014...

Linkevičius on NATO-Russia meeting: 'I would like to be wrong in my scepticism'

NATO to renew dialogue with Russia

NATO and Russian officials will meet for the first time in two years on April 20.

Attacks in Brussels last week were not an assault against NATO , US Ambassador to the North Atlantic...