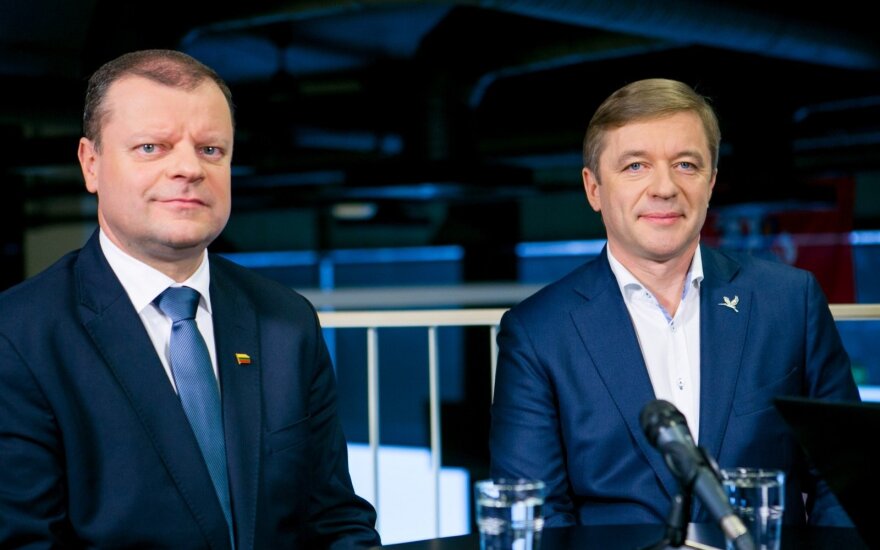 The "Farmer" forest and forestry reform is getting increasingly bogged down. Though the party and Seimas group leader Ramūnas Karbauskis is attempting to spark a faith in everyone that by extending the Seimas session, the famous Forest Law will be passed, such pursuits of his are supported by less than 71 members of Seimas. This is how many votes would be necessary for the reform to be enacted.

"I promised to R. Karbauskis I would strive that not a single Liberal would vote for the forestry reform he is pushing. This is because of the refusal to include the alternative Forest Law project I registered and had lawyers review in the Seimas agenda and to note, the project would benefit the "Farmers"," assured Liberal Movement Seimas group head Eugenijus Gentvilas.

Related articles
Evaluating the concluding Seimas session – “Farmers” lied to the electorate
Why everyone wants to reform the forestries, but speak of the PM’s resignation?

He is also unsure why just as the discussions of extending the Seimas session began to aid in passing the Forest Law, Prime Minister S. Skvernelis and R. Karbauskis began to threaten to create a special commission to review parliamentarians' links to the forestry industry.

Not one, but two commissions could be formed

S. Skvernelis announced last week that he received information of numerous breaches of conduct in forestries. This would apparently allow the initiation of a special commission whiwh would not only investigate breaches of conduct, but also the links of foresters and parliamentarians.

"I agree to the formation of such a commission and when it is formed in Seimas I will register a proposal which would request the investigation of whether PM S. Skvernelis, R. Karbauskis, Seimas Committee of Environmental Protection head Kęstutis Mažeika and Minister of the Environment Kęstutis Navickas are not linked to major lumber processing businessmen Sigitas Paulauskas, Gintautas Pangonis, Andrius Zimnickas and others.

That minister K. Navickas is involved is obvious because his cousin has a major lumber processing company. I will request the commission to also investigate the fact, why after his appointment K. Navickas travelled to Klaipėda for a meeting with S. Paulauskas. Is it a presing part of his work as minister?" mused member of Seimas Algimantas Salamakinas.

The politician does not deny that during his four year term as the head of the Seimas Committee of Environmental Protection in the previous Seimas, he met with forestry representatives a number of times in an effort to help resolve issues pertinent to them. According to A. Salamakinas it is a direct part of the Seimas committee head's work.

Conservative leader G. Landsbergis stated that his Seimas group would support the formation of the commission proposed by the Prime Minister, but was surprised that talks of breaches in forestries only began now, stating that "On the other hand, why is S. Skvernelis not passing the information about breaches to law enforcement? Either way we are in favour of an investigation if need be."

A. Salamakinas is certain that the information on breaches in forestries is a minor issue compared with the forestry reform primarily being necessary for major lumber processing businessmen: "After all they are not even hiding how many forestries there will be, they do not care. Most important is to purchase lumber cheaply in Lithuania and destroy the Lithuanian forest system, which is currently one of the best in the world. The breaches S. Skvernelis is talking about are along these lines – driving through the forest in vehicles and thus damaging the undergrowth, incorrect pruning of tree branches. These things happen on a daily basis in forestry work."

E. Gentvilas and his group are also not opposed to the formation of a commission, but was surprised by the "Farmer" stance that if someone disagrees, they must have vested interests or have made breaches.

"I own plots of forest and have sold to lumber mills and processing companies through intermediaries. I have no links with the forestries except when in 2007 the Kuršėnai forestry prepared a plan to plant forest trees. I planted 51 thousand trees. This is why I have an understanding of forests. But this is no reason to oppose the forestry reform being pushed by the "Farmers," even if R. Karbauskis believes that those who oppose their reforms have material interests or even criminal links. If the "Farmers" investigate the Social Democrats, I will request to be investigated as well," E. Gentvilas stated.

Why is the cabinet avoiding accountability?

E. Gentvilas is convinced that the forestry reform could be enacted much simpler than the "Farmers" and PM Skvernelis plan to.

The liberal pointed out that the forestries are state owned companies and the State and Municipal Owned Company Law outlines that all decisions on these should be made by the cabinet.

"The "Farmer" and cabinet effort to "push" the forestry reform through Seimas indicates that the cabinet, just as in the case of the Labour Code, is evading accountability and is trying to cover itself with the Seimas. My legislative amendment which was refused entry into the agenda last Friday, despite R. Karbauskis' promise on Tuesday to include it, states "go and work." But they are avoiding it.

This is why I told both S. Skvernelis and R. Karbauskis that if they take this path, they risk to lose everything. What will the cabinet look like if the Seimas does not pass the reform? Accuse the opposition for the failure? Let them not seek cover behind the opposition, but if they want to suicide, let them," E. Gentvilas did not sugar-coat his words.

He assured he is certain that if the forestry reform currently being discussed in Seimas would be returned to the cabinet, then neither S. Skvernelis, nor cabinet member K. Navickas would agree to it, they would rationally think through everything – perhaps it would be better to agree to the proposals of the Social Democrats and specialists?

Social Democrat Seimas group prefect Andrius Palionis claimed that the "Farmer" proposals to establish a single forest management company and reduce the number of forestries from 52 to 25 and take away their status as a juridical person would not pass. The group has made the decision to vote for the decision to reduce the number of forestries, but they would keep their juridical status.

Extending the Seimas session again if need be

When asked if the "Farmers" are seriously intent on creating the commission proposed by S. Skvernelis to investigate potential links between the forestry industry and parliamentarians, R. Karbauskis assured the decision has yet to be made.

He explained that the thought of creating such a commission could come to the PM because the forestry community is unaware of the breaches in the forests and neither does the information reach the public eye.

The "Farmer" leader is certain that the foresters must know of these breaches. He stated he currently has information that after investigations in twelve forestries, 1400 breaches have been found, up to very serious systemic breaches. "This causes a great deal of concern. With such opposition to the reform, the commitment to investigate the breaches only increase," he stated.

- Who is interested and who is obstructing the publication of information about breaches in the forests? [LRT.lt inquired R. Karbauskis]

I do not know, I only know that the news of this first reached the Prime Minister and only then – minister K. Navickas. However such information should reach the minister first of all.

- If you and the Prime Minister have information of serious breaches in the forestry sector, why is the information not handed over to law enforcement?

It certainly will be. Why this was not done earlier, I do not know. The Prime Minister only received the information last Thursday. Who presented it, I cannot say. I saw it. Our Social Democrat coalition partners did as well. Our group was presented with it as well.

- Why is the forestry reform dragging on like this, requiring an extension of the Seimas session?

We are aiming for the reform to be enacted and the efforts to delay it mean that perhaps our commitment will fade. But I can assure you that we will go all the way and we will achieve our goal. If need be we will work with the forestry community until it understands the reform is crucial. If need be the Seimas session will be extended again.

The Forest Law, which would allow to initiate the "Farmer" forestry reform will be discussed and voted on by Seimas on July 4.

The ruling Lithuanian Farmers and Greens Union (LFGU) wants the Seimas to set up a parliamentary...