G. Kirkilas – discussions in the council will be heated 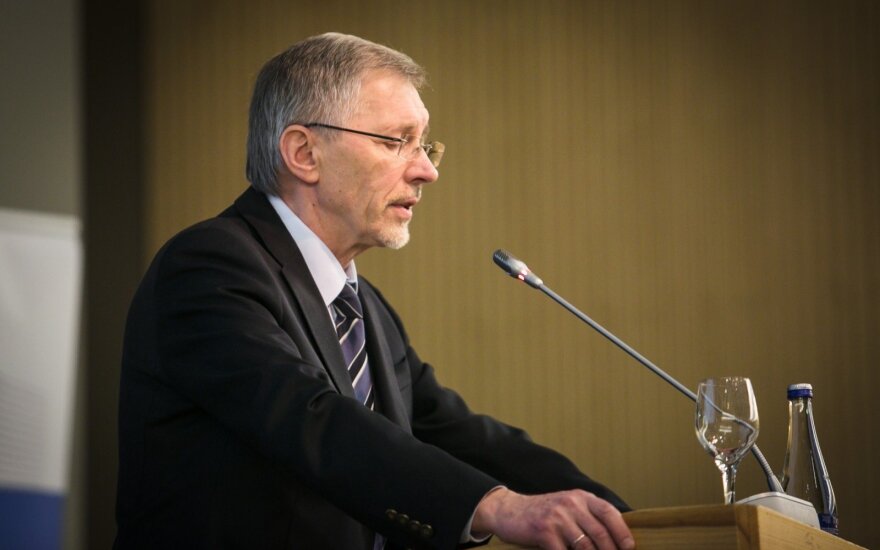 The situation in the Social Democrat Party and group in resolving the question of remaining in the coalition remains ambiguous. So far of the party's 60 branches, 42 have expressed their opinion. 31 branches support withdrawal, 5 wish to remain and 6 wish to renegotiate. Nevertheless, in the council itself, the strength of those intent on withdrawing is 80 of 237 council members As such concluding that the majority of the party supports withdrawal is somewhat premature. The whole situation was discussed with Social Democrat Party deputy chairman Gediminas Kirkilas and Delfi.lt chief editor Monika Garbačiauskaitė-Budrienė on the LRT talk show Dėmesio Centre.

G. Kirkilas remain positive regarding the ongoing situation, stating that it is excellent such a survey is being performed and that the party's younger generation is taking up such initiatives. He recalls how the party held a similar survey before regarding entering NATO and EU questions into its programme.

The deputy chairman denies that the position is already clear, stressing that they will wait for the full results to come in and furthermore that the survey will be a recommendation. The veteran politician emphasises the gravity of such a decision, while also jabbing at the current coalition partners in the Farmer and Greens, who have taken to the opposition for support in certain questions. Kirkilas thus points out that party members are left questioning if their party is still needed in the coalition if information on decisions is not shared or discussed. "There are many things. You either respect your coalition partners or you do not wish to work with them," he stated.

M. Garbačiauskaitė-Budrienė believes that the ongoing situation is a struggle between the old Social Democrat establishment and the party's new chairman Gintautas Paluckas who feels he has the party's backing. She notes that the Social Democrats are typically apt at avoiding such overt confrontations, but now have cornered themselves and it is unclear whether withdrawal from the coalition will prove beneficial, especially considering potential losses in terms of posts. G. Kirkilas downplays the possibility for losses in committee and cabinet posts, pointing out that many are based on the party's number of mandates in Seimas, rather than participation in the coalition itself.

When asked if perhaps the conflict is grounded in G. Paluckas focusing on long term prospects versus the party group's consideration of short term interests, G. Kirkilas emphasises that the group itself believes that the agenda backed by G. Paluckas could already be offered as things stand. Furthermore M. Garbačiauskaitė-Budrienė questions whether withdrawal from the coalition could actually be beneficial in the long term, given that the Seimas group does not give off the appearance of a leftist power and Paluckas, not being a member of Seimas, will struggle to ensure the application of the agenda he desires while he is outside.

Nevertheless, despite having been pushed down to number 41 in the party's electoral roll and not entering Seimas, Paluckas has found his own leverage to use, especially when the coalition agreement was very much not in the Social Democrats' favour. Both Garbačiauskaitė-Budrienė and Kirkilas concur that the party will likely emerge with benefits from the overall situation because the "Farmers" will likely be forced to coordinate more with the Social Democrats, no matter the outcome.

The Social Democrat party bloc that supports withdrawal from the coalition government, which is formed from the 31 branches which have voted for withdrawing, currently is represented by 80 of the party's 237 council members. Another 20 posts are held by the Seimas group, which is currently mostly in support of remaining, while the remaining nearly 130 have not clearly expressed their opinion. In regard to this, G. Kirkilas states that, "Discussions in the council will be heated. Usually our voting is open, but in some questions we hold secret ballots. It could be secret if someone asks for it."

G. Kirkilas claims that he is supportive of G. Paluckas and his initiative to refocus more on leftist values. While Paluckas has cited the memorandum between the Social Democrat and Farmer-Greens Seimas groups as a "slap to the face", Kirkilas believes that the memorandum is actually supportive of Paluckas' aims, while also granting the "Farmers" yet another opportunity to cooperate. He also emphasises that this is not a "swan song" among the more senior party members who are in the Seimas group and that such considerations, being concerned over re-election, are something for individual politicians to worry about, whereas he sees no reason to.

To this, M. Garbačiauskaitė-Budrienė points out that the senior party members may not need worry about reduced opportunities to participate in further elections because, as she notes, it does not appear that G. Paluckas would have a strong entourage gathered around him, while the veteran members in the Seimas group are experienced and influential. At the same time the group naturally prefers to be in the majority, rather than the opposition, considering the availability of government offices. In response to this G. Kirkilas stresses that the considerations are more empathetic, that the party must seek to accomplish its electoral programme and being in the majority is by far more effective for this.

The Delfi.lt chief editor is unsure whether overall withdrawal from the coalition could be a good step for the Social Democrats, but states with some certainty that at least for now it is not beneficial, given the amount of time left to the next elections. Meanwhile G. Kirkilas adds to this that in the end their coalition partners do not have a viable alternative other than a floating minority government. He questions why the "Farmers" are rushing to and fro between the various other groups, but not communicating in the coalition. "We could have come to terms, even on the question of the forestries, but we are met with some sort of arrogance and it continues," he states, adding that if Ramūnas Karbauskis wishes to partake in discussions, he should refer to the coalition council, which should be the primary recourse.

With the Homeland Union's leader Gabrielius Landsbergis having stated that his party is in no rush to join any coalition, G. Kirkilas sees little other alternative for the "Farmers", furthermore noting that even if a "Farmer"-TS-LKD coalition materialised, the current government's positions would be far weaker and the "Farmers" would "reveal themselves to not being the leftist or centre-left party they pretended to be during the elections."

It is difficult to make predictions of how the situation will develop over the coming month, with many having made numerous predictions and firing far off the mark, according to M. Garbačiauskaitė-Budrienė. She believes that the Social Democrats would most benefit from remaining in the coalition, which is apparently the most likely outcome, being a heavy and unpleasant partner which entrenches its positions and prevents the "Farmers" from relaxing. Nevertheless she notes this requires vigour, commitment and intent, which would equally be necessary if they departed to the opposition.

Lawmakers of the ruling Lithuanian Farmers and Greens Union ( LFGU ) and the Lithuanian Social...