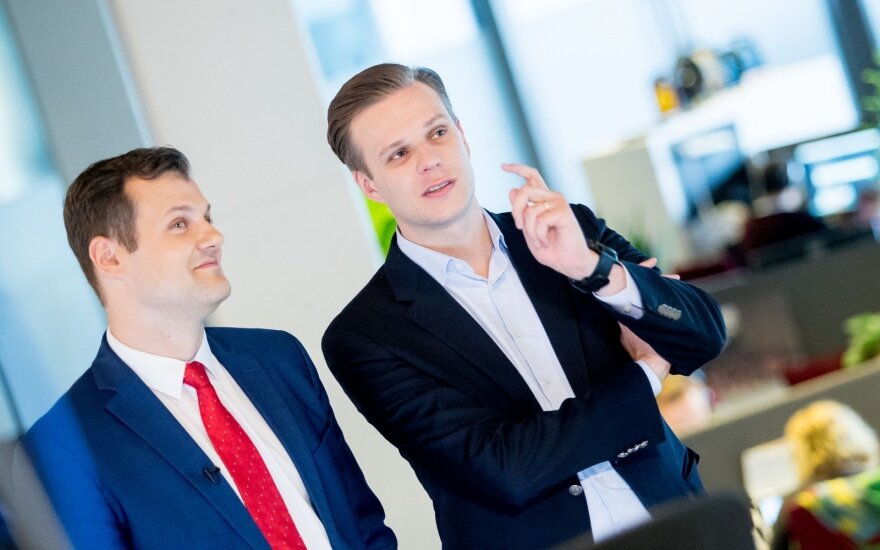 Two young political party leaders – the Conservatives' Gabrielius Landsbergis and LSDP's Gintautas Paluckas – two weeks ago ruined signing the traditional parliamentary political party agreement on foreign, security and defence policy for 2018-2020, which is important for national interests. What are the real factors behind such decision of Gabrielius and Gintautas' (2G) tandem?

Russia's war against Ukraine, cynical occupation of Crimea and East Ukrainian territories and continuing escalation of conflict by Moscow. That is a reality of these days. The reality, which raises threats to Lithuanian national interests and security. Under such a situation the united stance of Lithuanian politicians regarding security, defence and foreign policy becomes especially important.

Related articles
Algirdas Butkevičius specifies who will compete in the second round of the presidential elections
What happened to Skvernelis?

Considering the situation and the necessity to define Lithuanian strategic goals in foreign security and defence policy for the next two years, the Foreign Affairs and Defence Ministries have prepared a conceptual document, encompassing our principal position regarding Russia's threat for European security, further development of relations with NATO and EU, strengthening defence and security capacities, issues of energetics, double citizenship, relations with diaspora and economic diplomacy.

One of the most important issues – the aim of strengthening the implementation of commitments to NATO and other international organisations. Lithuania increased its defence expenditures up to 2 per cents for 2018, and the new party agreement would assure the further systematic increase in defence expenses.

The new agreement pays attention to the challenges, dangers and threats for the euro-Atlantic community, also to the aggressive actions of Russia and its satellites, which destroys the international security architecture, based on peaceful coexistence, as well as Russia's efforts to revise the history of XX century. The document stresses that Russia rudely breached the Charter of United Nations and other international documents, by annexing the part of Ukrainian territory – Crimea – in March 2014, further continuing the military escalation in eastern part of Ukraine and not fulfilling Minsk agreements, and therefore expresses support for Ukrainian territorial unity.

Furthermore, the party agreement foresees special attention to the unsafe development of nuclear energy power close to the Lithuanian national border, which also goes against international nuclear and radiation safety as well as environmental requirements. Together with the international community, we shall require that Russian and Belarusian international commitments in this area should be implemented fully, while their infrastructure projects, especially Astravyets nuclear power plant, should not raise a threat to Lithuanian national security, environment and health of population. Agreement seeks international support for Lithuanian position, so the electric energy, which is produced against international standards in Astravyets power plant, would not be imported to the EU or using the EU member states' infrastructure.

For anyone with even a cursory understanding of international politics, is clear that the signing of such an agreement and its consequent implementation would strengthen Lithuanian resillience against internal and external threats.

Then why among all the parliamentary political parties, the leaders of only two – the Conservatives and LSDP – would stand against such agreement?

LSDP's Paluckas position could be linked to the recent changes in LSDP foreign policy orientation and its primitive political rhetoric. He publicly declared that agreement could only be signed by the political parties and therefore not by the Seimas' Lithuanian Social Democratic Labour (LSDD) Faction. LSDD agreed to be a part of the agreement not as a participant, but as a supporter, aiming at showing that Lithuanian parliamentarians' position regarding the country's foreign and defence policy is united. However, such step by the LSDD has not changed Paluckas' position and he refused to sign agreement.

Beneath these Paluckas' blackmail and pretences lies the more important factors. Apparently, the LSDP leaders, who recently have been intensively losing the voters' trust, also face a lack of ideas and therefore they a solution in the coming presidential elections and their potential candidate Vytenis Andriukaitis. The latter, who has not yet confirmed his intentions to run for president again, will apparently will not refuse to do it. Vytenis has been probably the biggest enthusiast of improving relations with Russia in Lithuania. Therefore, LSDP participation in the agreement on foreign, security and defence policy would decrease LSDP and its candidate's freedom of manoeuvre in raising the issue of improving relations with Russia in public discourse.

In addition, apparently, LSDP policy regarding these issues is becoming very consistent. It is enough to remember Paluckas' current efforts to oppose the statute officers with teachers and doctors, publicly declared unwillingness to increase the defence expenditures. Eloquent is another one episode, when at the end of the last year, the large group of "renewed" LSDP with vice-chairman Justas Pankauskas visited Riga, for the purpose to learn some experience from Latvia's controversial "Harmony" party. This political force systematically speaks for improving relations with Russia and for years even had the cooperation agreement with Kremlin party "United Russia". What kind of experience could the LSDP leaders learn there? We could see from further LSDP actions.

Paluckas' position is not surprising, but Landsbergis' dangerous games are alarming. Together with Paluckas he voted against the state budget of 2018, which increased funding of national defence up to more than 2 per cents. However, the Conservatives are the biggest opposition faction in the Seimas, which always want to show attention to the issues of Lithuanian security and defence in their political agenda, public sphere or during electoral campaigns. However, suddenly Gabrielius makes such an unexpected turn. For the sake of truth, it should be noted that in 2014 the Conservatives demonstrated political maturity and state-minded point of view in a similar situation, when then they signed an analogous agreement. However, then their leader was not Landsbergis, but Andrius Kubilius, who has more experience and understanding about the threats for Lithuanian security.

Ironically, on the same day, when Gabrielius was supposed to sign the agreement on security and defence policy (which he did not do), his grandfather Vytautas Landsbergis declared: "we are as insecure as ever, because threats have changed". In his speech, the patriarch of the Conservatives especially pointed to the threats of hybrid war, Russian propaganda and Astravyets nuclear plant, next to Lithuanian border. Because of these changing challenges, the parliamentary parties want to renew the 2014 agreement. Nevertheless, apparently Gabrielius does not want to listen to the warnings of neither his grandfather nor security and defence experts.

So why then Gabrielius does not sign the agreement?

Apparently, because of the opposition leader's chair and his further political calculations. After the Social Democrats withdrew from the ruling coalition and somehow formed a parliamentary faction, the hope for Landsbergis arose to get the long desired chair of opposition leader which is an extra office in the Seimas' leadership.

The 2G flirt, which started after Gintautas had begun to aspire the LSDP leadership and received the comprehensive support of the Conservatives' leader, has turned into common activities in the Seimas. Gabrielius with fatherly care watches over the project "Paluckas", while the Social Democrats, who have become the younger partners of the Conservatives in the opposition respond with the obedient voting in the Seimas. No wonder, recently LSDP faction leader Juozas Olekas declared to take initiative to talk with opposition factions regarding the election of opposition leader.

Apparently, Gabrielius' political investment in Gintautas will pay back more than enough and he will get the chair of the opposition leader. It does not matter that the price of such caprice is very high – the opportunity of strengthening Lithuanian foreign, security and defence policy has been sacrificed.

The letter: Brief overview of the current challenges for Social Democracy in Lithuania