From Kremlin propagandist to Lithuanian spy: Russian suspected of being double agent 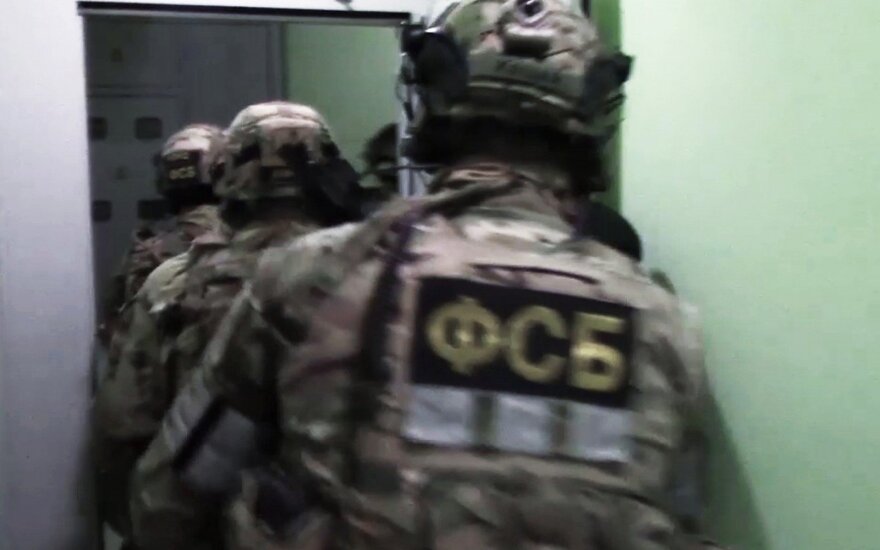 Delfi announced on Thursday evening that a Kaliningrad resident named Antonina Zimina, accused of treason and currently held at the Lefortovo Prison in Moscow, was arrested.

"She was arrested in Kaliningrad by five Federal Security Service officers, later she was taken to Moscow by plane," A. Yonov stated. According to him, the woman is experiencing and depression. It is noted that A. Zimina is being called an "independent expert", who "took interest in the Baltic States' policies regarding Russia and the similarities of the Latvian political elite."

Nevertheless, in Russian media, primarily in the news portal Dozhd, more detailed information on A. Zimina is presented. It turns out that she was not just imply interested in Lithuania, Latvia and Estonia.

Up to 2016, she was the director of the Baltic State Culture Dialogue Centre and is still a member of the Gorchakov Fund Friends Club. The fund's website specifies that her professional interests are the identity of the Latvian elite and Baltic States policies in relations with Russia.

The aforementioned fund was founded in 2010 by the order of the Russian presidential administration. The activities of this fund have drawn the attention of Baltic intelligence agencies a number of times before because this fund has been especially active in Lithuania, Latvia and Estonia, organising various seminars and conferences for teachers and Russian natives, popularised free studies in Russia.

Not only the Lithuanian services identify the Gorchakov Fund as a Russian soft power tool, which "Seeks to increase Russian influence, improve its image abroad, create narratives that match Kremlin interests and effectively accomplish Russian interests."

From the start of 2015, Ukraine officially banned the fund's activities, the country's intelligence agencies accuse the fund's staff of performing anti-governmental propaganda campaigning in the country.

The Gorchakov Fund's links to Russian special services were also discussed in Latvia, for example, the organisation was mentioned in the country's counter-intelligence report on "youth recruitment." Latvia has declared two famous Russian propagandists Modest Kolerov and Igor Pavlovsky persona non grata, they have also been blacklisted in the Schengen area after attempting to enter the country in 2012 by invitation of the Gorchakov Fund.

The Estonians decided to not have dealings with the Gorchakov Fund either, Estonia barred entry to five of its employees headed to a conference in 2013. However, the fund's representatives did not forget Lithuania and, fr example last October organised a conference in St. Petersburg titled 1917-1920 wars and revolutions: birth of Finnish, Estonian, Latvian and Lithuanian statehood."

The fund's ambitions to develop in Lithuania failed in 2015 when it organised the event "National Minority Identities in the Baltic States" in Vilnius, where representatives from the Russian embassy participated. After the event, it was planned to establish a fund office in Lithuania. The event was closely followed by the VSD and the news media.

The organisers, were uninterested in the latter's attention – officially the Vilnius Russian Speaking School Association had earlier caught the attention of the VSD. In the aforementioned 2015 national security threat report, the association is mentioned, as well as its Vilnius branch and its head Ela Kanaitė, whose activities have been officially rewarded by the Russian president.

The event organisers also expressed discontent over police officers stopping one of the vehicles with the event's guests and escorting it to the police station. Among the apprehended was A. Zimina, who later had to depart Lithuania and the fund's plans to establish an office failed.

Nevertheless, A. Zimina did not forget Lithuania. She and her husband Konstantin Zimin continued to organise various conferences and exhibitions through the Baltic States Culture Dialogue Centre in Kaliningrad. She also received her education in the city: in 2012, A. Zimina finished her aspiranture studies at the Immanuel Kant University and worked as a junior science staff in the university until 2013.

"I remember my aspiranture studies. I was contacted regarding interning in the Kaliningrad city Duma. Unfortunately, I could not help her then, but she left me the impression of a curious and interesting person. I would have never thought she could harm the state in any way," Kaliningrad Oblast public palace member and former regional parliament politician Solomon Ginsburg says.

The official accusations toward her have not been announced, nor what exactly she is suspected of. However, unofficial information is particularly intriguing.

According to Dozhd, after the conference in 2015 she was not just asked to leave the country, but deported from Lithuania. By the way, similar responses were made regarding another Kremlin propagandist – Galina Sapozhnikova, who was forced to leave Lithuania in 2015 and was officially barred from returning.

Officially it has not been confirmed whether A. Zimina has also been declared persona non grata, however already early this year, according to Dozhd, she admitted herself that she was barred from returning to Lithuania. This was apparently confirmed to Dozhd by two anonymous sources.

"I know why the Lithuanians barred her from returning, they view her as a Russian agent and so on, they are allergic to everything Russian there," one of Dozhd's commentators stated.

Another commentator, who claims to be a friend of A. Zimina, recounted how she visited Lithuania not just for work, but also because apparently she has relatives there. Apparently, the woman found out that she is barred from entering Lithuania only a year ago when she was barred entry at border control in the airport. Meanwhile in early 2018, she supposedly stated that Lithuanian special services offered her to cooperate in return for removing the bar on entry.

Russian media guesses that it is for this reason that A. Zimina was arrested. So far it has not been confirmed that A. Zimina agreed to cooperate with the VSD and if she did, what information she handed to the Lithuanians. However solely the FSB decision so silently arrest the former Kremlin propagandist and take her to the infamous Lefortovo jail in Moscow reveals that she truly is facing serious charges and perhaps even proof of her spying has been gathered.

According to A. Yonov, during his visit A. Zimina "appeared broken," constantly cried and smoked a lot. According to him, A. Zimina has been charged based on the country's penal code article 275 (treason) and faces up to 20 years incarceration.

"The VSD does not comment on media information, however we assure that we monitor all threats pertinent to national security and always take preventative measures," VSD press representative Aurelija Katkuvienė commented laconically.

The VSD neither denies, nor confirms, what it knows of A. Zimina's expulsion from Lithuania and refrained from comments on the potential recruitment of the Russian citizen.

Response to US actions?

Deputy head of the Gorchakov Fund, Roman Grishenin stood by his employee in a conversation with Dozhd and declared that her arrest was unexpected news.

"This is truly unexpected to us. We hope that her arrest is some sort of misunderstanding. We are certain that law enforcement institutions will perform a detailed and unbiased investigation," he added.

The Kaliningrad Oblast public palace member and former regional parliament politician Solomon Ginsburg is also surprised over A. Zimina's arrest, however he presented his own conspiracy theory: supposedly this is a symmetrical response to the US arrest of Russian citizen Maria Butina.

"You must understand that after high ranking meetings, there is an exchange of blows. I believe that this is high ranking diplomacy and people simply become hostages on both sides," the politician states. Another friend of the suspect" contacted by Dozhd also assured that she could have been "farmed by Western spies." According to him, at the start of the year she told him that she received a call from Lithuanian special services, calling her Russian number. The official promised to revoke her bar on entry to the country, if she agrees to cooperate, but she refused.

"Based on her statements, her attitude and values, this is certainly not the sort of person, who could betray their country, their Russia," he acquaintance and Baltic Youth Association Juvenis head in Klaipėda Aleksej Greičius said.

The governments of Estonia, Latvia and Lithuania face an increasingly large espionage threat from...