Eglė Samoškaitė, DELFI
aA
Prime Minister Saulius Skvernelis was outraged with the Farmer and Greens Union’s lack of discipline and expressed his dissatisfaction during the Seimas group’s meeting at noon today. 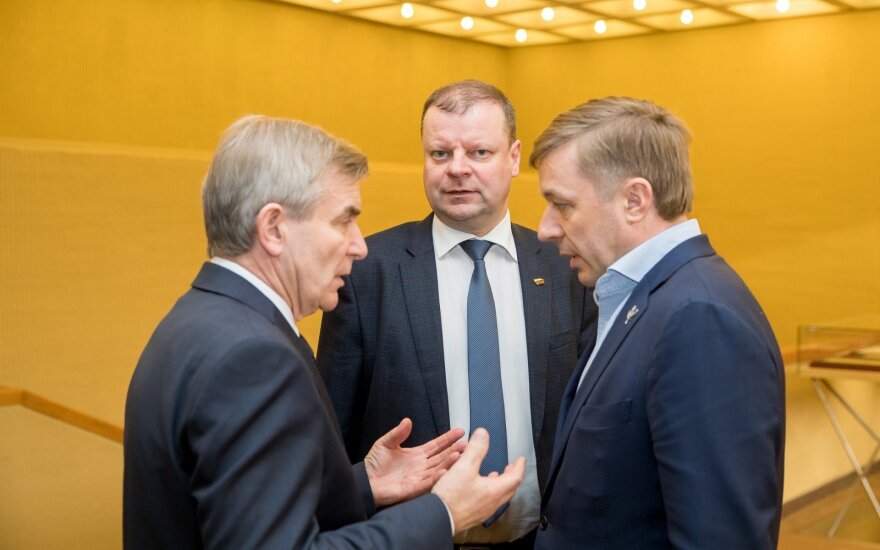 The Prime Minister felt that the “Farmers” had relaxed regarding the forestry reform presented to Seimas on Thursday by Minister of Environment Kęstutis Navickas.

The procedure of presenting the question was interrupted by a recess requested by Order and Justice representative Remigijus Žemaitaitis, which could have been avoided if the “Farmers” had voted against and if their coalition partners, the Social Democrats supported the “Farmers” in the matter.

However of the 19 Social Democrat Seimas group members, 11 voted in favour of recess, with 2 abstaining and 2 voting against.

Related articles
Test passed by Kubilius and Butkevičius – will Karbauskis and Skvernelis succeed?
Survey: new ratings are unfavourable for not only Karbauskis

Due to this the Farmer Greens began discussing what to do regarding the Social Democrats, who do not support the forestry reform, having already stated they will not support the strict reform proposed by K. Navickas to merge the 42 forestries into a single unit.

During a lunchtime Seimas group meeting, according to Delfi information, not only S. Skvernelis’ outrage resounded, but also calls by unspecified individual(s) to break off the coalition with the Social Democrats.

Due to this a vote-survey was even held, but only around 17 group members supported this, when the Seimas group holds a total of 56 members, excluding Seimas Speaker Viktoras Pranckietis.
Others recommended to cool down and only discuss dissolving the coalition when and if an agreement is made with the Conservatives. That said, there were those who thought that the Homeland Union – Lithuanian Christian Democrats would eclipse the Farmer Greens, even as the junior coalition partner.

2. A minority cabinet, if it turns out that a coalition with the Social Democrats is lifeless and a new one cannot be formed.

3. Forming a coalition with the Homeland Union – Lithuanian Christian Democrats.

According to a member of the Farmer and Greens Seimas group, who wanted their name withheld, it has so far been decided to discuss with the Social Democrats. If this fails, then different decisions may be made.

“It is rather serious,” the politician told Delfi.

The Farmer and Greens Union group prefect and Chairman Ramūnas Karbauskis was particularly taciturn after the group meeting and quickly left for the Seimas conference hall. When asked what the group discussed about, Karbauskis only responded “We discussed the afternoon agenda.”
One member of Seimas has told Delfi that the “Farmers” even began talking about the break-up of the coalition in the conference hall and shouted out so loud that R. Žemaitaitis requested to cease the ruckus. Meanwhile of 56 group members, excluding the Speaker, only 43 voted, meaning that 13 members of Seimas either did not participate in the session or intentionally did not vote.

Lithuania's Prime Minister Saulius Skvernelis has restated plans of raising pensions , if the...