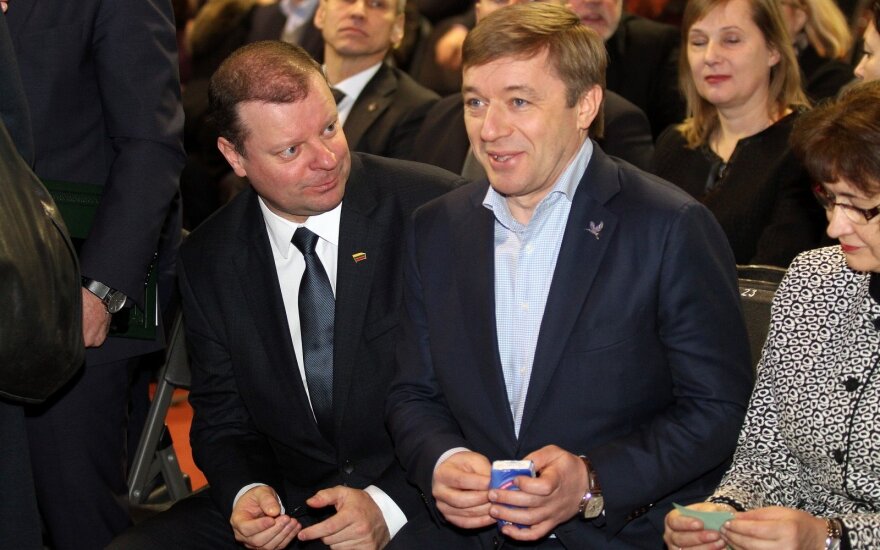 Having earned mass support from voters in last autumn’s Seimas elections, the “Farmers” are rapidly losing public support – surveys show that around half of their supporters have turned away. Political scientists warn that this is no longer just the traditional decline in enthusiasm that follows after elections, but a real signal to Ramūnas Karbauskis’ Lithuanian Farmer and Greens Union (LVŽS). But should the political powers vying for “Farmer” supporters’ sympathies celebrate this?

On Saturday the Lietuvos Rytas newspaper announced that based on a June 2-10 survey by Vilmorus, the “Farmers” have begun rapidly declining in the ratings charts after their vast popularity at the start of the year.

Based on Vilmorus survey data the LVŽS popularity reached 25% on January 2017 and declined around 10% over half a year. The June results show the “Farmers” with only 15.7% popularity. Meanwhile last December various surveys showed the “Farmers” with up to an entire 30% support.

The survey data shows that the opposition Homeland Union – Lithuanian Christian Democrats are currently in close pursuit at 15.5% popularity.

Why is the “Farmer” popularity declining this rapidly, what does it mean and who could benefit the most from the situation?

During an interview with Alfa.lt Vytautas Magnus University (VDU) professor Lauras Bielinis stressed that the rapid decline of “Farmer” popularity should not be just linked to a natural decline in voter sympathies that can usually be observed after elections. He notes that such rapid decline is unnatural and instead is a display of voters’ views on the “Farmer’s” mistakes – failure to explain various ongoing reforms or the reforms’ adventurous and poorly thought out appearance.

The VDU professor assures that one of the key “Farmer” mistakes has been various failed reforms, these including tax reform, Labour Code changes, which have been poorly received by the public. Furthermore Bielinis explains that the LVŽS’ fight against alcoholism is not actually directed toward alcoholism prevention, but rather issues of sales and consumption, whereas alcoholism is more of a social issue. Similarly the professor notes that to this day it is unclear what the majority intends with its higher education reform.

The curse of a large advantage

Vilnius University Institute of International Relations and Political Science (VU TSPMI) docent Mažvydas Jastramskis echoes Bielinis’ sentiments and notes that the “Farmer’s” ratings decline has brought them back to their positions prior to the Seimas elections. Jastramskis stresses that based on such trends the party’s ratings could decline all the way to zero, even if it is unlikely.

The TSPMI docent points out that the “Farmers” earned an exceptionally dominant position in Seimas with their 56 Seimas mandates, while also carrying massive expectations. With the “Farmer’s” dominant position, including the appointment of most ministers, they are held much more accountable and the current government’s failures are mostly linked to the “Farmers”, rather than the coalition or the Social Democrats.

Shelter for the disappointed

According to M. Jastramskis the decline in “Farmer” popularity does not mean that voters disappointed in R. Karbauskis’ party will turn to other parties instead. The expert highlights that while the “Farmers” declined greatly, their rivals have not advanced far, even their currently greatest rivals, the Conservatives are only at a marginal 15% approval.

“The equalisation [of “Farmer” and Conservative ratings] is primarily there because the “Farmers” declined and not because the Conservatives had strong growth. There are increasingly many people who are simply undecided and it is particularly early to think who they could vote for,” the TSPMI docent explained, adding that much of the bled “Farmer” electorate may simply turn to a new populist power.

L. Bielinis also adds that the “Farmer” popularity decline may benefit more than just the opposition. The Social Democrats may reap benefits from this as well, particularly if they are more decisive in their criticism of their partners; cooperation with those unable to realise they are mistaken can only be harmful.

In the end the VDU professor draws the same conclusion as his colleague from TSPMI in that the LVŽS voters which brought them into power are likely simply migrating between various populist offerings and choose their preferred variant, with populist parties consistently earning results, such as Labour or Order and Justice.

“They [voters who turned from the “Farmers”] are awaiting a new messiah, a new owner and he who declares themselves one or he who fakes being one, will go very far,” L. Bielinis concluded.