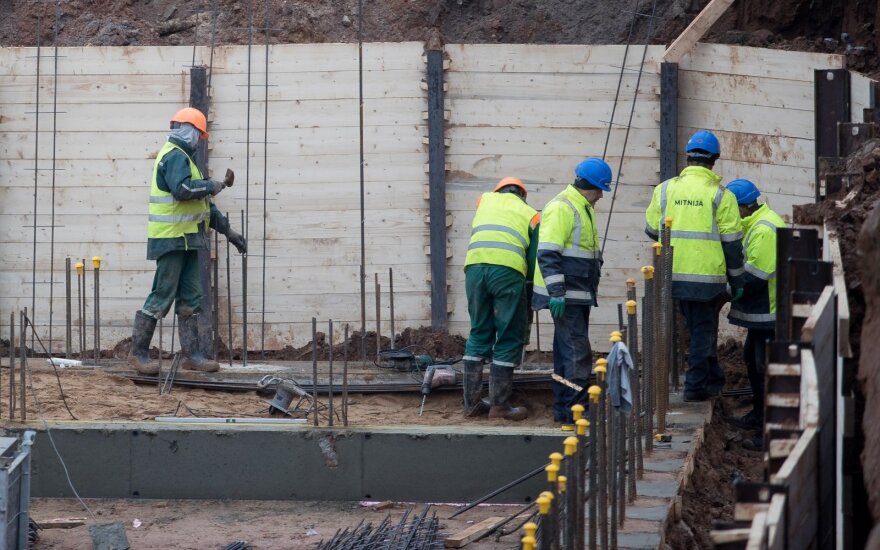 Hundreds of euro withdrawn from wages for supposed or existing breaches of conduct and work materials, uncompensated overtime – these are conditions under which immigrants from outside the EU must work in Lithuania and which Lithuanians themselves are fleeing. Lithuanian Social Research Centre research staff, dr. Karolis Žibas told LRT Radio, lrt.lt writes.

Employees from Ukraine told LRT Radio that employers would subtract a deposit from their wages for potential penalties, however while the staff did not face any penalties, they were unable to regain the deposit from their employer. The Ukrainians also complained about charges in the hundreds of euro based on unjustified claims on what every employer must supply – work wear, equipment and such.

"My wages depend on my employer's mood. If it's good, then the wage is good. But if you make a wrong step somewhere, do whatever you want – your wage will be lower. After the first work term, the employer subtracted 500 euro from the wage and said this is a deposit. I asked why and he explained that [it is intended for security] if a fine is applied or something such and this sum will cover it.

I agreed to such conditions. Sometime later, I requested the funds because I no longer had anything to eat for. He answered that the money is unavailable, safely stored away. Finally, he said that the money would not be returned to me and I cannot do anything to him. [...] I appealed to the courts, but lost the trial," a Ukrainian commented to LRT Radio, emphasising that the employer did so toward everyone.

He counts that he should have received 10 thousand euro for al his work, but earned only 4 thousand.

Chairman of the Lithuanian Confederation of Trade Unions Audrius Cuzanauskas states that there are hundreds of court cases in Lithuania where migrants contest unfair employers, but they are often lost and others fail to even reach the courts due to a lack of evidence.

"However these are the cases of those, who manage to call [on the courts, obtain aid, meanwhile a vast number of working immigrants simply leave the country and then seek means through their acquaintances, how to regain their wages.

However, our Migration Service, State Labour Inspectorate (VDI), Sodra and country in general are overall unprepared to accept workers from third countries [non-EU], to care for them. Businesses exploit this, various charges for existing or supposed breaches, for work equipment are made illegally. We have been talking about it for a decade, but no one hears," A. Cuzanauskas said.

Deputy Chief State Labour Inspector Dalius Čeponas states that the VDI has heard stories about deposits before beginning to pay a lower than promised wage.

"These circumstances, agreements are illegal. A deposit is a non-contractual element of labour relations. Work wear and other equipment needed for work must be supplied free of charge by the employers, charges for work equipment are illegal.

Lack of knowledge of Lithuanian law, inexperience often hampers citizens of third countries, creates conditions for such unfair behaviour from employers," he said.

However, D. Čeponas notes that while it is difficult to prove it because officially the deposits do not appear anywhere, are not specified in documents, certain employers apply it to more than just Ukrainians and Belarussians.

K. Žibas notes that the unfairness of employers, which work immigrants face, is one of the reasons, due to which Lithuanians themselves emigrate.

"This is also a reason for Lithuanian emigration. It must be understood that workplaces that Lithuanians are fleeing for the same reasons are occupied by more vulnerable individuals from other countries. From 1991, we were used to talk about the exploitation of Lithuanians abroad, human trafficking, the victims of modern slavery. Today we are waking up and beginning to talk how immigrants and not only them are exploited in Lithuania.

The exact same schemes are used in Lithuania as were applied to Lithuanians. It is a massive problem that we do not recognise the red line where exploitation shifts to human trafficking and modern slavery. And unfortunately today we have completely toothless institutions. We cannot even ensure the adherence to the new Labour Code, same as we failed to ensure the adherence to the old one. We cannot even protect our own workers, then what is there to say of work immigrants?" K. Žibas spoke.

D. Čeponas notes that wages are agreed upon in the work contract, thus the contracts must always be read through, reviewed, what conditions you are agreeing with and signing, what wage you will be able to demand, otherwise a lack of evidence appears, what wages were agreed on.

"There is an unwritten rule that the costs of a day are not agreed on officially: a specific wage is agreed on, while the wage for each day would seem to be agreed upon verbally and it is difficult to prove agreement so that the employee could obtain his wages via court," he mused.

The Lithuanian Cabinet approved on Wednesday principles for a migration system reform that envisages...

The number of foreigners coming to Lithuania to work has more than doubled this year, new figures...

Amid a rapid increase in immigration from Ukraine , the Lithuanian government decided on Wednesday to...