Media Briefing
aA
Last week, Prime Minister Saulius Skvernelis announced his presidential bid. This decision has finalised matters on the political stage. Gitanas Nausėda, S. Skvernelis and Ingrida Šimonytė gather 40% of the vote according to surveys. Another 40% of potential voters are undecided and the remaining 20% is shared by the other candidates. Thus, the number of candidates is growing and the intrigue is rising. How the presidential election campaign will develop and who has the highest chances was discussed by experts on Monday’s LRT Forumas, lrt.lt writes. 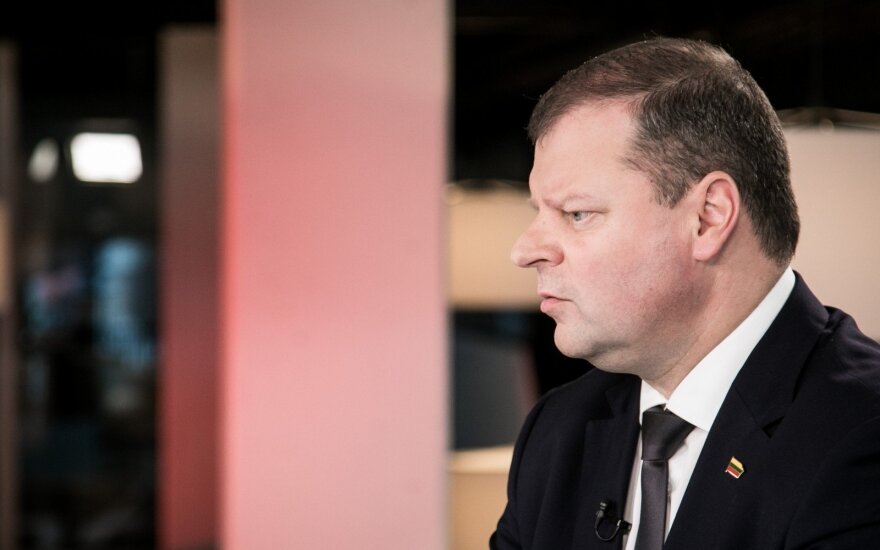 According to the head of public opinion and market research centre Vilmorus, sociologist Vladas Gaidys, S. Skvernelis' announcement about his presidential bid will decide on his ratings growth. He noted that the presidential candidate ratings were formed for the first time in 2017. Back then, survey takers were given an open question, being asked to enter anyone they thought to be a suitable candidate.

"S. Skvernelis was first back then. Further on, when people started engaging with it, those who did not say if they will be candidates lost votes, those who did – the opposite. I. Šimonytė immediately received many just because she said "I am going,"" V. Gaidys spoke. According to him, upon announcing his bid, S. Skvernelis' ratings could grow almost five percent. That said, he does not believe that with the growth of the prime minister's ratings as a candidate, the support of others could fall. According to the sociologist, there are many undecided voters, thus S. Skvernelis' ratings could rise by drawing from them.

Nevertheless, V. Gaidys also sees a problem for S. Skvernelis – during the last month of 2018, his ratings decreased greatly. Such a loss in support could have been due to a teachers' strike, which lasted over a month. In December, for the first time in S. Skvernelis' career, there were more survey takers rating the prime minister negatively than positively. The head of Vilmorus stated that a president cannot have a negative rating, they must span a far larger electorate.

"Time is passing fast now. What would happen over half a year before now happens over a week. Many events. It is much harder to elevate ratings to the top, but they fall very rapidly – any misplaced word, any misstep and your ratings can fall. Not just for S. Skvernelis – for anyone," V. Gaidys commented.

Important not to forget the undecided

Public relations expert Linas Kontrimas spoke that the candidates at the peak of the ratings, particularly G. Nausėda and I. Šimonytė already have a clear number of people, if fluctuating by a couple percent, who will definitely vote for them.

"What happens now? There will be an emotional nurturing of the team, which will very clearly begin attacking, being angry and disliking certain candidates. And S. Skvernelis, I believe, will be one of those, who will face attacks from various directions," L. Kontrimas spoke.

According to him, for example philosopher Arvydas Juozaitis, who is aiming at a broad electorate, has so far not faced any attacks because everyone leaves him in the margins. L. Kontrimas emphasises that the unexpected could happen. He spoke on how if any one of the leaders activate and mobilise the remaining undecided 40%, they could decide the result.

Analyst Rimvydas Valatka noted that one cannot say that S. Skvernelis is being attacked. According to him, if a politician makes a good move, in the worst case it is disregarded, in the best case – they are praised. However, to say that the prime minister is being attacked, the analyst notes, is incorrect because criticism arises from his questionable actions.

"If S. Skvernelis, for example, tells resident doctors to go to London or if he says that the organisers of the teachers' strike are working for the Russian special services or on commission from them, then in such a case, is it an attack? I do not believe that this will be an attack. It will be a legal, normal criticism under democratic conditions, showing that the prime minister should not act this way.

I believe that there should be more "cop" jokes because after all it was not in Rusnė that he decided to run for president. It was already clear that he would participate [...] I believe that he started the campaigning long ago," R. Valatka said.

Analyst Vladimiras Laučius says that he believes that S. Skvernelis will continue to act as he has even after his declaration of candidacy because it benefits him. According to V. Laučius, the prime minister's radical statements, which have emerged at the end of last year and caused an uproar also had a goal, which is likely linked to the elections. According to the analyst, candidates struggle to reach audiences if they talk softly, carefully and say nothing that would be broadcast on the news for a few days or a week.

"If you say that the Kremlin and the Conservatives are plotting against you, then of course the news media will latch on to this news and whether they want it or not, the hard to reach voters will hear of it because the news media will do the work that the future candidate and his team do not do. This is purely electoral manoeuvring, which may have been harmful to some extent," V. Laučius commented.

At the same time, L. Kontrimas stated that already prior to the 2016 Seimas elections it was clear that after becoming prime minister, Saulius Skvernelis will aim for the office of president. Thus, the public relations expert believes, it would be incorrect to feign that such a decision was news.

"It was clear it would be him. The "Farmer-Greens" did not nurture any other candidate. And during a few years, you could freely invest into some safe, reliable candidate, who would not be disagreeable to anyone. There were musing that it could perhaps be Viktoras Pranckietis, perhaps that Bronis Ropė would try again, but this was just an aside," L. Kontrimas said.

Did not expect candidacy

Vilnius University Institute of International Relations and Political Science (VU TSPMI) political scientist Kęstutis Girnius stated he expected S. Skvernelis to act rationally and after all, as K. Girnius puts it, excesses would not seek the office of president.

"I certainly do not believe that all these steps are well thought out. For example, regarding the Conservatives, he completely spoke nonsense, he is a rash individual and I do not believe everything is scripted. He erupted in anger. As for the nonsense about the Conservatives being agents of Moscow, he half-apologised. And also apologised over some other matters," K. Girnius said.

According to the political scientist, if such behaviour by the prime minister was part of a well thought out and carefully developed election tactic, he would not apologise. K. Girnius stated he believes that by running for president, S. Skvernelis is taking a major risk – if he were to lose the elections or fail to enter the second round, it would be particularly difficult for him to continue as prime minister: "I do not believe that [the "Farmers"] will throw him out, but his prestige will have taken a blow, his influence in the party declined. Most likely he will not lose his post even if he loses, but his influence will be lessened, the cabinet's influence will have fallen his prestige will have fallen and he will be an indirect "loser.""

K. Girnius said that a simpler path would have been for S. Skvernelis to not run for president and say that he is the prime minister, committed to the cabinet and has to do much work, having done much already.

General Jonas Žemaitis Lithuanian War Academy pro-rector Jūratė Novagrockienė also said she does not believe that S. Skvernelis planned his presidential bid ahead of time. According to her, the main reason that pushed the prime minister to make this step developed over several events: the story K. Girnius mentioned regarding the Conservatives, the teachers' strike and the firing of the three ministers.

"In other terms, the facts, which show that he is not managing to contain the situation and in fact is not resolving through overly pointed talk. Second, he declared that he will be an anti-establishment candidate. This is a typical move of R. Paksas because R. Paksas once said that he will be an anti-elite candidate. We must keep in mind that many of his steps and declarations were not well thought out and he will need significant work. I agree that he is significantly risking by running for the office," J. Novagrockienė commented.

Vytautas Magnus University (VDU) political scientist Lauras Bielinis stated that when S. Skvernelis declared his candidacy in Rusnė, the party's decision was not clear. The lrt.lt news portal reminds that the "Farmers" will confirm their presidential candidate on Saturday's congress. So far, the only known candidate nominated by the party's branches is S. Skvernelis.

"He has many problems, both in resolving questions on the cabinet level, as well as various questions within the party. He needs support from the party, without it, things will be incredibly difficult. By making his declaration, he sent a signal of "Don't forget me, I'm here. Those, who supported me, continue to do so." This is also a sort of game. Was it calculated? I do not think it was calculated fully," L. Bielinis spoke.

J. Novagrockienė said that the candidates are rather varied. For example, in regard to A. Juozaitis, she stated that his voters are rather anti-globalist, rather radical and intellectual. According to the War Academy pro-rector, A. Juozaitis has fairly sizeable support among intellectuals, which is expressed on social media and elsewhere.

"A. Juozaitis knows how to speak well. He talks about important, fundamental matters, but there is still an aspect of radicalism. He has a group of voters, but I believe only a small one," J. Novagrockienė said. K. Girnius noted that he believes that A. Juozaitis is the first serious candidate of a nationalist inclination, however he noted that he cannot imagine this candidate entering the second round.

A journalist investigation has uncovered facts that Prime Minister Saulius Skvernelis and Minister...