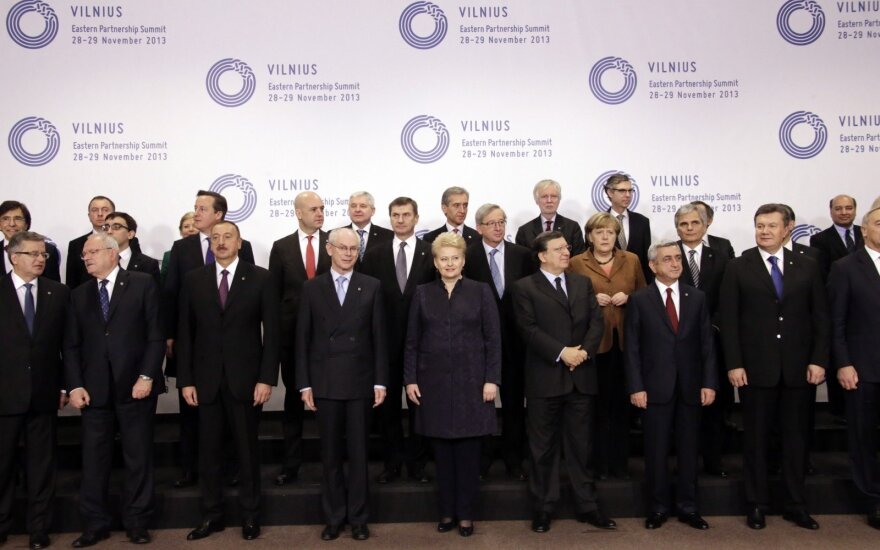 EU Eastern Partnership Programme 3rd summit
© LRPK / Džoja Gunda Barysaitė
The fifth European Union Eastern Partnership Summit will be held on Friday. While in recent years there have been breakthroughs in implementing this programme, no particular decisions or declarations are expected in Brussels this time because Europe is consumed with its own concerns, Lietuvos Žinios writes.
The EU Eastern Partnership Programme was started in 2009 with the aim to strengthen the political association and economic integration of six Eastern European and South Caucasus partner states – Armenia, Azerbaijan, Belarus, Georgia, Moldova and Ukraine. However not all the partnership states are integrating with Europe equally. Georgia, Moldova and Ukraine seek closer ties and have signed association agreements with the EU. Belarus and Armenia remain closer to Russia and also belong to the Eurasian Economic Union. Azerbaijan has not chosen a clear single direction. The leaders of EU and partner states gather every two years to evaluate achievements and outline the prospects for further work.
The programme has a future
Minister of Foreign Affairs Linas Linkevičius stated that just the fact that an Eastern Partnership summit will be held is already significant. “There certainly are many difficulties. There is war in Ukraine. Five of the six Eastern Partnership states have frozen or active conflicts. Thus it is very important that the meetings happen as agreed on, every two years,” he said.
L. Linkevičius believes that this meeting will mark achieved results. Ukraine, Moldova and Georgia signed association and free trade agreements with the EU, they have also entered visa-free regimes. The summit should also feature a repetition of the union’s position over the European choice of the associated partners, preparation to support them in implementing reform. There should also be a clearer highlight of the trio of countries which seek closer ties with the EU.
Meanwhile the relation of Belarus, Armenia and Azerbaijan with the EU is different. For example this year negotiations concluded over changes to the EU-Armenian partnership and cooperation agreement. According to L. Linkevičius, negotiations over a similar document were also started with Azerbaijan. “There are no such ambitions in Belarus to have some sort of special agreement, but we created momentum in discussions on eased visa regime during our European Council chairmanship because they had not been ongoing up to then. At the same time I wish to stress that we have one very serious complaint regarding Astravyets Nuclear Power Plant and hope that not only we, but also others will also clearly express it to the Belarussians. I have no doubt that the documents will contain requirements for third states to adhere to standards,” the minister explained.
L. Linkevičius is optimistic over the Eastern Partnership Programme. According to him, as long as there are states that desire to cooperate with the EU in various aspects, the Baltic States will remain unwavering over it and the programme has a future.
Visible prospects
Seimas Vice Speaker, head of the European Affairs Committee Gediminas Kirkilas expressed hope that during this meeting the plan to aid Ukraine initiated by Lithuanian politicians (dubbed the Marshall Plan for Ukraine), which was agreed to by the European Parliament will “one way or another” be agreed to. “At this time the wording is being coordinated, we hope that the question will be presented during this meeting,” he told Lietuvos Žinios. According to the politician, during the eight years of Eastern Partnership, much has been achieved – association agreements were signed, free trade is ongoing, visa free regimes established.
“There is only a lack of progress over EU expansion. But this is something the EU itself has not made up its mind about. I believe that nothing will change up to the next European Parliament elections,” G. Kirkilas said. He had no doubt that the programme has good prospects. “The countries participating in it are important to us in all aspects. God forbid if the EU would forget them, they would then undoubtedly return to the other zone of influence. Currently they, particularly Ukraine, Georgia and Moldova are engaged with EU integration, though of course there is no clear prospect for it yet. However if the countries continue with reforms, I believe it will appear,” the MP said. In G. Kirkilas’ belief, Lithuania is one of the most active participants of the programme and has specific ideas. “What could be more specific than the Marshal Plan? And this is not just financial support for Ukraine, it is primarily associating it with reforms. If such a plan is agreed on, I believe Ukraine would definitely continue reforms in all areas,” he stated.
Historical opportunity for expansion
Member of the Seimas Foreign Affairs Committee Žygimantas Pavilionis said that he expects little from this Eastern Partnership summit. Primarily this is due to the difficult political situation in Germany, which is struggling to form a new cabinet. “Realistically it will be a confirmation of current policy because it is proceeding under politically fairly difficult circumstances, when it is unclear whether Chancellor Angela Merkel’s cabinet will be formed once more. It was essentially the chief figure in uniting the EU in these questions, would always support us,” the MP said.
According to Ž. Pavilionis, eventually the west will return to the expansion of the EU and NATO toward the East. However this requires strong political allies in Germany and other European countries. Nevertheless this Eastern Partnership Summit will identify a number of smaller goals which, the politician believes are more on the operational level. “A long term strategic vision has not been formulated. Speaking specifically there is no clear prospect for EU membership for Ukraine, Moldova and Georgia. So far it will not be granted in Brussels. I hope that the countries which have association agreements will be highlighted as the most developed, closest to Europe group,” Ž. Pavilionis said.

Lithuania's President Dalia Grybauskaitė is Thursday leaving for Brussels to attend the European...

A historical opportunity to change fatigue with Eastern Partnership with ambition

"The summit in Brussels should be forward-looking, injecting new dynamism providing a clear political...

Belarus' opposition activists are skeptical about Brussels' decision to invite the country's...