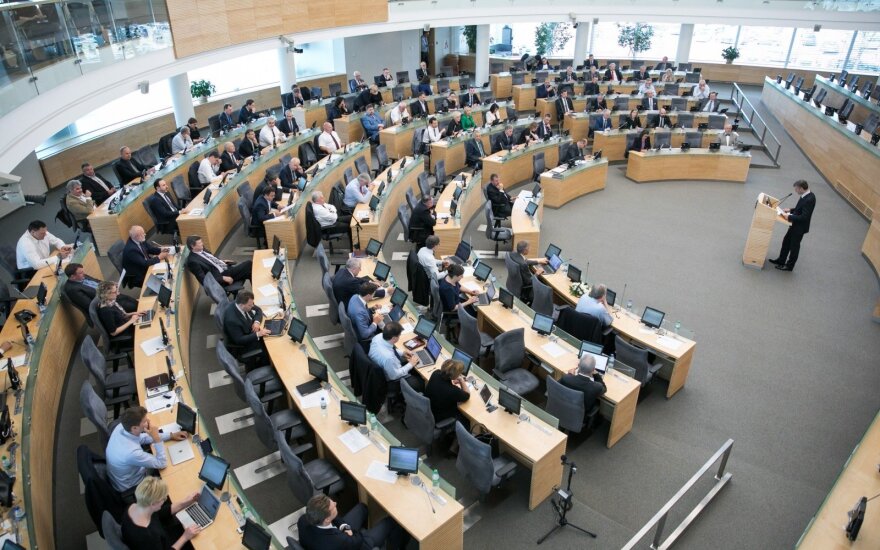 Having overcome the somewhat extended Seimas spring session, members of Seimas evaluate the work accomplished ambiguously. The majority "Farmers" take pride in counting passed legislation, which is to supposedly deal with various "weeds", while the opposition complains about the parliament's chaotic work, seeing no meaning to such initiatives, Lietuvos Žinios reported.

Having worked for four months, the Seimas has dispersed until autumn. This term's unique points were revealed on the last day of the session during the deliberations on forestry reform.

The "Farmer"-Conservative agreement, which is viewed as a political trade, has antagonised the coalition partners. The "Farmers" themselves were glad to have found a new means of attracting allies.

Related articles
Social Democrats to decide on staying in Government coalition in late September or early October
Coalition - a party of three?

So far predictions of the Lithuanian Farmer and Greens Union (LVŽS) group's fracture have not come to pass. Other than Greta Kildišienė who relinquished her mandate in January and Bronius Matelis who moved to the mixed Seimas group due to this story, the LVŽS group decreased by only one member during the spring session when Dovilė Šakalienė moved to the Liberal Movement (LS) group.

There are talks of others considering departing in autumn. During the spring session, notions of inquiries arose for three members of Seimas. The results await in the autumn session.

LVŽS deputy group prefect Virginijus Sinkevičius was lauded that many of the planned strategic reforms began proceeding during the spring session. "Forestry reform was yet another step forward," the politician said. According to him the Seimas, LVŽS group and coalition government's work has become more constructive.

"I believe that the diverging voting regarding the forestries is too exaggerated. We spoke a great deal about this reform with our partners, both parties made many concessions, just didn't come to terms over an essential factor. However I am not angry because the Social Democrats acted in a gentlemanly manner – immediately stating they will be voting against. We then also warned we will seek other partners," V. Sinkevičius said.

According to him, in autumn awaits the difficult budgeting process. "Both we and our partners want the people to feel the utmost aid of the state. We will seek ways to make it happen," the "Farmer" assured.

According to the politician, the opposition often presented populist proposals, well understanding that financial capacities to accomplish them were not present. "But its work is to demand the impossible from the majority and given the opportunity, to try and trip it up. I am glad that in a number of strategic questions we did find agreement after all," he said.

The prefect of the Social Democrat Seimas group Andrius Palionis described the session as rather difficult. "Looking at the work in June, bar the Forest Law, the mark I would give in advance is eight," he said. The Social Democrat believes that the dialogue between the coalition's partners could be more intensive and not only on procedural matters. "Sometimes it was incomprehensible, why they are stubbornly persisting despite our arguments being, it would appear, logical and rational," Palionis stressed.

The leader of the opposition Homeland Union – Lithuanian Christian Democrats (TS-LKD) party and its Seimas group prefect Gabrielius Landsbergis gave the parliament's work a six out of ten. "The feeling is that the majority have their hands in the air while on a sled speeding down a tall wooded hill. And no-one knows how the descent will end – falling down, hitting a tree, breaking a leg? Chaos, disorder and total incomprehension of direction," he described.

According to the head of TS-LKD, there no longer are any explanations for what is happening in parliament that could be based on political science. "This is unfortunate for Lithuania, it obstructs the enactment of crucial reforms," he stated. G. Landsbergis guesses that such a situation could continue in autumn. However there is a possibility that the "Farmers" will have had enough of such proceedings and will seek support in the opposition.

"I believe that we will find ways to help them. In autumn there will be many important tasks – the budget, tax reform. The question here is who will take responsibility. If TS-LKD is heard out, we will be prepared to work even from the opposition," Landsbergis pledged. On the other hand he claimed he has no doubt the Social Democrats will not leave the coalition.

LS group prefect Eugenijus Gentvilas admitted he is disappointed, calling the session poor. "I believe that the main accents were outlined in the president's annual address. However it matters not to the "Farmers," the liberal said.

According to him there have been no breakthroughs in any single sphere. "The majority is playing some sort of games and gas no ambitious future plans, nor are they creating any," E. Gentvilas said. According to him the LVŽS leaders shirk communicating with other groups. "There is no dialogue. I understand when the Social Democrats complain the "Farmers" don't talk. The "Farmers" are arrogant, think up ideas somewhere in the background and push it forward. They only talk once they realise they will not have enough votes. This will not go far," E. Gentvilas explained. The liberal scored the work with a four.

During the spring session the Seimas held 62 plenary meetings where more than 420 pieces of legislation were passed. The main attention was dedicated to increasing the public sector's effectiveness and transparency, questions of healthcare, education, culture and science, national security and national defence, also there were numerous projects in the spheres of legal questions, finance, energy, economics and others that were discussed.

The session also featured President Dalia Grybauskaitė's annual address, the cabinet's annual work report. Among the chief works – the enactment of the new Labour Code amendments, with the Labour Code coming into power on July 1, passing forestry reform, approving the plan for state university optimisation and passing amendments to alcohol control legislation. Changes were also made to the Civil Code, which seek to ensure children's security in families and speed up the processes of childcare and adoption.

Coalition - a party of three?