ELECTIONS. The most likely coalition governments after elections 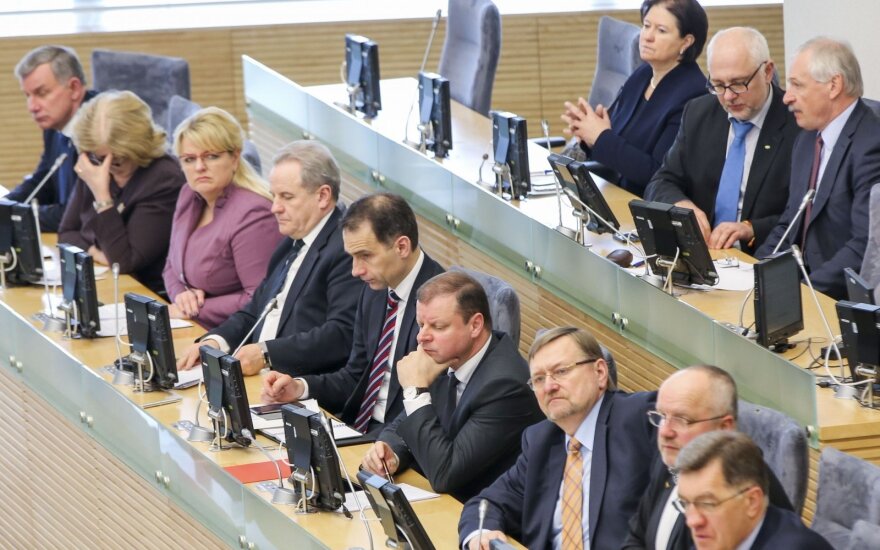 The Government's Hour at the Seimas
© DELFI / Tomas Vinickas

With only a couple of weeks remaining to the Seimas elections, the electoral campaigning isn‘t the only thing to reach a fevered peak, so are the calculations and debates on who will form the coalition government after the election. Rumours abound that the major parties have already started negotiating.

The news portal tv3.lt asked party leaders about the sort of coalitions they are considering. Not all of them were willing or able to go into details however.

There are ample rumours of the Lithuanian Social Democrat Party (LSDP) representatives already negotiating with the Lithuanian Peasant and Greens Union (LVŽS) on cooperation after the Seimas election, but LSDP deputy Chairman Algirdas Sysas was unwilling to reveal which partners are priorities.

He noted that the current coalition could carry over into the next term, even if it had been tough. Neither, however, does he deny the possibility of a “rainbow” coalition with the Homeland Union-Lithuanian Christian Democrats (TS-LKD), stating that there might be individual disagreements between members, but then it would simply be necessary for both parties to make some concessions.

The Chairman of the TS-LKD Gabrielius Landsbergis was rather specific, pointing out that his party would not seek to work with either the Labour Party or the Order and Justice Party, adding that for now he sees little reason to partner up with the LSDP either.

“Our main partners could be the Liberal Movement and the “Peasants” [LVŽS] because many points in our programmes are compatible and I believe such a cabinet could work with little difficulty,” Landsbergis told tv3.lt.

The Labour Party Chairman Valentinas Mazuronis did not highlight any specific parties he’d want to work with in a coalition, simply pointing out that he would like a similar coalition as the current one to continue; perhaps with the addition of one more party, stating that “There could be participation by the Liberals, if they enter Seimas, could be the Polish Electoral Action, especially since they already were in the coalition government.”

The head of the Order and Justice Party Rolandas Paksas revealed to tv3.lt that he has already discussed maintaining the current coalition in the new Seimas term. That said he notes that his initiative does not seem to have gained too much traction.

Beyond that he noted his party could essentially work with almost any other, albeit it would be tougher with the Liberals or Conservatives.

Senior member of the Liberal Movement and the key figure in the current campaign for the party Eugenijus Gentvilas stressed that his party could look at venues of cooperation with all parties, albeit noted it would be tougher with the Labour Party and the Order and Justice Party.

“Our priority is the Centre Right, so I would firstly see cooperation with the Conservatives and the Peasant Greens, but other possibilities cannot be dismissed because I do not know if everyone will manage to come to terms,” stated Gentvilas, adding that the Liberals are prepared to negotiate with the Social Democrats as well.

The Chairman of the LVŽS Ramūnas Karbauskis stressed that his party continues to be prepared to negotiate with all parties, albeit they would not be willing to tolerate the presence of the Labour Party or the Order and Justice Party in their coalition.

“We won’t dismiss anyone who stands for a cabinet of professionals, except two parties we have long since named, the Labour Party and the Order and Justice Party. We could be unable to work with them due to the lack of transparency related with these parties. The Liberal Movement is not clear at the moment, but while there is no specifics, they remain a potential partner. It is not clear if they will pass the 5% barrier,” mused R. Karbauskis.

The Chairman of the Lithuanian Electoral Action of Poles – Christian Families Alliance (LLRA-KŠS) Waldemar Tomaszewski is firmly convinced he would be unwilling to work in a coalition with parties that are, according to him, corrupt such as the Liberal Movement because “all boundaries have been crossed”. He also claims that the Conservatives failed to achieve anything much during their tenures. Tomashevskiy also points out scandals at relatively high levels in other parties such as the LSDP and TS-LKD. The leader of the LLRA-KŠS does, however, hint that he would be willing to join what is now the current coalition once again [the LLRA-KŠS left the current coalition earlier in the term].

Vilnius University Institute of International Relations and Political Science (VU TSPMI) Associated Professor, political analyst Kęstutis Girnius sees three potential coalitions in the making. The first variant is the LSDP, LVŽS and a third partner. This is based on current poll data which is led by the Social Democrats and “Peasants”. The second and, according to analysts more likely, coalition would be formed by the TS-LKD, LVŽS and a third partner, likely the Liberal Movement. The third potential variant is a “rainbow” coalition of the three most popular parties at the moment the LSDP, LVŽS and the TS-LKD.

The first variant struggles due to the disagreements the LSDP and “Peasants” have on the new Labour Code where R. Karbauskis spoke strongly against overruling the President’s veto, something that puts him on the radical opposite of the LSDP who were the key force behind the project. Furthermore such a coalition would likely require the LVŽS to work with parties they have pointed out they do not wish to work with – the Labour Party and the Order and Justice Party.

Girnius was echoed by the ISM Management and Economics political scientist Vincentas Vobolevičius, who noted that the Liberal Movement could become the third party, if they manage to pass the 5% vote mark. If not, he notes it is doubtful any other variant exists since the “Peasants” will be unwilling to work with Labour and Order and Justice.

The second variant is particularly likely due to the compatibility of the programmes involved. Girnius notes that if the liberals perform well enough, they are very likely to enter the coalition as well in such a case. Finally this sort of government would be supported by the President due to the presence of the Conservatives in it; if the “Peasants” gain the most votes, the President would likely nudge them toward a partnership with the Conservatives as well.

A “rainbow” coalition is not out of the question anymore as there isn’t as much difference between the Conservative and Social Democrat agendas currently, albeit it would be met with controversy. “Of course Conservative voters would dislike this, Social Democrat Voters would also dislike it, but if there was no other way to build a majority, then such a coalition would not be the worst case scenario because lately there have been no major differences between the Social Democrats and Conservatives,” points out the VU TSPMI associated profes. He notes that previously differences were accentuated in foreign and defence policy, but with the strong stance against Russia being nigh universal as of late, the two sides are brought closer.

ELECTIONS. A problem of ideology for young voters

The three months leading up to a major election such as that to Seimas is filled with debate,...

With the elections less than two weeks away the Lithuanian Free Market Institute looks at some of...