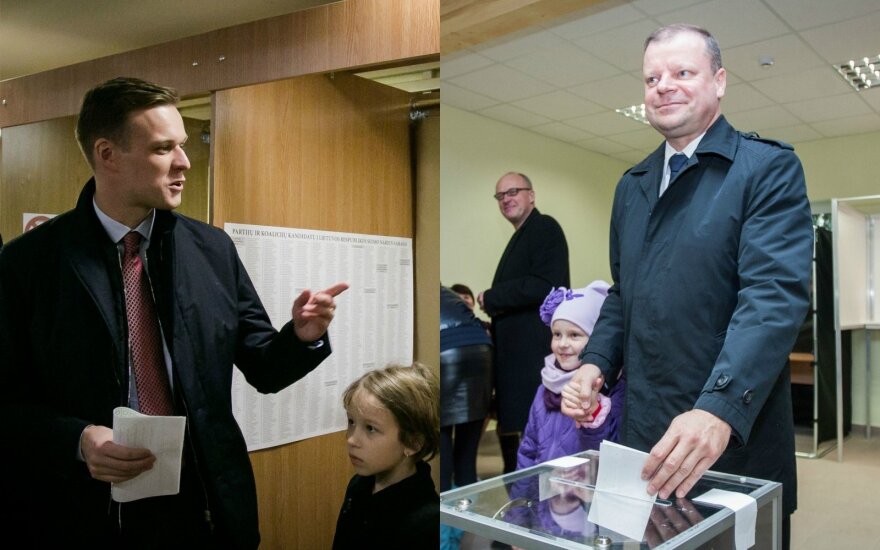 With the first round of the Seimas elections concluding, the Homeland Union – Lithuanian Christian Democrats (TS-LKD) and Lithuanian Peasant and Greens Union (LVŽS) have taken the lead, with both parties very close in vote count. BNS has talked to political analysts and the general concensus currently is that these two rightist parties will most likely form the new coalition. Nevertheless, this is not yet a given; if the parties remain neck and neck as they are now, the negotiations are likely to be particularly challenging.

Related articles
2nd round of Seimas polls to include most Conservative, Peasant&Green candidates
Lithuania needs changes but stability important for business after eletions - Dargis

“We can conclude that there is more than one winner in this election, we have two and they are both in practically identical positions. It looks like over the last two weeks and perhaps even after the final ratings were announced, voters were still weighing their options on who to trust with their vote and in the end they chose these two opposition parties,” Vilnius University Institute of International Relations analyst Mažvydas Jastramskis told BNS.

Vytautas Magnus University Political Science and Diplomacy Faculty analyst Mindaugas Jurkynas concludes that the most likely coalition going forward is a combination of the TS-LKD and LVŽS, with the Liberals entering as a third partner.

“Results show that the core of Lithuanian governance is shifting to the right. […] The gravitational centre is shifting toward the Conservatives, who should, I believe, have the most mandates after the second round and the “Peasants”. Perhaps the “Peasants” also have a chance to earn the most mandates, but I would say that the Conservative electorate is more mobilised. Adding the Liberals, this should be the coalition that the next cabinet will be based on,” said M. Jurkynas.

M. Jastramskis believes that the forming of the coalition government could be very difficult due to the narrow gap in votes between the TS-LKD and LVŽS.

“The coalition could start to be forming if one of the leading parties had a significant lead and then it would be clear who has the advantage and initiative. Meanwhile nothing is clear, the “Peasants” have 20 mandates in the multi-mandate electoral district, and the Conservatives have 19. 21 “Peasants” and 22 Conservatives have taken first place in their districts and moved into the second round of the elections in the single-mandate electoral districts. If all of those currently in first place win and things stay the same, then both parties will have roughly the same number of mandates. This won’t necessarily be the case, but looking ahead both parties have almost identical positions. And of course both will believe that they should take the initiative in forming the coalition,” spoke the expert.

In such a situation he believes that the Social Democrats’ (LSDP) influence rises because their support for whichever coalition could be key. For the LSDP, however, being the party that ended up third, Jastramskis finds that it would be best to remain in the opposition and not to attempt to struggle into a coalition government.

“It would be more rational for them to not try and struggle into a coalition because being in power for another four years may cause the next election to go even worse, with this one already having been poor. If they do decide that they have to enter the cabinet no matter what, their position in negotiations would be decent, but from the long term perspective they could think about perhaps a leadership change, improved image and a renewal in party membership and ideology while spending four years in the opposition,” spoke Jastramskis.

M. Jastramskis notes that the situation could get complicated if the Conservatives and the Liberal Movement would form an alliance prior to the second round.

“The “Peasants” will definitely not want to be the second power, which will have to settle with a few ministers,” notes the analyst.

Meanwhile he notes that the fall of the Labour Party during this election was extremely unexpected. The party which was among the big winners of the previous election failed to pass the 5% vote barrier and enter Seimas this time. In 2012 Labour breezed through the first round, taking first place with a confident 19.8% of votes.

“The fall of the Labour Party could be predicted, a significantly poorer performance. But such a bad performance, I would like to stress, is the first time in the history of the Lithuanian Seimas where a party that took first in the multi-mandate electoral district would end up failing to pass the 5% vote barrier in the next election. Up to now all parties which earned the highest vote count in the multi-mandate district would manage to at least scrape together 5%,” said M. Jastramskis.

M. Jurkynas noted another surprise development – the Liberal Movement’s performance. The party was hard hit by a corruption scandal, with ratings predicting a grim outcome. Another surprise would be the fallen popularity of the LSDP, with the party leader Algirdas Butkevičius failing to once again win his district in the first round as he had for a number of prior elections.

“This shows a shift in political moods, that there is a demand for political change. The full scale of this will become visible after the second round,” he said.

With data from 1954 districts of 1996, preliminary counts suggest that the LVŽS earned 21.7% of the vote and the TS-LKD – 21.5%. According to such results the “Peasants” have secured 20 seats in Seimas, while the Conservatives have 19.

2nd round of Seimas polls to include most Conservative, Peasant&Green candidates

The conservative Homeland Union – Lithuanian Christian Democrats and the Peasant and Green...

Lithuania needs changes in areas, such as education, however, the important thing for business is that...

People of Lithuania voted for change, President Dalia Grybauskaitė said in comment of the outcome...

The Lithuanian Peasant and Green Union heads the first round of Lithuania's parliamentary elections...