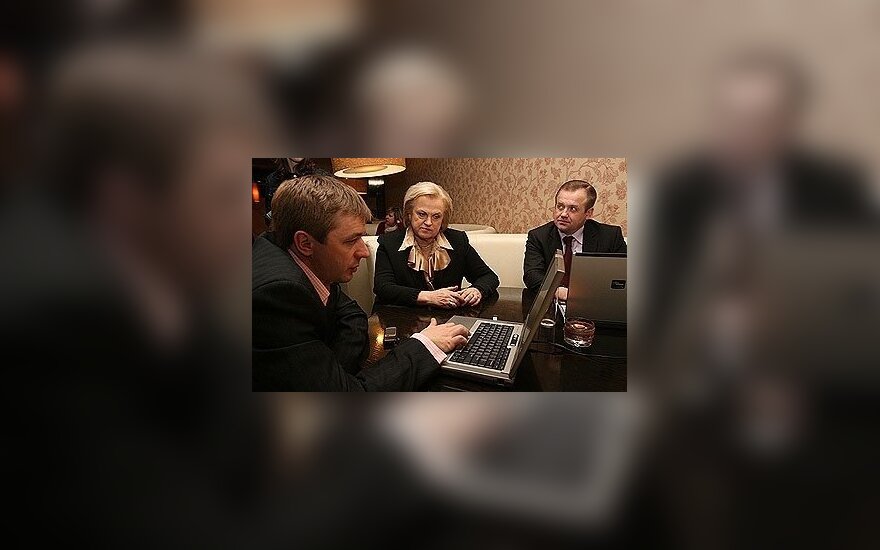 Origins found in the interwar period

The LVŽS consider themselves to have originated from the Lithuanian Popular Peasants’ Union (LVLS), which was active during the interwar period between World War I and World War II. It had been officially reinstated in 2005. However, in the years of Lithuanian independency, in 1990, it started as the Lithuanian Peasant Union. In the Seimas elections of 1992, the party suffered a loss, with only one single-mandate candidate winning a seat.

The party was advocating in favour of restoration of the cooperative system within Lithuanian villages, creation of a credit bank system for farmers, land reform and socially oriented state politics. Ramūnas Karbauskis, the current chairman of the party, started leading the party in 1998. He was elected as the head of the political movement.

Later on, the peasants joined with the Lithuanian Women’s Party. Afterwards, it started calling itself the New Democracy Party, headed by Kazimira Prunskienė. The unified Peasants and New Democratic Party Union managed to enter the parliament in the 2004 elections. Members of the MG Baltic business group congratulated the party’s not-so-impressive results on their results. MG Baltic is a name that currently circulates many topics regarding political scandals.

Ms. Prunskienė blamed low voter attendance on the poor results. “The results don’t bring us happiness, we expected twice as many votes. But that‘s the will of the people, and the voter turnout wasn‘t great either. “

On the 100 anniversary of the party switched back its name to the historic Lithuanian Popular Peasants‘ Union.

But that didn‘t last long. In 2008, the party changed its name again to something it had been using ever since, becoming the Lithuanian Peasant and Greens Union. At the time, Mr. Karbauskis said the appearance of the word Green in the party‘s name represents the work that the party has been doing throughout the years. Mainly the fact that they are the only party with green values: they were against the idea of a nuclear power plant in Lithuania and supported the development of renewable energy sources, something that creates work places in Lithuania.

One of the country’s richest people – chairman of the party

Even though the party consistently gained several seats in the parliament, it never played a large role in the European Parliament or municipality elections, nor did it have an impact on the country politics.

Regardless, Mr. Karbauskis was always influential, as he was one of the country’s richest people and biggest landowners. He is a person that holds value in his homeland, temperance, family and hard work. But the media has stories of twists and turns related to him and his business.

Officially, the landowner managed to increase his wealth ten-fold during the last two decades. He explains it as being farmer that had large returns on investment. However, there are several stories about smaller farmers being hurt or having their land stolen by Mr. Karbauskis. Or more exactly, having their land bought by him for a measly price. These are all just legends that can be hard to prove, as they could be fake. Either that, or the smaller farmer fishes in the pond might be afraid of talking against and, consequentially, being eaten by the big shark of the farming business.

DELFI sources say that farmers are afraid of the rich landowner‘s wrath, so they stay quiet. It is rumoured that a large share of the wealth that Mr. Karbauskis has consists of the land and businesses that he took over from these farmers. They were baited through the contracts offered by his agricultural company, Agrokoncernas. The contracts ended up hurting several farmers.
The party leader denies any allegations and claims that they‘re all political slander. However, when publicly available court decisions are read, it seems that the activities of companies owned by the politician caused headachaes to many farmers.

For example, according to a case from 2010, a person used his expensive grain harvester as a mortgage security to Agrokoncernas. The farmer could not return the debt according to the regulations in his contract, so the company filed a request to seize the farmer‘s assets. Even after the company had taken over the person‘s grain harvester, they still wanted to keep their assets seized. Thankfully, the court ruled a resolution favourable to the farmer.

Agrokoncernas requested an exaction of a 143 thousand Litas debt from another farmer, with an additional 15 % considered as damage payment and another 1.5 % monthly interest rate for missing the deadline for his payment.

The court decided not to investigate into the matter and specified that the request was not clear and did not comply with the provisions found in the contract. After these court cases were brought up, the politician stated that the harvester situation was a misunderstanding. He said that debts were exacted through courts only on special occasions, when the debtor refuses to pay back and the interest rates are calculated by taking market conditions into account. The fines were, supposedly, just a formality.

Statements against the euro and other changes

One more interesting fact is that the 1996 biography about Mr. Karbauskis documents that he founded Agrokoncernas. The company represents several other enterprises in Lithuania.

One of them is the Russian company group Acron, known as one of the biggest fertiliser producers in Russia and the world. It is owned by an exceptionally rich Russian businessman and oligarch that has ties with the Kremlin. Mr. Karbauskis says that he has absolutely nothing to do with Russia or its businessmen.

The politician was a harsh opponent of the Visaginas Nuclear Power Plant project, shale gas prospecting in Lithuania and sales of Lithuanian land to foreigners.

“The countries that are our neighbours, like Poland and Hungary, act in a different way. Hungarians have made constitutional amendments to prohibit foreigners from buying land. There is a statement to be made here: if the EU had not discriminated against Lithuanian farmers (me included), who are in danger of losing their benefit payments, we would not have to discuss this question,” – Mr. Karbauskis stated.

Similar views this allowed others to accuse the politician of having ties to Russia. In order to defend himself, he sued the leader of the opposition in Seimas, the conservative Andrius Kubilius. “Views against the power plant, shale gas or sale of land to foreigners are often considered pro-Russian. The conservative party’s ideology is based on exactly this. Those, who don’t vote for the conservatives are accused of being Russian sympathisers,” Mr. Karbauskis believed.

The landowner is also tied to Naisiai, a village in the Šiauliai district. They say that there are no drunks there and only peace and quiet exists. There is also a TV series titled Naisių Vasara. Mr. Karbauskis was the producer and writer for the show. It later became a summer festival, devoid of any drinking. The only way of getting intoxicated there is through smelling the air, or enjoying the clear water and greenery.

Party members contradict one another

Another luminary of the party is Saulius Skvernelis, who started as a policeman and climbed up to become the Minister of Interior. He was criticised after the Sergey Molotkov incident, where hundreds of policemen searched Vilnius for the criminal who stole a submachine gun from a careless police officer and ran away. Following this, Mr. Skverenelis was encouraged to step away from his post.

The public view of him was further skewed when Loreta Graužinienė called him to clarify the situation. He said that calls like this disrupted his work. The President, Dalia Grybauskaitė, deemed the Minister’s actions as having a low political level.

In the end, Mr. Skvernelis handed a statement of resignation to the Prime Minister Algirdas Butkevičius. Following lengthy discussions, Mr. Butkevičius stated that he was happy with the work provided by the Minister of Interior, and that he would not be signing on the resignation. Mr. Butkevičius said that mistakes of individual officers are not tolerated, but also added that the Minister managed to do a lot in the short amount of time and gained the trust of both trade unions and the public. The Prime Minister also stated that his work is of much higher quality when compared to past Ministers and that the way that the system works should be reformed.
Following this, Mr. Skvernelis said that what prompted him to stay was the trust that the Prime Minister had in him and his personal desire to work within the internal affairs system.

“I appreciate the trust that the Prime Minister has given me and his support for all the work that we do within the ministry. I acknowledge the support from the public and choose to in the team of Mr. Butkevičius until the end of our term,” Mr. Skvernelis said.

Ms. Graužinienė reacted to this by saying that she would only communicate with the Minister of Interior through the Prime Minister. It seemed as though Mr. Skvernelis was going to continue his work, but after announcing that he would be taking part in the Seimas elections with LVŽS instead of his delegated party, Order and Justice, he left the post.

There are a lot of dividing opinions within the party. The party leader, Mr. Karbauskis, is in favour of the traditional family, while Mr. Skvernelis is inclined to support partnerships.

Dovilė Šakalienė, is a non-party candidate endorsed by the LVŽS. She has been an advocate for equal rights her whole life, but is now trying win a seat in Seimas with a party that has views she does not agree with.

The party currently has more than 3.5 thousand members. It declares its political position as centre-right.

Ramūnas Karbauskis , the leader of the Lithuanian Peasant and Green Union who voted early in the...

Peasants, conservatives catching up with SocDems in popularity

The ruling Social Democrat s continue to top Lithuania's popularity rankings, but other parties are...

Karbauskis, one of the wealthiest men in Lithuania

The Chairman of the Lithuanian Peasant and Greens Union Ramūnas Karbauskis is also held to be one...