DELFI
With the Seimas election having concluded, it is time to sum up the results. The overall victory goes to the Lithuanian Peasant and Greens Union (LVŽS) which has earned 54 Seimas seats. Add another two independents, who now associate with the party roll – 56. This is the largest single-party victory based on mandate numbers since the 1996 victory of the Homeland Union of 68 mandates. 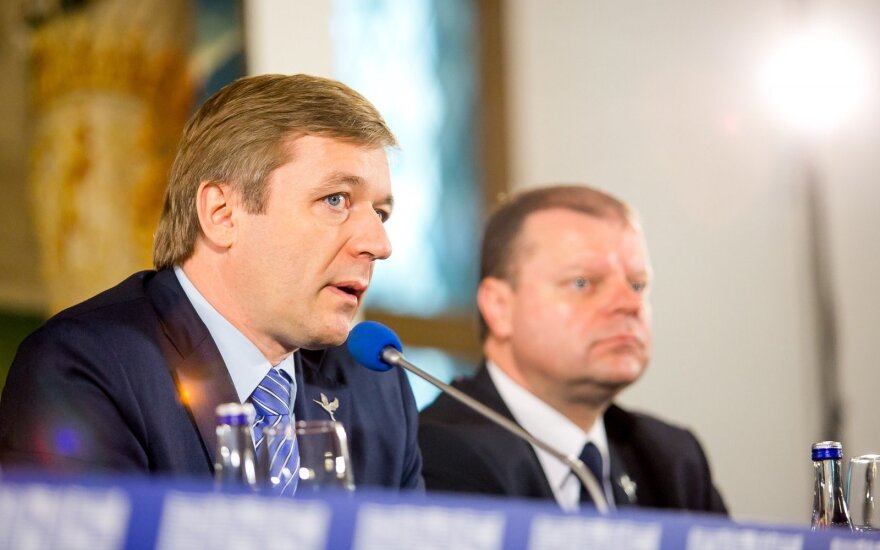 The results mean that the LVŽS will become the main party in the formation of a coalition government. Based on the Constitution, the Prime Minister is assigned by the President with support from the Seimas. The PM is then tasked with forming a cabinet. This means that President Dalia Grybauskaitė will also actively participate in the forming of the cabinet.

The “Peasant” Chairman Ramūnas Karbauskis has often mentioned that the party proposes Saulius Skvernelis to be PM, with mentions of Bronius Ropė being a potential alternative, if the “Peasants” were to take the seat of Seimas Speaker.

Related articles
Karbauskis: I am convinced president understands nation's will
Peasants & Greens' leader sees Skvernelis or Ropė as next PM

With who could the “Peasants” form a coalition?

“I see no difference between the Conservatives (TS-LKD) and the Social Democrats (LSDP). They have to deliberate on their circumstances. They have to first of all decide if they want to be in a coalition government. Then decide what compromise they are prepared for in terms of both their and our programme,” said Karbauskis on election night.

“Whatever majority comes together, will,” he summarised.

Karbauskis claims that he sees potential in a grand coalition formed from his own party, as well as the TS-LKD and the LSDP.

The LVŽS Chairman stated that he is not proposing any alternative coalitions for now. According to him, the negotiations with the Conservatives could be led by Rima Baškienė, while those with the Social Democrats – by Stasys Jakeliūnas.

This is an eloquent and perhaps irritating toward the Social Democrats move – S. Jakeliūnas is a former advisor to PM Algirdas Butkevičius, who resigned due to disagreements. That said, Butkevičius has claimed that Jakeliūnas was asked to withdraw.

The Chairman of the Homeland Union – Lithuanian Christian Democrats Gabrielius Landsbergis stated that his party, which earned a total of 31 mandates, does not dismiss the possibility of working in the opposition. By the way, the TS-LKD performed even worse in this election than in 2012, when they won 33 mandates. Landsbergis is sceptical of Karbauskis’ idea of a grand coalition.

“This negotiation with both the left and the right is odd. I feel like a product at a market, which can be tossed away if your provisions are not suitable and then taken back, if they are suitable,” the politician said.

“For now I look at this possibility with a smile for several reason, which have not changed between today and yesterday. That is that the Social Democrats are not a renewed party, which has nothing to do with change,” he added.

Landsbergis sees the potential to work in a coalition with the “Peasants” only if they concede on their most radical provisions. He did not specify, but during election night, the politician mentioned a number of times he disagrees with state monopoly on alcohol sales and state pharmacies. He was not overly positive regarding the “Peasant” candidate choice from Minister of Education and Science. It cannot be denied, however, that the Conservative leader’s talk of working in the opposition could just be preparation for negotiations.

The Social Democrats would not say no to negotiations with the “Peasants.” However the party only won 17 mandates, thus their coalition with the LVŽS would only have 73 votes, a possible, but fragile coalition. With the Conservatives partnering with the LVŽS it would be wider, reaching 87 members.

“We are not saying we won’t talk or intend to be stubborn for whatever reason,” said Social Democrat leader Algirdas Butkevičius, who failed to win in his single mandate district of Vilkaviškis.
R. Karbauskis has earlier refuted the potential for a coalition with the Liberal Movement, Polish Electoral Action and especially Order and Justice. S. Skvernelis is more lenient to the Liberals and Poles, expressing that he sees potential for partnership with these parties.

The Lithuanian Peasant and Greens Union has already announced a number of its shadow ministers, but not all. R. Karbauskis has also announced that the Minister of National Defence should be chosen by the President because according to the Constitution she is the commander-in-chief of the armed forces.

R. Karbauskis continues to declare an aim of forming a so-called cabinet of experts, although the definition of a professional-expert was defined rather narrowly by the politician – a specialist individual or one with the relevant diploma. The idea has so far not received much support from either the Conservatives or the Social Democrats, but it may be acceptable for the President.
The head of state should traditionally invite the leader of the winning party to a meeting after the election.

Seimas elections: all Karbauskis does is draw red lines - Landsbergis

Ramūnas Karbauskis , chairman of the Lithuanian Peasant and Green Union, has won a seat in the...