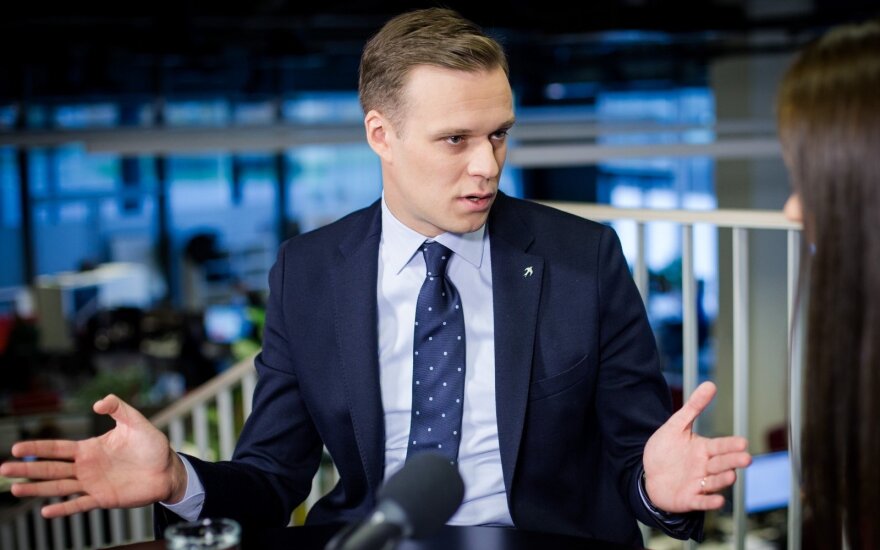 The list of demands presented by the Peasant and Greens Union (LVŽS) continues to expand noted Gabrielius Landsbergis, the chairman of the Homeland Union – Lithuanian Christian Democrats (TS-LKD) in an interview on LRT Radio. According to him, unlike their rivals, the Conservatives intend to present a list of tasks they would like to accomplish.

G. Landsbergis was happy to observe that education is finally a priority for the main parties planning to form a cabinet. According to him, given this the party intends to raise expectations for tasks that need to be done.

“My personal position, unlike the LVŽS chairman Ramūnas Karbauskis, who arrives with a myriad of demands and an ever increasing list of how he sees potential negotiations could go. It is most important to agree on the tasks that we should accomplish over the coming four years,” stressed Landsbergis.

He added that these tasks should be done by the most competent individuals and not representatives of a specific party, stating that “We need an individual who knows the work and can perform it best. Such will be my position at the negotiating table. I will not walk any red lines, a list of ministries or some sort of set in stone demands, which would complicate the negotiation process. Let us just agree on the tasks. If any person performs those tasks, even if they are not a member of my party, so be it. I see no big issue.” Nevertheless Landsbergis accents that it is early to plan on which parties will form a coalition government.

Journalist Paulius Gritėnas points out that it is not the TS-LKD’s opinion that matters, but also what position the LVŽS takes. “In the pre-election debates Ramūnas Karbauskis mentioned that there are parties he will absolutely not negotiate with – the Labour Party and Order and Justice. From what is being spoke now, it appears they are also sceptical about the Liberals. I believe that for the “Peasants” it would be more beneficial to have a two party coalition, to attempt an even ideological struggle with the Conservatives,” noted Gritėnas.

He adds that another factor that could be deciding in the formation of a coalition is R. Karbauskis’ own interests which the public are not aware of. “We know the people who surround him, for example Saulius Skvernelis, who is known as an upright officer. But what R. Karbauskis is thinking and what his interests are, there are certain programme tasks. He has unclear business connections with the East. I do not know how much these connections concern Landsbergis, but I believe that looking at how the coalition is being put together, it should,” stated the journalist.

Landsbergis agrees that Karbauskis has not brought up specific goals: “So far I have heard many ideas of what reputable Karbauskis will not do. Initially there was talk about certain parties, now the Liberals are mentioned, then ministries… I think that the list is extending greatly and sometimes I feel like I am already in negotiations on a future coalition,” said G. Landsbergis.

He adds that when negotiations begin, the TS-LKD will present its own list of demands and expectations. “I will then present my key tasks and we will see where we match. I want to stress – all demands, knowing negotiation methods will be unlikely to reach. This means that everyone has to step back somewhere,” said G. Landsbergis.

The head of the East Europe Studies Centre Linas Kojala directs attention to a potentially difficult situation that could form after the second round, if neither the TS-LKD, nor the LVŽS leap ahead. “We are used to thinking that the senior coalition partner takes the post of Prime Minister, while the junior partner almost automatically receives the post of Seimas Speaker, while everyone else divvies up what remains. This, without a doubt, would be a more difficult negotiation,” says L. Kojala.

According to the expert two parties should come to agreement far easier than a coalition of four or even five parties.

“If a third element appears, the Liberals, then things become more difficult. But we cannot forget alternatives, for example two parties could form the cabinet while the third supports the majority in parliament, but takes a more passive stance in other activities,” stated Kojala.

According to him, the situation is positive in this election because the main actors in the Lithuanian political system are emerging and we can talk about cabinets that will later be better able to take responsibility for their promises and their implementation, rather than hiding behind how hard it is to obtain consensus between coalition partners.

First round of ELECTIONS – electoral rolls and party results