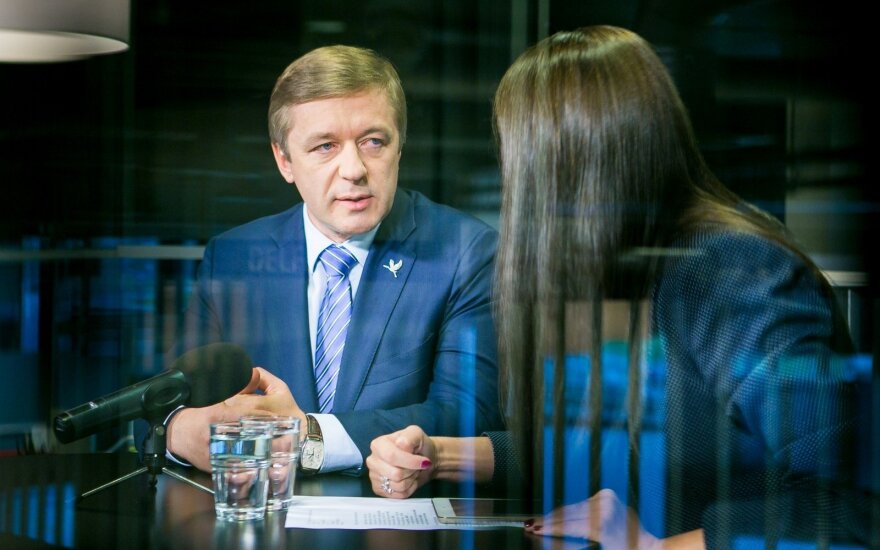 Having won the victory in the Seimas election, the Chairman of the Lithuanian Peasant and Greens Union (LVŽS) participated in a Delfi press conference on Monday, answering key questions. The LVŽS earned 54 mandates in Seimas. Adding two independents who joined the party roll – 56. This is the greatest single-party victory since 1996 when the Homeland Union won 68 mandates. The current results mean that the Peasant Greens will become the main force behind the future coalition government.

“In the name of Lithuania, the reason we participated in this election, I believe both the Conservatives and the Social Democrats could participate (in the coalition – Delfi). However based on current statements I see several differences. We speak of our main goal being the reduction of emigration rates and the resolution of demographic decline and social separation,” Karbauskis described his expectations.

According to Karbauskis, lately there has been much debate, however it is time to decide whether those elected to Seimas are prepared to work for Lithuania.

“Just our fraction, I believe, will contain around 60 individuals. There will be no questions of instability or stability, we ask how prepared the politicians are to overcome personal ambition. The elections have ended, you can cease speaking in slogans, it is time to coordinate our programmes,” he explained.

Wants both the PM and Seimas Speaker posts

The “Peasant” Chairman Ramūnas Karbauskis has often mentioned that the party proposes Saulius Skvernelis to be PM, with mentions of Bronius Ropė being a potential alternative, if the “Peasants” were to take the seat of Seimas Speaker.

“I believe that the result is such that both posts should belong to the LVŽS,” noting that Skvernelis could become Speaker, while Ropė – PM.

Thus far he has not confirmed this to the President however, as a coalition has not been formed yet. That said he has not denied the possibility of alternate candidates being selected.

A number of ministers still not announced

Karbauskis was unable to specify the candidates for a number of ministries, supposedly this will be done in a few days when an agreement is reached with coalition partners. Furthermore he expressed preparation to leave the selection of a Minister of National Defence to the President Dalia Grybauskaitė.

On clashes with Landsbergis and relations with Skvernelis

When asked about clashes with G. Landsbergis, Karbauskis explained that the former acted unethically and even amusingly.

“We laughed at it, that the man does not really understand, that those who are delegated will negotiate. How else can the party designate who will be the negotiators. There was much election noise, much stress for everyone, tensions rose,” he said.

Some have observed that Skvernelis and Karbauskis have taken different routes in narrative. When question on this, Karbauskis explained there has been no watershed moment.

“We are not speaking differently. If we are to look at essence of it, we always agree. But I know not where it is possible for opinions to always match. It is a healthy process, we are a democratic state.

But this will not prevent us from working as a team,” explained Karbauskis.

Not satisfied with any ministry

R. Karbauskis believes that in foreign policy it is necessary to strengthen relations with the Visegrad states, Poland, Latvia and others. That said he is not planning any major changes in foreign policy.
“There have never been and never will be any worse relations with Poland. We have to start seeking compromise, we cannot keep pressuring,” said the politician, adding that it is important to make efforts in improving relations.

Nevertheless Karbauskis is not willing to yield on the usage of foreign lettering in official documents, only agreeing to compromise by including the foreign spelling in the second page of the passport.
The key spheres where the politician expects breakthroughs is in education and culture, while noting that there are other important ones as well.

“There isn’t a single ministry or sphere where no problems arise that need solving,” he said on Monday.

When asked about key economic reform, Karbauskis explained that it is important to ensure we do not turn into a state of one city.

“Tax policy has to encourage investing into the regions. We have a problem in Lithuania, that we do not have a policy of regions, everything is concentrated on Vilnius. Speaking of encouraging investment, we have to analyse our competition environment,” he explained.

Karbauskis also agreed with S. Jakeliūnas’ proposals on the second pension accumulation system – he proposes radical reform for it.

According to Karbauskis, he will invite individual members of Seimas to his fraction. Among them – Naglis Puteikis.

“He has said that he is prepared to work in our team,” mentioned Karbauskis, not revealing any further names.

The LVŽS leader spoke on several aspects of the alcohol market.

“Firstly, the prohibition of alcohol advertising. Complete prohibition, akin to the Nordic States. Youth will only be allowed to purchase alcohol from the age of 20. Another question – specialised alcohol stores. The only question which raises greater controversy among potential coalition partners is whether such stores would be state owned or private. I would say state owned,” explained Karbauskis.

According to the politician, the argument that the state will be unable to manage the stores is impossible to understand. These proposals, he revealed, were inspired by the Nordic example.

“In state owned alcohol stores it is ensured that the rights of every producer are defended. Excises are decided by the state. The price will rise, it is rising across the world,” he assured.

On reform in education, Karbauskis explained that tuition should be free for those seeking higher education and fitting certain criteria. He continued with criticism of “student baskets,” that is that there is a myriad of offered study specialties.

“Those who say so, specifically think that someone has to represent someone. However I have clearly said that we have so many problems in higher education that a proposal to close universities is incomprehensible. There are natural processes, they are ongoing. We are seeking a specialist who understands the education system and Vilija is that person,” he spoke on his party’s candidate for Minister of Education and Science.

Regarding national defence, Karbauskis explained that financing should continue to increase for this sphere, but admitted he is no specialist on the matter.

According to the politician it is important to prepare people who are capable of using a weapon, have a minimal base of military knowledge.

R. Karbauskis stated that he is not planning to hand over his trading stocks to anyone else while he is working in politics. He also denied rumours of connections to Russia, claiming he only interacts to the extent of what is needed for business.

“I will definitely not work in the Rural Affairs Committee in order to avoid potential conflicts of interest, I will abstain when voting. I would not want to be suspected of influencing any matter,” he said.

When asked to explain why he isn’t seeking any posts, Karbauskis explained that the Seimas is not performing parliamentary control due to its weakness, something he wishes to change.

“The Seimas today is incapable of controlling the cabinet. If the Seimas contains the leaders of the parties who took their respective parties into Seimas, then it will be very strong,” he shared his expecations.

Feels absolute trust from the President

Based on the Constitution, the Prime Minister is assigned by the President with support from the Seimas. The PM is then tasked with forming a cabinet. This means that President Dalia Grybauskaitė will also actively participate in the forming of the cabinet.

After meeting the head of state on Monday morning, the LVŽS leader said that they spoke on the responsibilities bequeathed upon him and problems in Lithuania.

“It was a warm discussion,” stated Karbauskis, adding that he feels “absolute” trust from the President. He assured that the President respects the LVŽS’ right to build a coalition.

“There was no talk of how she sees the coalition, we spoke on the need to form one in general and our right to initiative. The President respects this right,” spoke Karbauskis.

The Conservatives also received an invitation, he explains that there is no need to read into it and it simply means that both parties won the election.

Karbauskis sees potential for a grand coalition, where his party would partner with both the Homeland Union – Lithuanian Christian Democrats and the Lithuanian Social Democrat Party.
The LVŽS Chairman stated that he is not proposing any alternative coalitions for now. According to him, the negotiations with the Conservatives could be led by Rima Baškienė, while those with the Social Democrats – by Stasys Jakeliūnas.

This is an eloquent and perhaps irritating toward the Social Democrats move – S. Jakeliūnas is a former advisor to PM Algirdas Butkevičius, who resigned due to disagreements. That said, Butkevičius has claimed that Jakeliūnas was asked to withdraw.

The Chairman of the Homeland Union – Lithuanian Christian Democrats Gabrielius Landsbergis stated that his party, which earned a total of 31 mandates, does not dismiss the possibility of working in the opposition. By the way, the TS-LKD performed even worse in this election than in 2012, when they won 33 mandates. Landsbergis is sceptical of Karbauskis’ idea of a grand coalition.