ELECTIONS. G.Landsbergis about his party and shortcomings of the Government 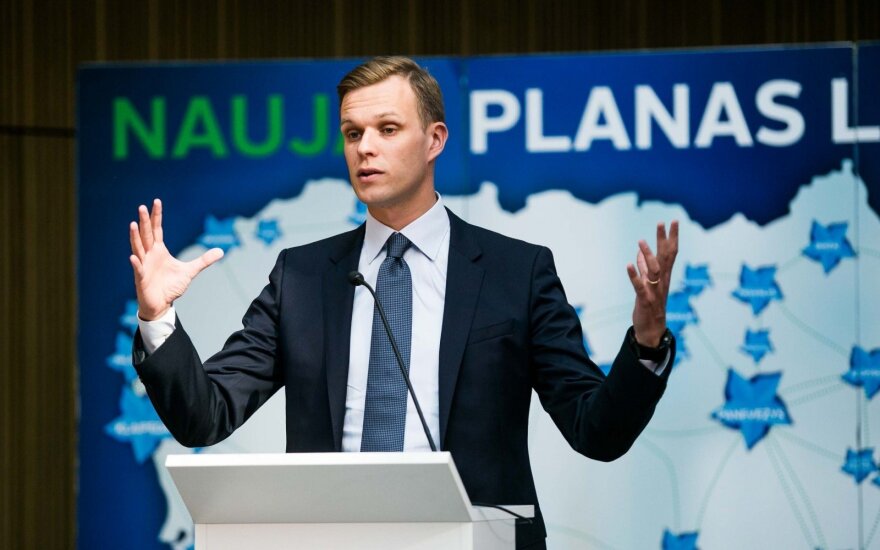 The Chairman of the Homeland Union-Lithuanian Christian Democrats Gabrielius Landsbergis spoke in an interview at the TV3 News studio. The discussion centred on the citizen’s seeking change in politics after the numerous scandals of this year and the politician’s relationship with the rival Lithuanian Social Democrat Party.

This election is marked by many new or unexpected faces leading parties to Seimas. Will your inexperience impact the results of the vote?

There are probably a few reasons. Our party has undergone a renewal with a new chairman and many new names in the electoral roll. This is something we present as an advantage. Looking at other parties we can see a variety of sights. Some party leaders are avoiding leading the party electoral list and thus taking responsibility. To return from the European Parliament. We see one peculiar party where second or third tier individuals are being pushed into the forefront in order to cover the main individual. We have none of this. I believe that the party chairman should be at the top of the electoral listing.

You committed to the elections not too long ago, perhaps it would have been better to leave the EP earlier?

This is what I can say. My colleagues said that I am the first MEP to withdraw from the EP leading up to the election overall. I believe that it is a fair and honourable gesture. I stated it is time to return, Lithuania needs to regain trust in the young generation after the scandals in the Liberal party, after which a part of the voters turned away from Lithuanian politics. I believe that with my example I can change something.

Previously the Conservatives had many older members in their ranks, now there’s more of the young generation. How did you manage to reform the party, did you encounter resistance?

No, I believe that many of the reflections and how the party should look are things in the past. I have been leading the party for two years now. Currently renewal is just another page in the history of the party. Today we are moving forward, we are already talking about a programme, about goals, and we are raising new ones for the election as well. We are happy with the new people to appear in the shadow cabinet, who were not associated with our party earlier. This is where our greatest victory lies.

Mistrust rose even over your own candidacy, supposedly your grandfather arranged the post? Have you shed the shadow of such suspicions?

That bond of family has followed me all my life. To be honest I don’t really try to fight it. You know some say that here, I’m his grandson. Well yes, but so what? I am proud of who I am. I am proud that my grandfather was one of the guides of the Independence movement. I draw inspiration and strength in fighting current problems because I am inspired by my grandfather’s experience. Today I speak about us wanting to fight corruption, about that which can fight bureaucracy.

Recently there have been exceptionally many scandals among the coalition government. You’re probably clapping and being happy that this makes the election easier?

The fact that Lithuania is currently faced with Minister Juozas Olekas’ scandal, the golden spoon scandal, or (Jonas) Milius’, you could say whole range of scandals, which haunts the current coalition. Is this good for Lithuania? Our prestige suffers, people become disappointed with the government, Seimas and the cabinet.

The Social Democrats accuse the President regarding the scandals, supposedly she politicks in favour of the Conservatives. What would you say about such accusations?

An essential criterion, why we select those ministers to the Seimas. Firstly, that ministers such as Olekas, Trečiokas or Baltraitienė would not flee responsibility. Something that they are attempting to do today. Let’s remember what happened with Olekas’ scandal. This cabinet is attempting to cover itself in various ways. Everyone is looking for someone to blame, including the Prime Minister.

And then suddenly Eligijus Masiulis enters the spotlight and all the attention diverts to him. And it looks like everyone forgets those golden spoons. Even though that is unfair, it needs to be remembered. With the company there, it is unclear what and what sort of money it is. <…> Olekas, along with the PM seeks to hide from responsibility, to distance himself from everything. We cannot allow this, so we invite them to Seimas and he has to answer. So people who vote could see their heroes. That is our goal today.

Your family did not escape suspicions in murky dealings due to your wife’s kindergarten facility renting. Is everything truly clean and clear there?

This is primarily Algirdas Butkevičius’ attempt to escape the scandals chasing him. Butkevičius accuses everyone of being guilty. Takes Agnė Bilotaitė to court, later the case deflates. What means does he use to avoid attacks? He accuses my family. Now a second scandal – Olekas and once again unanswered questions. And once again accusations toward my family. I’m the one laughing. Earlier it was Landsbergis at fault, now it’s my wife.

This shows a weakness of the current coalition government – hiding behind made up stories, behind people, acquaintances, relatives. They try to avoid responsibility and this needs to be clearly highlighted. All these questions posed about my family, everything has been answered and made public, and all the documents are on display. But Butkevičius‘ question still stands. Olekas also continues to avoid responsibility.

How was your party harmed by the Liberal Movement scandal?

I see it as a hit to confidence. First of all it is a hit to young people, who are going or were planning to go to elections. Masiulis‘ scandal and all his excuses harm the entire political atmosphere. Confidence has decreased and we can feel it. Our goal is to regain that confidence.

It looks like the Conservatives have followed parties seen as populist by political commentators and are offering an impressive average wage of €1250, twice the current one. How are you planning to achieve this?

Lithuania is at a crossroads today. Emigration continues unceasingly, new jobs don‘t appear in the regions. Our new plan speaks of creating new jobs in the regions. First of all we need to use EU funds to create a strategic investment fund. With its help the Lithuanian economy could attract up to €7 billion. The majority of this investment would land in the regions.

To promote voting in general election this October amongst the diaspora, the Lithuanian Youth...