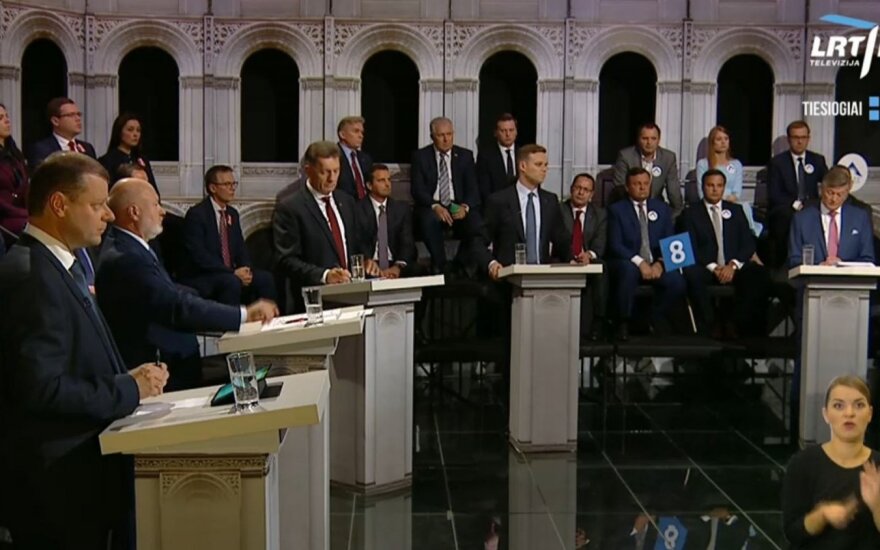 Thursday (September 30) evening LRT Television featured its ninth electoral debate. The topics focused on this evening were law enforcement in general, the work of the Lithuanian police and combatting corruption. The Labour Party (DP), Lithuanian Peasant and Greens Union (LVŽS), Homeland Union – Lithuanian Christian Democrats (TS-LKD), the Republic of Lithuania Liberal Movement (LRLS) and Lithuanian Social Democrat Party (LSDP) crossed swords in the debate. Mykolas Romeris University (MRU) lecturer, political scientist Rima Urbonaitė found the Thursday debate to have been incomparable to the Wednesday (September 29) and Tuesday (September 28) ones featuring the smaller parties, albeit observing a lack of edge to the participants.

Urbonaitė’s positive evaluation was echoed by Kaunas Vytautas Magnus University (VDU) lecturer, political scientist Ingrida Unikaitė-Jakuntavičienė. The expert from VDU observed two very different narratives. On one hand a narrative of continuity and achievement, but lacking offers from the current coalition parties, on the other hand a narrative of critique and suggestions from the opposition alfa.lt reported.

Time to shine and chasing the elephant in the room

“It should have been Saulius Skvernelis’ time to shine, but despite him speaking rather confidently and accurately, he failed to stand out – he was not the leader of this debate,” R. Urbonaitė evaluated the performance of the LVŽS electoral roll leader. Nevertheless she stressed that this was a comfortable niche for the politician, both with his experience in the field and the lack of prior controversies related to him, something that the LRLS leader Eugenijus Gentvilas definitely had to deal with.

Gentvilas had to deal with the elephant in the room, the corruption scandal regarding former party Chairman Eligijus Masiulis. Urbonaitė notes that while Gentvilas would yield the floor to other parties at times, he managed to maintain a clear narrative with accurate retorts to the coalition government parties. Refuting Algirdas Butkevičius and Artūras Paulauskas with facts gave him presence.

The expert noted that the Liberal Movement may yet manage to pass the 5% vote hurdle. Being the most ideologically firm party, it needs to focus on mobilising its core supporters.

Butkevičius shot himself in the foot

The MRU political scientist found the incumbent PM’s performance to have been particularly weak. By speaking of justice, honesty and combating nepotism, then declaring himself a victim of the Vijūnėlė scandal, Algirdas Butkevičius shot himself in the foot. Trying to hide the other elephant in the room, namely facts and R. Malinauskas’ [Druskininkai mayor involved in the scandal] many years in term PM Butkevičius concluded with a performance that reminded more of a report of past activities, rather than a vision for the future.

“It was Landsbergis’ evening. He found a balance between assertiveness and meaningful speaking, something everyone missed in the initial debates, when the offence against A. Butkevičius was particularly pronounced. The best form demonstrated by any politician and achieved right on time, G. Landsbergis is demonstrating it,” claimed R. Urbonaitė.

Political scientist I. Unikaitė-Jakuntavičienė also found Landsbergis’ performance to have been particularly strong, but noted that he, along with the other participants of the debate lacked specific details and ideas, still focusing too much on criticism and vague statements.

Artūras Paulauskas, speaking for the DP was found to have been especially lacklustre, seemingly uninterested in a victory either in the debate, or in the election, only speaking things which voters would want to hear, but failing to appear convincing and coming across as bland. As such R. Urbonaitė observes that “It definitely was not A. Paulauskas’ night.”

Meanwhile Unikaitė-Jakuntavičienė points out that it may be due to the DP’s position, still being in the coalition, which prevented Paulauskas from any pointed critique of current affairs, forcing a focus on what is being done.

Best of the debate

The leaders of the opposition were far ahead of the coalition government’s representatives. R. Urbonaitė found G. Landsbergis’ performance to have been the strongest, with Skvernelis on his heels due to his convincing content. E. Gentvilas earns third place with a good performance despite the difficult circumstances. Both Paulauskas and Butkevičius were found to have been shooting themselves in the leg.

I. Unikatė-Jakuntavičienė did not specify any leader, but praised Skvernelis and Landsbergis for fairly strong performances.

ELECTIONS. Populism and bankruptcy of value based politics. Analysis

ELECTIONS. Frightening pace of emigration – what will be done?