Kristina Pocytė
Parašyti
autoriui
aA
Visvaldas Matijošaitis is celebrating his victory in Kaunas after the first round, however in the other big cities, a fierce struggle over the post of mayor is only beginning. 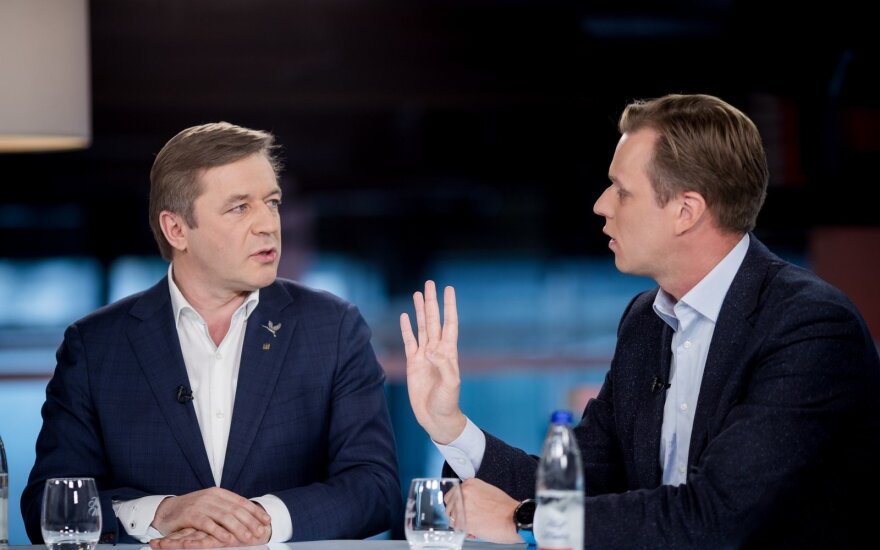 In the second round of the Vilnius mayoral elections, incumbent Mayor Remigijus Šimašius (37,33%) leading his electoral committee Už Vilnių, kuriuo didžiuojamės [Vilnius we are proud of] and the chairman of the Lithuanian Freedom Union Artūras Zuokas (22.7%), who is seeking to retake the office.

Panevėžys Mayor Rytis Mykolas Račkauskas, leading the electoral committee Atsinaujinančiam Panevėžiui [For a Renewing Panevėžys], is also seeking a second term in office and while he obtained the most votes in the first round (28.62%), this was also not enough for a first round victory. Here he will face Povilas Urbšys (18.1%). To note, four years ago R. M. Račkauskas obtained the post of mayor alongside the electoral committee Povilas Urbšys už Sarašą "Kartu" [Povilas Urbšys for the list "Kartu"]. Currently, R. M. Račkauskas is suspended from office pending a corruption investigation.

The second round will feature a number of other clashes and according to "Farmer" leader Ramūnas Karbauskis, most of them are now negotiating with various political powers for support. R. Karbauskis is convinced that the "Farmers" are the best partners because they are reliable and "do not backstab." He spoke of the Conservatives contrarily, describing their support as essentially a sentencing.

Meanwhile the chairman of the Homeland Union – Lithuanian Christian Democrats (TS-LKD) Gabrielius Landsbergis stated that you cannot evaluate Conservative and "Farmer" support equally – in some municipalities he stated it could be valuable, while in others – futile.

That said, Vytautas Magnus University Department of Political Science and Diplomacy dean, professor Šarūnas Liekis states that such political support is more of a political game, which has little influence on voter decisions.

Karbauskis: perhaps only Conservative support can harm, ours – can't

LVŽS leader R. Karbauskis is convinced that numerous candidates will negotiate for "Farmer" support and added that negotiations are already underway, just not visible for voters. He noted that likely everyone would seek the party's support and only where the "Farmers" are particularly strong they may not due to competition with the party.

The politician remarked that the impact of support varies by region, admitting that in, for example, Vilnius the benefit could be lower. At the same time, he emphasised that, "We are not such that support would be harmful. In some cases, when the Conservatives provide support for someone, it does, but in our case this does not apply. I do not believe there are such people, who would flee from us," R. Karbauskis assured, adding that the Conservatives have a "ceiling", which is what could be harmful with their support.

The "Farmer" leader did not deny talks of supporting R. M. Račkauskas in Panevėžys despite the mayor being suspended from office due to a corruption investigation. R. Karbauskis stated that he believes that all the bad things proceeding in the city are due to P. Urbšys, who according to R. Karbauskis, was the one to launch and initially lead the corrupt processes.

"The "Farmers" are a very desirable partner because they are very clear, stable, do not engage in politicking and simply do their work. It is the most stable partner. On the national scale, we can say that the Electoral Action of Poles is a fairly reliable partner because they hold up their word. I believe we will also be able to say the same about the LVŽS. We never play any behind the scenes games and do not backstab," R. Karbauskis assured.

Landsbergis: in some places, support would not be significant

While R. Karbauskis stated that "Farmer" endorsements are beneficial, while the Conservatives' could be harmful, G. Landsbergis responded that he has observed a completely different trend: "Parties that interacted less before are coming to terms to overcome the "Farmers.""

According to the Conservative chairman, the party's branches are now negotiating on potential support and coalitions. "Our branches have been directed to decide, who they want to support and decide on coalitions. In many cities we are holding discussions on potential coalitions. Some are unexpected at the national level," G. Landsbergis spoke.

In the end, when pressed on whose support is more beneficial – the Conservatives' or the "Farmers'", the TS-LKD chairman responded, "In some places one party's would, in others – that of another. In some places – that of neither."

Liekis: a political process that could irk voters

Vytautas Magnus University Department of Political Science and Diplomacy dean, professor Šarūnas Liekis told Delf that whether support will be beneficial or not can be decided only by looking at specific situations, however he added that it is much more important for the political powers themselves and not voters. As for "Farmer" claims about their support being desired, he describes it as a "psychological crown", which apparently only they themselves need.

"Lacking concrete analysis of the local situation, this statement that we will support someone means very little. Karbauskis' hint that he may support Zuokas... Realistically, such support doesn't mean much when the "Farmers" only obtained 4% in Vilnius and received three mandates. It is not a serious partner for any politician," Š. Liekis stated.

According to the professor, the influence of political support can differ case by case. "It greatly depends on the situation. All the major parties were strongly behind the anti-committee rhetoric, there was a whole wave directed against the committees, however it turns out that the committees were the victors of this whole game," Š. Liekis summarised the results of the municipal council elections. With the results added up, the committees surpassed all parties.

As for whether voters are swayed by their favoured candidate being endorsed by an unappealing political power? "It is clear that the "Farmers" do not have strong branches, while the Social Democrats do. The Social Democrats' support could have significant impact in certain areas. Also that of the Conservatives, who have a loyal electorate. Of course, they have their electoral "ceiling" and similar things, but the parties, which have a strong network and strong branches can have an influence. As for those, who don't – it's just empty promises," Š. Liekis stated, adding, "For some, Landsbergis is authoritative, for others he means nothing."

R. Karbauskis' assertion that most will seek "Farmer" support and not the Conservatives was met with criticism from Š. Liekis. "It is a matter of a psychological crown. He (Ramūnas Karbauskis) imagines that it is necessary for others, that others need "Farmer" support, but in my opinion, in many municipalities, "Farmer" endorsement is not that necessary if the "Farmers" are not a real political power in them. Take Kaunas as an example. You can state that the "Farmers" are supporting Matijošaitis, but they have no real sway in Kaunas. But it is a sort of political matter – support today, tomorrow – not. If Skvernelis or Karbauskis are authoritative to someone – they will have influence," Š. Liekis mused.

According to him, political endorsement could also have a negative impact – it could irk voters.

"There is need for concrete research. Sociologists should take this up. But it was never done. No research was done for the municipal elections. Political powers do not know the real situation. No one invested into these elections, thus no one could predict their results," Š. Liekis stated.

What should be highlighted after this sleepless night for politicians?

Something special should be said on a morning such as this. Indeed, elections, which are the most...