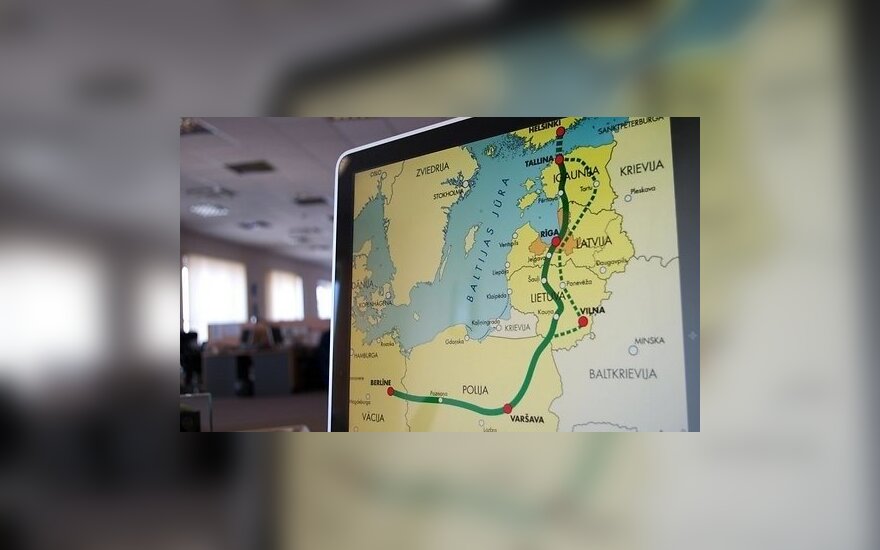 There exists a risk that Lithuania will be unable to secure enough cargo for investment in Rail Baltica to pay off, Kaunas Technology University Economics and Business Department (KTU EVF) professor Vaidas Gaidelys says. The economist points out that Russia is also successfully working toward this end, having built a new terminal next to St. Petersburg and having started to transport especially profitable oil products, something that has already caused losses for Estonia, LRT.lt writes.

On Tuesday the joint Baltic States' company RB Rail announced the competition for the design and maintenance of a new strip of the Rail Baltica from Kaunas to Ramygala. The first competitions for the railway's technical specifications were announced not only in Lithuania in late December, but also in Estonia, for a strip from Pernu to Rapla in the country's north-west.

However while the Baltics are preparing designs, Russia has already taken steps which raise the Baltics States' risks to not obtain sufficient cargo which would ensure that the investment would pay off and the railway be profitable, V. Gaidelys observes.

Rail Baltica is a strategic EU project, the goal of which is to connect East and North Europe, for Lithuania to become part of the united EU railway. Another aim is to compete for Chinese, Belarussian, Russian cargo, however in this regard we have significant competition, V. Gaidelys notes.

"Our primary rivals are the Brest terminal (Belarus) and the Latvians. Our advantage is that we have a good port, however to reload the cargo and take it through the port may not really be justified because it would just increase the logistics costs, they can be taken via the old Russian railways.

Rail Baltica would become relevant when transporting goods from Scandinavian countries, however in this regard there is the risk that Lithuania will be unable to secure enough cargo for the investment to pay off. Of course such strategic infrastructural projects cannot have direct repayment, however it is something to pursue," the economist explained.

According to V. Gaidelys, the planned cargo transfer prospects are overly optimistic: "The problem providing for Rail Baltica as a strategic project is that it is still unclear what cargo could be transported from Scandinavia. There currently is no real cargo, other than paper from Sweden.

Keeping in mind that Russia is actively taking steps to reduce the amount of cargo and to ensure the railway would be unprofitable, such a risk remains. The Russians began a strategic project in parallel, building a terminal near St. Petersburg, through which they began transporting oil products which are some of the most profitable. Due to this the Estonian railways have been faced with losses. As such this project does not have a strong economic basis and I doubt that given current conditions it could even be created.

According to V. Gaidelys, if the goals of Rail Baltica are reached, faster and more ecological transport will be ensured.

"It has been calculated that both in terms of economy and the environment, automobile cargo transport over a distance of more than 300 kilometres is not beneficial, thus the possibility appears that cargo will be taken from Western Europe to Eastern Europe by train. This way cargo transport would become faster and somewhat cheaper, pollution would decrease," he said.

Economist Raimondas Kuodis who has emphasised the necessity of cost and benefit analysis for strategic projects a number of times and during criticisms of its lack in public projects he has mentioned Rail Baltica as well.

Questioning how much pure benefit can be wrought from Rail Baltica, he notes that due to the new railway, new passengers will appear who value greater speed, however those in logistics will not be willing to pay more for one hour faster delivery. And cargo costs, according to the economist, will grow, furthermore the infrastructure will be maintained not through EU, but Lithuanian funding.

The economist takes amusement from the claim that it is foolish to "not take a project which is 85% financed by the EU" and asked what would happen in the following situation: "I give you a truck for 15% of its price, but you have to take it to work for 20 years for your own money."

Russian news media spares the project of no criticism, but state institutions do not take up responding to criticism toward Rail Baltica.

This week a piece appeared on the Russian news agency regnum.ru where it is claimed that Rail Baltica has no real economic basis – no cargo, nor passenger base at any end of the railway, the only purpose for it being to transport military equipment and vehicles, but even in the case of war it would be dubious.

"The hopes that Finland will join the railway is an illusion because the Fins are using "Russian railway" and do not plan to change it to the European standard. Talks of how the rail will transport Chinese goods remains just talk. Even if Chinese goods do reach the Baltics, they would arrive on the wide Russian rail and later would have to be transferred and no-one has clearly stated why this would be more profitable.

The only purpose to Rail Baltica is to transport military equipment. However it is only meaningful in the case of war and if this happened, the railway would be close to the front line and would hardly be beneficial," the text states.

The Ministry of Transport and Communications refuses to respond to media criticism, however it presents a cost benefit analysis for the Rail Baltica project from the audit company Ernst & Young Baltic SIA. It states that the project is financially and economically beneficial, as well as possible to implement.

During the Rail Baltica construction works there will be 13 thousand new jobs created and more than 24 thousand jobs will be created in indirectly related or encouraged industrial areas. It is calculated that the project will save around 400 lives per year in its exploitation period, which equals to on average 30 million euro per year. The project will also reduce CO2 emissions, the benefit of this being calculated at 3 billion euro, as well as reducing pollution, valued at 3.3 billion euro," the cost benefit analysis summary explains.

Amid the increasingly heated discussions in the Baltic states about the financing of the...

Chinese freight shipments via the Baltic countries may become an opportunity for the European standard...