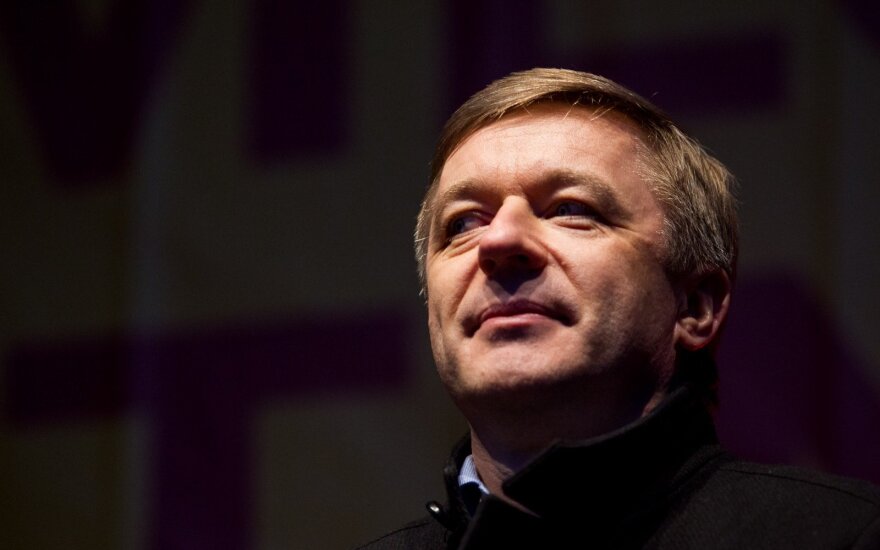 Despite the post-electoral euphoria calming down, the Lithuanian Farmer and Greens Union (LVŽS) retains high ratings – their voters are resistant to the scandals appearing in the public sphere. Political scientists muse that the LVŽS would not be afraid of snap elections, furthermore the party could take the path of impeached president Rolandas Paksas.

R. Paksas, facing fierce criticism, formed an image of being a martyr and retained high ratings for an extended period of time.

"We will win them, that's the truth. (...) After these elections, there would be even more "Farmers" in Seimas. Do you want that?" LVŽS leader Ramūnas Karbauskis spoke at the protest by the Seimas last week, unconcerned by the idea of snap elections.

Related articles
Seimas opposition moves for no-confidence in election chief
Kęstutis Girnius. Did the Seimas cast a challenge to the rule of law?

Indeed, the newest Vilmorus ratings, which were released by Lietuvos Rytas on Saturday, revealed that the LVŽS is right behind the Homeland Union – Lithuanian Christian Democrats (TS-LKD).

"It would certainly not strengthen them, but they would not suffer as much as one could think," Vilnius University Institute of International Relations and Political Science (VU TSPMI) lecturer Ainė Ramonaitė commented on R. Karbauskis statement. At the same time, she noted that R. Karbauskis expectation of potential improvement of positions in Seimas is "exaggerated."

She is not overly surprised by the newest survey data.

"People do not draw from news media directly, it is not that they hear and acknowledge it. The mechanism is more complex: people discuss and interpret the messages in their own environment, sometimes there is even a rejection reaction when there is too much attacking by the media in a time period, people are left with the opinion that perhaps it is in the interest of some sort of groups to attack, criticise, sometimes it backfires," the political scientist explained.

A. Ramonaitė explains that sometimes the impact is unlike what is expected. In general, LVŽS voters have a reservoir of trust, perhaps they look at other things. "But the primary euphoria had long fallen, at one point the "Farmer" ratings had grown greatly, but when the euphoria settled, they declined, perhaps those who were supporting a very popular party, but as we see, the more faithful voters remain," A. Ramonaitė said.

According to the political scientist, in part the "Farmers'" situation is comparable with impeached president R. Paksas', who manufactured for himself the image of an assaulted martyr after his impeachment and made use of it for numerous years.

"It is a very appealing analogy. Of course the "Farmers" may not reach the same level as occurred during R. Paksas' story, but there are similarities," the TSPMI professor said.

High "Farmer" ratings were present in a Spinter Tyrimai survey commissioned by Delfi on 19-27 February.

Making use of the Polish example

Meanwhile political scientist Šarūnas Liekis is convinced that most of the political elite fails to grasp the situation adequately, which leads to low quality sociological surveys.

"Sociological surveys in Lithuania are garbage and just the formation of political opinion. Take the US state of California with 40 million people – the maximum error margin is half a percent. Surveys are not performed at a high standard in Lithuania, too little is invested in them, dynamics are missed," Vytautas Magnus University Political Science and Diplomacy Department dean professor Š. Liekis concluded.

According to him, this is due low funding, superficial survey work and methodological problems. Furthermore, most citizens now lack landline phones, thus certain segments of the public are no longer reachable.

Š. Liekis is not surprised by the "Farmer" ratings not declining.

"If you look into a few of their reforms, you see that it cannot be done without money. They are oriented toward the common good – increase benefits, give grants, all following the trend in Poland – this immediately raises popularity. People look at things very simply – what did a previous government, say that of Andrius Kubilius, give? They took, but gave nothing. If you constantly contribute to state visibility, the state will increasingly contribute to human capital and popularity will remain. We see that just fine in Poland," the political scientist said.

According to Š. Liekis, there have long been talks of certain high ideas in Lithuania, matters such as banks, capital concentration. As such, he says, certain parties are stuck in the Facebook bubble and remain unaware, what exactly the public lives with.

"Poor survey making contributes to this. It is a completely distorted image. Most of the political elite fails to adequately grasp the situation – not their party, not the system in general," the professor stated.

According to Š. Liekis, one can agree that two Lithuanias exist – for example Vilnius and Kaunas versus the rest of Lithuania. However, he states, there is another – Facebook Lithuania. People in this bubble encourage one another, communicate, "like". However the Facebook sphere is by far not representative of public trends.

"For example I am familiar with the Kaunas community, it is currently completely in favour of the "Farmers", there is no hope for the Conservatives in Kaunas. Because realistically, the Conservatives gave Kaunas nothing, they only misgoverned it. During the entire time when Kaunas residents voted for the Conservatives, the latter gave nothing to Kaunas. You cannot last on just patriotic slogans," Š. Liekis spoke.

Members of the opposition in the Lithuanian parliament are initiating a no-confidence vote against...

Kęstutis Girnius. Did the Seimas cast a challenge to the rule of law?