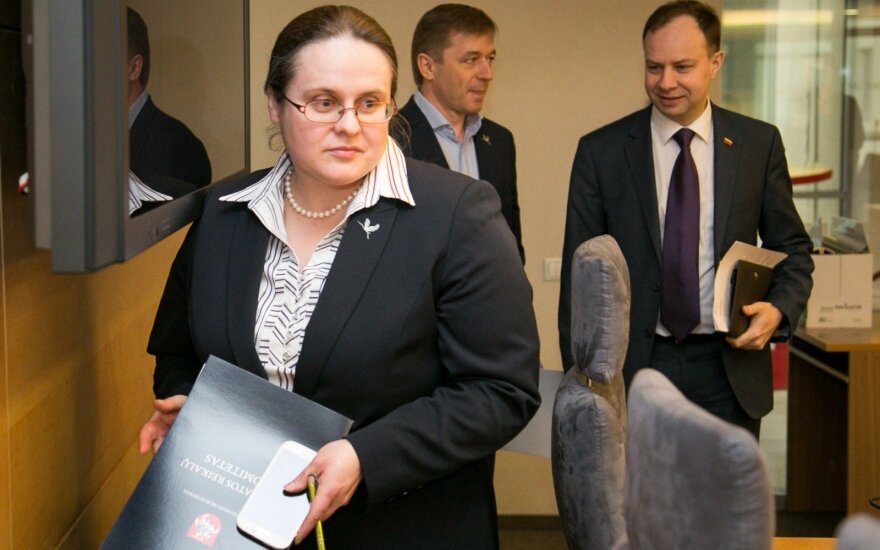 Individuals opposing the Istanbul Convention which denounces violence against women have found shelter in Seimas under the wing of “Farmer” representative Agnė Širinskienė.

The Institute of Free Society, led by A. Širinskienė‘s assistant Kristina Zamarytė-Sakavičienė, has been urging to not ratify the important document and is thus attempting to create an illusion that the public is against the convention which obstructs violence against women.

An international conference is being held in Seimas on Friday where both the supporters and detractors of the Istanbul Convention have been invited for the first time. The meeting will be attended by representatives of the European Council Group of Experts on Action against Violence against Women and Domestic Violence (GREVIO), it is planned to discuss the goals of the Istanbul Convention and the potential legal and social impacts on the Lithuanian public if it were ratified.

The Istanbul Convention was signed by Minister of Foreign Affairs Linas Linkevičius in June 2013, however the Seimas has yet to ratify it. The contentious document establishes the notion that violence against women and domestic abuse are breaches of human rights, thus they must be prevented, victims should be protected and offenders must be persecuted.

The convention’s detractors see a number of threats within the convention. Primarily it is linked with the aim of establishing social gender categories. Supposedly under the cover of this noble struggle with violence against women, there are efforts to integrate genderism ideology into the Lithuanian legal system, which the detractors feel denies the reality of biological male and female distinctiveness.

This opinion is featured in the statement distributed several days prior to the conference, urging the President, Seimas and cabinet to not ratify the Istanbul Convention because this would supposedly bring Lithuania more harm than good.

It accents concern over potential “social gender” legalisation, also claiming that public organisations are opposed with the convention’s stance that violence against women occurs because they are women.

“The Istanbul Convention is based on a dangerous paradigm of one gender’s individuals holding hatred against the other gender. Scientific research shows that violence is not related with gender, being male or female. For both males and females violence is a learnt behaviour and some women are no less capable of violence than some men. Furthermore the means of abuse prevention should serve to reconcile the two parties, strengthen and harmonise the family, rather than encouraging gender antagonism,” the statement claims.

Violence against women in the European Union (European Council data)

1 of 3 women older than 15 in the EU have experienced physical and (or) sexual abuse;

More than half (55%) of women have experienced sexual harassment;

1 of 3 women have experienced psychological violence from their partner;

1 of 3 women experienced physical or sexual violence from adults in childhood.

The public statement was signed by a group of public organisations: Confederation of NGO’s for Children, National Family and Parents’ Association, Lithuanian Family Centre, Free Society Institute, Lithuanian Parents’ Forum and several others.

The coordinating institution was indicated as being the Free Society Institute, headed by K. Zamarytė-Sakavičienė, who is also the assistant of Lithuanian Farmer and Greens Union member, Seimas Healthcare Committee chairwoman A. Širinskienė.

A potential conflict of interest observed

“We hope the Seimas will not agree to ratify the Istanbul Convention based on current circumstances. We have presented arguments a number of times, why the convention should not be ratified because in our opinion, as in that of the signatories, ratification would bring more harm than benefit for Lithuania. And it would have little real impact on combatting violence against women,” K. Zamarytė-Sakavičienė told Delfi, noting that she used to work in Seimas, but has since left for maternity leave. The request for maternity leave was only approved on June 9 however.

When asked if the public activities did not clash with work in Seimas, K. Zamarytė-Sakavičienė denied it, stressing that numerous heads of public organisations work as assistants for members of Seimas as normal practice.

The chairman of the Seimas Human Rights Committee, which coordinated preparations for the international conference in Seimas, A. Širinskienė‘s Seimas group colleague Valerijus Simulikas has told Delfi he was unaware that the detractors of the Istanbul Convention are united under the banner of an institution headed by A. Širinskienė’s assistant. He admitted that this could potentially be viewed as a conflict of interests.

According to Simulikas, Zamarytė-Sakavičienė should have recused herself from proceedings in this case. He notes that similar cases could be observed during the discussions on legislation of prevention of violence against children. Simulikas summarised that being an EU member state, involved individuals should seek solutions and compromise instead of pushing forth exclusively their own agenda.

Assures she does not coordinate her positions with her assistant

During an interview with Delfi, member of Seimas A. Širinskienė explained that she employed K. Zamarytė-Sakavičienė as an excellent professional. The head of the Free Society Institute has also worked as a lecturer at the Mykolas Romeris University Law Philosophy and History Department while A. Širinskienė worked as its docent. She has also worked at the State Medicament Control Service.

The member of Seimas lauded her assistant’s drive to participate in public discourse as a mother of three while also working in Seimas. Širinskienė stressed that she does not get involved with her assistant’s activities and is most concerned that she would prepare the projects necessary in Seimas.

A. Širinskienė also expressed a negative view of the Istanbul Convention, citing that numerous points of the convention are already present in national legislature and also pointed to the potential issue regarding the notion of social gender, which she believes would antagonise the public.

The head of the Lithuanian Farmer and Greens Union (LVŽS) Ramūnas Karbauskis has also expressed negative views of the convention, as early as last August, in the midst of the electoral campaign to Seimas. He released a public statement where he spoke for reducing domestic abuse and violence, but also expressed concern over the notion of social gender, which he claimed causes “real danger” to the family policy his party supports. It is of note that this statement was released following a visit by Prime Minister Saulius Skvernelis and human rights advocate Dovilė Šakalienė, who both ran for Seimas with the LVŽS, at the headquarters of the charity and support foundation Frida, where S. Skvernelis was photographed holding a poster which expresses support for the Istanbul Convention.

L. Linkevičius: should have been ratified earlier

Minister of Foreign Affairs L. Linkevičius, who signed the Istanbul Convention four years ago, said he believes the document should have been ratified by Lithuania much earlier.

“There was, however, intention to hold a detailed discussion with the public, with those who hold doubts and questions. I hope the process will not take overly long – we will answer questions at the international conference for those who need answers, but it is time for us to take action. This convention is an important element of our legislature. The doubts that are being raised are definitely inadequate for the situation. The convention is about nothing other than domestic violence and abuse against women and girls. Who could ever say this is not relevant in Lithuania? As such I am rather surprised by those who hold doubts, but I believe everyone has the right to receive answers,” he said.

The minister notes he is surprised by the detractors’ emphasis on the notion of social gender and it’s impact on Lithuania. He explains that the text does not even contain the word gender and is not at all concerned with such issues. Linkevičius stresses that the convention would be enacted to the extents that are permitted within the Constitution and would not clash with any of the Constitution’s precepts or require far reaching changes.