LT Daily, media brief
aA
Based on the implementation of Russian deterrence, a tank and AFV brigade from the United States has already reached Poland from where it will proceed to Lithuania. Despite Russian protests, this year a NATO battalion led by the German armed forces will be deployed in Lithuania. 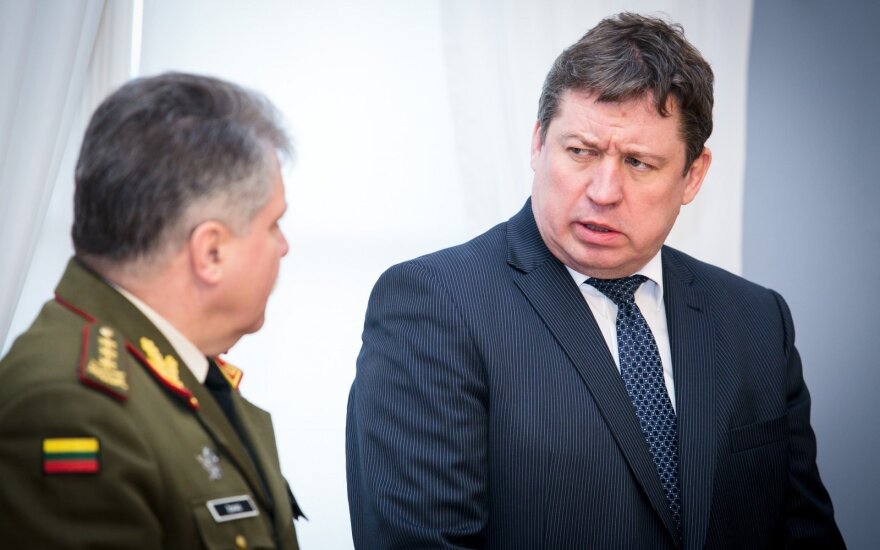 Debates will begin in Lithuania this week on establishing universal military service, with discussions of obligatory military training at school and higher education institutions. The show Savaitė features an interview with Minister of National Defence Raimundas Karoblis, LRT.lt reported.

- Minister, prior to being appointed to your post, you worked in the Ministry of Foreign Affairs for a long time, thus firstly I would like to ask about the Seimas Speaker’s meetings with the Russian and Belarussian ambassadors. Do you think now is the time for such dialogues?

The situation is likely such that it is unlikely that big changes would occur in relations with Russia. Nevertheless, big or small, dialogue exists.

- Minister, if you had to meet with the Russian Minister of Defence, what would you speak about?

No, that’s a whole different question. One thing is when the Seimas Speaker meets with the Russian or Belarussian ambassador who represent their country here and are there to maintain contact, even if minor; another thing is meetings at the minister level. Especially speaking of meetings between defence ministers, such meetings would not happen. The geopolitical circumstances do not permit it.

The best format to currently speak with Russia is NATO, through our system of collective defence, something that is currently proceeding. It is the best option in terms of defence matters, as for closer bilateral relations with Russia, we do not believe they are beneficial.

- This week we had the Snow Meeting, where among others, many former and current NATO officers and politics experts participated. From those meetings, how much did you get to participate, what situation did you observe? Was it truly tense and worrying or can we take a breath in relief?

Well, we should not relax. An unknown factor remains and actions from the Russian side are hard to predict. What happened yesterday, when bad Russian practice in Syria, including bombings of civilian officers, shows that it is a difficult country to predict. It is challenge number on. Everyone understands this and it continues. Another challenge, of course, is terrorism.

Beyond that there’s other things – the new US administration, it getting up to speed, the modification of certain priorities, hopefully not strategy, but tactics, something we here in Europe will have to adjust to. And of course the unknown and sensitive things are the elections in Germany, France, Holland, the beginning of the Brexit negotiations. We have a fairly bad sandwich in 2017 and will all have to work together. I am speaking not just of Lithuania, but all of Europe and in the end all of the Western world.

- You mentioned there were talks of what the new US administration’s strategy could be, perhaps tactical changes. Were there any predictions on strategic shifts in the Snow Meeting?

There were certain discussions, but we should not discuss doubts, but focus on ensuring strategic changes are not made and that NATO and the USA would remain leaders.

- This week discussions on conscription arose. The Prime Minister’s and your own opinions differed because the PM says that in 2019 universal conscription should be called in Lithuania, with the head of the military stating that this should be prepared for, while not specifying a date. Meanwhile you go further in time, stating that perhaps it will not be this government that will establish universal conscription. So let me ask, which one should we trust?

I would say the deadlines, whether it be 2020, that is right before the elections, or somewhat later, it will depend on whether we will manage to evaluate and weigh certain things. If we are prepared, the decision will be made, if not all the options and analyses will be left to the next government. 2019 is definitely too early.

- There are discussions of the date, but none on females. Could they be called to military service because we are currently only talking of males?

For now we are only discussing males. Of course it is laudable if females volunteer. Both among the conscripts, where there are some right now, and in the volunteer forces as well. This path is open to them and there is definitely widespread interest that they would be as well.

- But speaking of universal conscription…

… Is early. Let us begin from the men.

- Then let us talk of military preparedness teaching in schools and higher education institutions. The Peasant and Greens leader says that such a thing needs to return.

Firstly I think we need to strengthen patriotic teaching. But if we are to talk of obligatory training, it should definitely differ from Soviet times. This should not be training to disassemble a rifle, formation training and shooting practice, we should be speaking of a less restrictive form. Military training, whether it be in school or higher education, it should not be the preparation of a full soldier.
Full training is possible only in the military or the national defence system. Training troops, whether it be conscripts or professionals, or volunteers – even at war Lithuania does not need cannon fodder. Everyone who fights should be adequately trained and adequacy is through military structures, not obligatory school training.

- Thank you, minister, for the discussion.

Lithuania to get more US troops – US General

The US will send more troops to Lithuania as it starts it preparations to step up its presence and...

Interview with heads of armed forces on universal conscription and more