DELFI
aA
The new cabinet chancellor Milda Dargužaitė says she has come to reform state governance and is aware that she can expect much resistance. During a Tuesday Delfi conference on December 20, M. Dargužaitė spoke about reducing staff numbers and raising wages in the state sector without requiring extra funding. 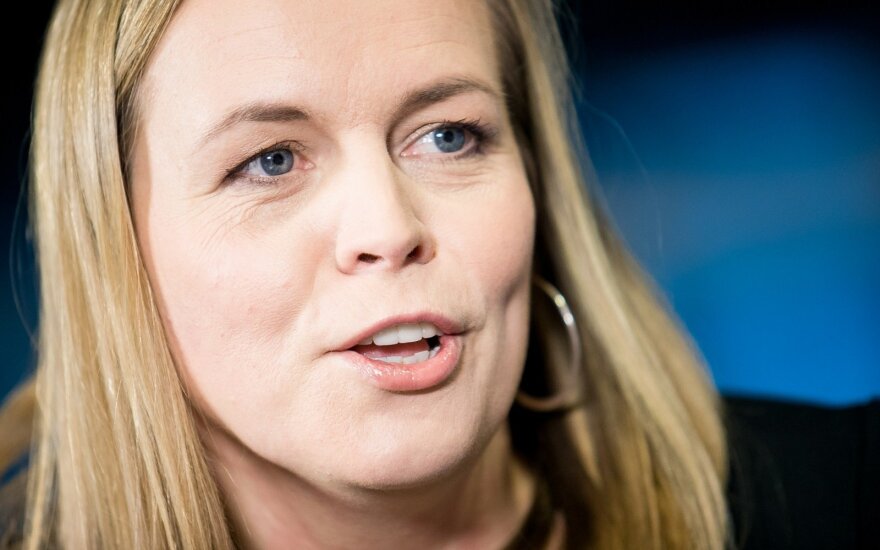 “The absolute majority work very ineffectively, starting with the ministries, even the chancellery itself, ending with various state owned enterprises – we have seen the examples of Lietuvos Geležinkeliai (Lithuanian Railways), how much need there is to make work more effective and transparent, at the same time giving more returns for tax payers from state owned companies,” M. Dargužaitė described the situation in the public sector.

She says she feels total support from Prime Minister Saulius Skvernelis regarding the topic. “Of course there will be much dissent. But from my preliminary talks with employees, who have tried to start reforms, one of the main reasons they mentioned was the lack of political support. Right now the situation is different because political support is certainly there,” the chancellor assured that reforms will succeed.

Having worked in the post for five days now, M. Dargužaitė said she has had an opportunity to get to know roughly two thirds of the chancellery’s staff. “There are some excellent people, specialists of their topic areas, who have a vast accumulation of experience. The question is how to use it, so that they are used where they are needed. On the other hand there is much inefficiency. <…> All the departments know what they are doing, the question is whether it is necessary to do it,” M. Dargužaitė explained.

An example she provided: on receiving any inquiry, a mechanism turns on in the chancellery – the letter is analysed and delegated until, after a long round trip, it finally reaches the chancellor‘s table. Then she respectively delegates the matter to the relevant institution.

According to M. Dargužaitė, the chancellor will no longer be only a connector, an inter-institutional coordinator, but also the implementer of centralized reform. “The chancellery will become the place where all governance reforms and inter-institutional questions will be directed,” she promised.

Changes for civil servants in mind

“It is hard to state specific numbers, but I would most likely agree with N. Mačiulis. I believe that it is important to look at not only the structure, but also delve into some of the specialties. We have observed that there are too many leaders in the ministries, this means that everyone is paid wages that are small compared to the private sector. The wages could be equal, if we had fewer leaders and more new people, with faster turnover of people. <…> There is much room for optimization. I cannot state specific numbers, but there is definitely room to raise wages and reduce staffing without increasing the budget, quite the contrary, it will be possible to reduce it,” explained M. Dargužaitė.

“Newly appointed staff in state service have to take a general test and language exam. Why are these requirements not applied to those already in state service?” asked Gražina, a member of the readership.

“I definitely want to review the state service law, so that there would be no discrimination for either veteran staff or new hires and to review what criteria those employees are chosen, promoted or left in office based on. I definitely have no excuse for why it should be so, I can only agree with the sentiment that it needs to change,” answered M. Dargužaitė.

“Firstly – raising state sector efficiency is a matter that involves a number of topics, starting from the effective management of property. At the moment the state owns who knows how much property between all the ministries, their subordinate institutions, not to speak of municipalities. This property is definitely used inefficiently,” the chancellor named initial tasks.

As an example she presented the cabinet building, just for heating the soviet era building with massive corridors and spaces, it is necessary to spend inordinate amounts of funding. Each employee is allocated more square meters than in private companies. “We have to learn to consider that we are spending money which is tax payer’s money and there is no reason to waste the money this way, sitting in massive buildings, when you could make it more effective,” explained M. Dargužaitė.

The chancellor says that a good way to make work more effective would be to move all the ministries into one building, something discussed by “Peasant” leaders already. Here, she explains, service centres could be created, they could for example cater to specifically information technologies. Consolidation would reduce costs.

Furthermore M. Dargužaitė said that it would be more effective not just in terms of saving, but also in terms of labour efficiency – when making decisions, there would be less need for cross institutional mailing.

“I definitely would not have taken this position had it just been for maintaining the bureaucracy. I...