BNS
aA
Leaders of the Crimean Tatar parliament on Monday called on the West not to recognize Russia's upcoming presidential elections and to boycott this summer's FIFA World Cup in Russia. 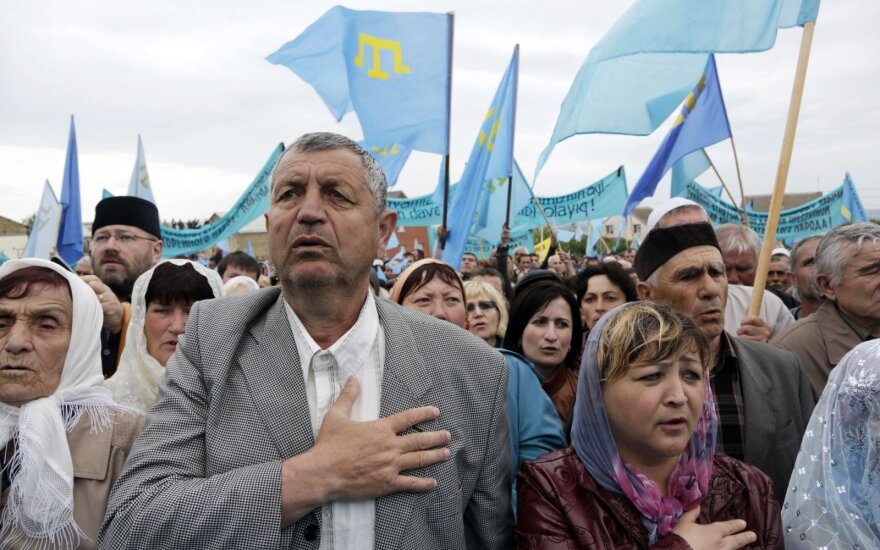 Akhtem Chiygoz and Ilmi Umerov, vice-speakers of the Mejlis, urged the European community "to step up their engagement and pressure on the aggressor" in an effort to preserve the territorial integrity of Ukraine by peaceful means.

"I'm convinced that, first of all, we should not encourage Russia's image projects. The message this gang communicates, first of all, to their people is that of impunity, permissiveness and influence all over the world," Chiygoz told reporters in Vilnius.

"This means that there should be no place for this bandit at European institutions. His so-called elections, which I call 'election day', should not be recognized either by the European community or the global community. We have to show him his place in the cell, rather than in the civilized world," he said.

The Crimean Tatar leader also called on the global community to boycott the FIFA World Cup which Russia will be hosting this summer.

"We should not encourage image projects related, for example, to sports events, such as the upcoming World Cup," Chiygoz said.

"How can the European community, European nations and people, knowing that thousands of innocent children and women are dying in a neighboring European country, in Ukraine, travel to Russia, which is responsible for these crimes, and take part in sports events?" he asked rhetorically.

The Mejlis vice-speaker thanked Lithuania for supporting Ukraine and almost 300,000 Crimean Tatars in the Russia-Ukraine conflict.

Since the 2014 annexation of Crimea, the peninsula's Tatar population have faced repressions, mass abductions, displacement, the elimination of the Ukrainian and Tatar languages from schools, and restrictions on freedom of the press, the Crimean Tatar leaders said at the news conference.

According to them, local Tatars currently have no independent mass media outlets.

In Crimea, there are currently around 100 political prisoners convicted for not recognizing the "territorial integrity of Russia" and for organizing mass protests and other activities, they said.

Russia is responsible for the worsening situation of the Tatar community in Crimea , Lithuania's...