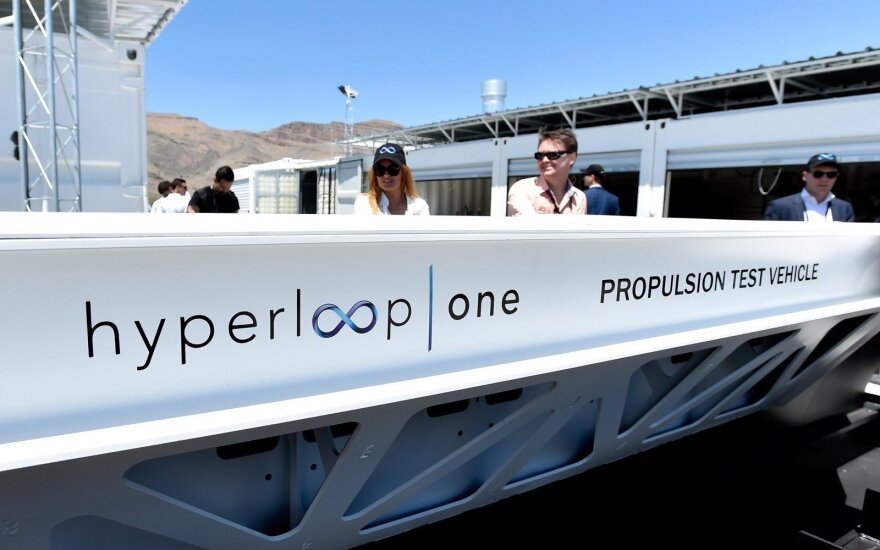 A trip from Vilnius to Klaipėda would take about 20 minutes if the Hyperloop technology was successfully installed. This is only an attempt vehicle, by which special passenger capsules allow travel of 1 000 km / h by pipes.

"Travel should be quite cost-effective, cheaper and easier than the plane. The meeting in the first half of the day in Helsinki, in the second half of the day - in Stockholm, dinner at home in Vilnius would be completely realistic, "- the businessman and public figure Vladas Lašas told the LRT radio.

Journey with „Hyperloop "vehicle, which is sometimes called a supersonic train, would look like this: together with the other passengers to enter the carbon fiber capsule, the capsule moves at approximately 1 000 km / h, on 3 m diameter pipe. Pipe system is connecting the different cities and is built above the ground.

"It should be a vehicle that in an airless space, created by the pipe, caould move on a magnetic cushion for the magnetic pull," - said the Vilnius Gediminas Technical University of Railway Transport Department Head Gediminas Vaičiūnas.

Transport engineers has been discussing a similar method for a long time, but it, like Hyperloop system, was first introduced a few years ago, by "Tesla" Executive Director Elon Musk.

Then resounding in a very innovative idea, according to a businessman and public figure V. Lašas significantly progressed.

"This field has a large number of talented, skilled and professional people, a few companies are intensively developing this technology. Some of those systems are in operation and are demonstrated but we are still waiting for the demonstration of the whole system.

The company " Hyperloop One” , is the technology leader, hopes that now still under construction 0.5 km long line to show running within a few months", - said V. Lašas.

The company "Hyperloop One Nevada” built the first" Hyperloop "system to try on a distance. These companies’ goals in the US are extremely high. The newly introduced plan - Vision America - offers 11 possible paths, Hyperloop system will connect 35 cities in the country. In these ideas is also interested the US President Donald Trump.

One of the most difficult tasks - to maintain the vacuum

Public figure V. Lašas argues that although it is difficult to predict when the "Hyperloop system will be started to install widely, associated works are being carried out rapidly.

"On the one hand, the company's managers and engineers say that they would like to do everything so well that it is a reliable and secure system, so they try not to set an exact date when it will be presented and tested. On the other hand, many now manage to do things more quickly than would be expected. This is happening in so-called Silicon Valley at a start-up pace, when the company is growing and has a great in the field of professional support, "- notes V. Lašas.

According to him, the practical "Hyperloop” system implementation difficulties may arise due to the slow development of the legal framework, in addition to innovative vehicle makers for other big challenges:" In the development of a test system, what you first need to do is to make it reliable, safe, easy to use, economically attractive and efficient."

According to the Faculty of Associate Professor G. Vaičiūnas, one of the most difficult challenges facing engineers is to maintain the vacuum, because the simulations showed that the pipe is not an absolute vacuum and, approaching the speed of sound (of 1 000 km / h), still appears to get air resistance.

"The question is whether this problem will be solved or not, or will be able to ensure the vacuum, or it will be so reliable that does not have any curiosities or crashes the system won’t lose hermetic. These things are not yet so securely checked, "- observes G. Vaičiūnas.

Although now it is difficult to accurately calculate the "Hyperloop” system installation cost, this idea interests not only the Americans. According to V. Lašas, Finns are very interested as well.
"It's a great opportunity for dynamic small countries such as Lithuania or Finland. Once Finland managed to develop the first mobile phone ecosystem - then in a small town Salo 5 thousand Nokia engineers worked, which then then was taken over by Microsoft. Now Salo city, without the companies is looking for new opportunities and challenges, and is very energetically doing that. They offer to make Salo city a technology centres of excellence in the preparation of the engineer, who designed and develop those systems, - said the businessman.

According to him, Lithuanian engineers and other professionals can contribute to the Scandinavian intent to develop and improve the future of the vehicle.

Although G. Vaičiūnas very cautiously predicts "Hyperloop" for the future, however, considering how the installation of this vehicle may replace the use of other measures, "probably air transport would suffer a little, because there is already contemplation about speeds that are close to the speed of sound. Rail transport, I would try to guess would suffer, because in the Baltic, Eastern European countries, the railway mission is to carry heavy loads and in large quantities."

Innovative transport, the associate professor thinks, could create competition in the high-speed passenger trains, car transport, and result in changes in these markets.

And now let’s dare to boldly forecast. Future day route with Hyperloop "vehicle is played out by the public figure V. Lašas: "Traveling should be quite cost-effective, less expensive and simpler than air travel. A meeting in the first half of the day in Helsinki, in the second half of the day - in Stockholm, and dinner at home in Vilnius can be completely realistic and convenient. This is - a great example of the new technology that is the key to a purposeful life."

Lithuania and the other Baltic countries could join Finland's initiative to introduce the Hyperloop ultra-speed train concept developed by the US startup Hyperloop One in the transportation system, Valdas Lašas, a Lithuanian businessman, says.

"The new high-speed transport concept proposed by Musk a few years ago has already turned into a concrete mode of transportation that is being developed by technology leaders," the businessman told BNS.

According to Lašas, Finland is taking the lead to attract these technologies, which opens a good opportunity for the Baltic countries to join in. Also, it could become a continuation of Rail Baltica.

"We could regard this as a follow-up and further development of the Rail Baltica initiative. We should initiate a political-level discussion with the Finns and the EU. The Baltic partnership in the Rail Baltica project is a big advantage," the businessman said.

"Hyperloop is more designed for something that needs high speeds. So, this technology would have a higher impact on short-distance aviation rather than on railways," he said.

"The technology is very interesting and I think promising. A model was proposed that the innovative railway, which its authors describe as cheaper than the standard railway, could exist as an additional line next to Rail Baltica. (…) We have agreed that Lithuania will keep its interest, a study will be conducted to show how the railway would look like in the region and what it would take for it to come here," Masiulis said after meeting with representatives of Hyperloop One on Friday.

In his words, it is still too early to speak about the cost of Lithuania's participation in the Hyperloop development project.

"We are talking about revolution in the field of transport, therefore, we should first of all look into all possibilities and then discuss implementation. (…) I see such line connecting Lithuania with Europe, we could travel north to Tallinn or Helsinki," said the minister.

After the meeting with Lithuanian ministers of transport and economy, Hyperloop One vice-president Alan James said that building the new-generation road would cost half of the price of the usual high-speed railway line. In his words, an agreement has been reached with officials of the Lithuanian and Estonian governments to prepare a study into construction of Hyperloop next to the Rail Baltica track. With the conclusions in place, an address would be made to the European Commission to secure support and funding for the project.

As part of his dream of a traffic-free future, Elon Musk has been talking for a while now about...

The virtual factory of electric elements for US electric car manufacturer Tesla built by Lithuanians...

Laying the foundation for a TESLA gigafactory in Lithuania (1)

A day after the Tesla Motors lithium accumulator factory opened in Nevada, government and business...

PM to meet with his Baltic, Polish counterparts in Tallinn next week

Lithuanian Prime Minister Saulius Skvernelis is to meet with the heads of government of Latvia,...