the Lithuania Tribune, LRT
aA
Protests have sprung up across a number of countries against the actions of Barnevernet, the Norwegian children's welfare service that has removed numerous children from migrant families in Norway. Last Thursday, one such protest sprang up in front of the Norwegian embassy in Vilnius but Linas Linkevičius, the Lithuanian Minister of Foreign Affairs, said “only a legal path, not populist protests and rallies, can be used to negotiate with Norway for the children that were taken from those Lithuanians”. 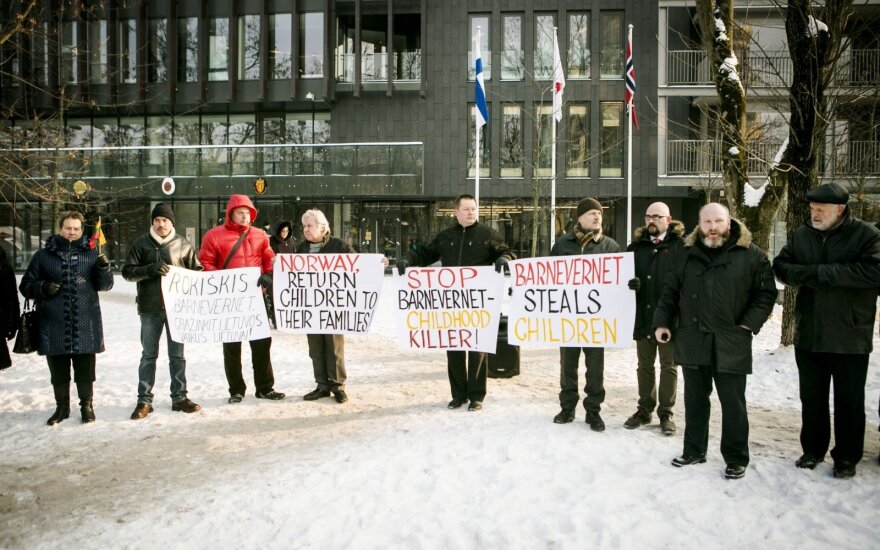 The minister said there have been a range of negotiations with the Norwegian government over the past 3 years for bilateral agreements or other ways to clarify why Lithuanian families living in Norway lost their children and how they could be returned to the country's citizens.

“The fact that Norway has decided to ratify, probably this year, the Hague Convention on Parental Responsibility and Protection of Children from 1996, is a big step forward. In addition, guidelines have finally appeared for what to do if Barnevernet has to deal with children in foreigners' families. I think that those guidelines appeared for a reason. Our approaches to the Norwegians to open up contributed to this. On the other hand, every child's situation must be evaluated individually, not at the populist rallies that have begun springing up all over the world,” said Linkevičius.

Media reports about five or six children that had been taken from Lithuanian families in Norway over the past few months had appeared in the press, but Linkevičius said he had no information about these cases. He underscored that the statistics for children taken from Lithuanians was not significant: “We only have the information we get through our embassy, because Norwegian institutions are not obligated to share this information with us. We find out about them only when the parents themselves notify the embassy. I'm sorry to remind you of it, but we have about 10,000 children without caretakers in our own country that we should be worried about. Instead of complaining about a truly democratic country like Norway, we should open our eyes to the state of children's rights in our own country.”

Grandmother without hope of seeing her grandson again

Passions in Lithuania have been inflamed by the story of Gražina Leščinskienė, a Lithuanian migrant in Norway whose five-year-old son Gabrielius was taken away by Barnevernet.

Since Norway's childcare service is not allowed to share details of the case, discussions in Lithuania have been dominated by the family's side of the story.

The boy's grandmother, Regina Stašienė, participated in the protest in front of the Norwegian embassy in Vilnius. She had tried to gain custody of Gabrielius, but said that he was already with his third foster family: “At first, he was put in a family with two young women. Then, he lived in some farmer's house, but we don't know where he is now. My daughter is no longer given any information about the boy because she was noticed driving not far from that farmer's lands. However, that could've been a total coincidence, because she cleans Norwegians' homes and drives around to various locations.”

After Barnevernet took interest into Leščinskienė's family, the woman's brother tried to take the boy from Norway to Lithuania, but was caught by Swedish authorities. As a result, neither his mother nor other family members have been allowed to see him, Stašienė says.

“I will probably never get to see my grandson again,” Stašienė said with tears in her eyes. She denied that there had been alcohol abuse at her daughter's home in Norway or that Gabrielius had received insufficient care and attention from his mother.

Leščinskienė has lost all her appeals against the decision to date after her brother secretly tried to bring Gabrielius home to Lithuania. He was arrested in Sweden. Gabrielius was returned to Norway, and the man had to return home alone.

Media have reported that Barnevernet's sixth level, or the second highest level of security available, is currently being used for Gabrielius to prevent his relatives' possible attempts to kidnap the boy from the foster family. The seventh, and highest, level would involve changing the boy's identity.

Leščinskienė is currently awaiting the ruling of her final appeal in an attempt to regain her parental rights.

Stasys Šedbaras, the deputy chair of the Seimas (parliament) Committee on Legal Affairs, is convinced that representatives of the Lithuanian government should be more actively engaged in talks with Norway's institutions: “The ministers of foreign affairs and social security should have more active bilateral relationships so we could sign certain intergovernmental agreements, defend our citizens and receive information about children that have been taken [from their families]. If those children really must be taken from those parents, maybe they can grow up in Lithuania rather than in another country?”

The MP also believes that Norway should be reminded about the cases of Lithuanian children at every opportunity. The friendly relationship between Norway and Lithuania could be used to further this end, because the two countries work together on a wide array of issues.

On the other hand, Šedbaras said, Norwegians couldn't have helped but noticed the terrible events over the last few months which highlighted the problems of children's rights in Lithuania, like when a father threw his children into a well: “It can't be ruled out that the Norwegians are watching what's happening in the field of childcare in Lithuania. Unfortunately, we cannot tell them that they should return our young citizens and that we'll take care of them. We have a lot of work to do.”

Still, Šedbaras said it was disappointing that Norway had not allowed Gabrielius even a brief meting with his mother. He also believes that the boy's passage from one caretaker to another might have consequences later in his life: “It's hard to imagine what's going on in his head, and it's hard to imagine what will happen when he grows up angry about his childhood. Cases like this can breed anger and thoughts of revenge, and you get people like the killer in Kražiai.“

New laws will be proposed

Kęstutis Daukšys, the head of the Seimas' Labour Party group, believes that the Lithuanian government should do everything it can to ensure that Lithuanian children be transferred from any foreign country to family members or custodians in Lithuania: “This problem shouldn't be dealt with in Norway or elsewhere, it should be solved here.

"I don't think that all Lithuanians, living on Norway or elsewhere, are holy. Perhaps the Norwegians have a reason for taking Lithuanians' children, if they can't manage to raise them as their laws require. However, in such cases, those children must be returned to Lithuania, and for that to happen, we must take care of them ourselves. They are Lithuanians and they must grow up in their own cultural environment. The government and the Seimas should work on this more actively. If the government won't find a way, we will pass the required laws.”

According to Daukšys, the Seimas has already supported a legal proposal that would allow the Lithuanian Child Rights Protection And Adoption Service to care for Lithuanian children in other countries.

On Thursday, a protest held in front of the Norwegian embassy in Vilnius drew attention to what...