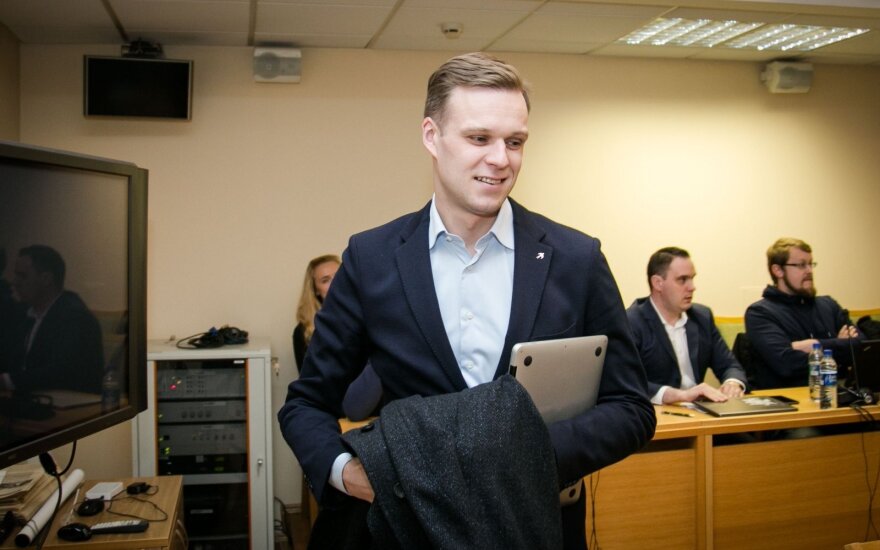 “The party presidium came to consensus that it will adhere to previously expressed positions and we await the next step from the Peasant Greens,” Homeland Union – Lithuanian Christian Democrat (TS-LKD) Chairman Gabrielius Landsbergis said after the meeting.

“If the negotiations with the Social Democrats fail, the Homeland Union is a constructive political force, which is prepared to return to the negotiating table,” he said.

The TS-LKD announced earlier that it will not negotiate with the “Peasants” regarding forming a coalition government if they perform parallel negotiations with the Social Democrats. They also demanded that those signing the coalition agreement would be investigated by the special services.
The LVŽS is currently negotiating with the Lithuanian Social Democrat party.

While a part of the TS-LKD presidium was in favour of the Conservatives negotiating on forming a coalition, the declaration was made under general consensus.

“Such sentiment existed, but the sort of renegades that were brought up in the media do not exist,” said Landsbergis.

The TS-LKD Honorary Chairman Vytautas Landsbergis also participated in the meeting and described the different Conservative positions on being in the opposition or in government as overreacting. “There was a degree of overreacting. Of course the situation changed, people were planning their lives otherwise,” he said. According to V. Landsbergis, the Conservatives should do some serious work in the opposition.

“Normally you have to work every day, proposing legislation, forming proposals on various laws and acts that are being discussed in Seimas, you have to make decisions, have to have a unified position, speak in the name of a unified opposition. Everyone has to learn that some of us are young and there are many of the younger generation are among the majority, we can help them learn, what being in the parliament is,” V. Landsbergis explained to journalists.

His grandson, now in charge of the party, admitted having received criticism from his colleagues, but he did not specify what for. “Always, always, how else. Criticising the Landsbergis family is acceptable in Lithuanian society,” quipped G. Landsbergis.

He stated that one of his mistakes was trusting the LVŽS too much. “Truth be told, I kept it up for a very long time, up to my meeting with Saulius Skvernelis (on Friday – BNS). Perhaps the excessive euphoria after the first round results was rushed,” the TS-LKD tried naming his mistakes.

One of the proponents of negotiating with the “Peasants”, Conservative Žygimantas Paviliones stated prior to the meeting that he is in favour of “taking responsibility for the state”. After the meeting he stressed that the discussion gave hope.

“For the first time we had an open, good dialogue. If this continues, we can hope that everything will conclude well,” said Ž. Pavilionis.

Seimas Deputy Speaker Irena Degutienė told journalists she is against a coalition with the “Peasants”.

“I’ve said it time and time again, and I can repeat it once more. This is because of the peasants I know only two people – Rima Baškienė and Ramūnas Karbauskis. As for the rest, who they are I do not know. That’s one thing. Secondly, if we look at social and economic policy, our proposals do not match those of the “Peasants”, it would be rather difficult working together,” she said.

The veteran Conservative member did not hide her dissatisfaction with the LVŽS’ behaviour during the consultations.

“If you want to speak seriously, you have to speak seriously. Firstly party leaders have to talk, our Gabrielius and mister Ramūnas. But such a dialogue did not occur. Furthermore we spoke of change when we entered the elections. If we are immediately proposed to partner with the Social Democrats, where are those changes then? This is yet another deception of the people and some sort of manipulation,” she stressed.

The Seimas elections in October saw TS-LKD earn 31 Seimas mandates. That is two less than the number earned by the party in 2012. The LVŽS secured 56 mandates of 141, while the Social Democrats secured 17.

Landsbergis hinting about renegades in the party and minister posts

A revolt brewing in the conservative camp?