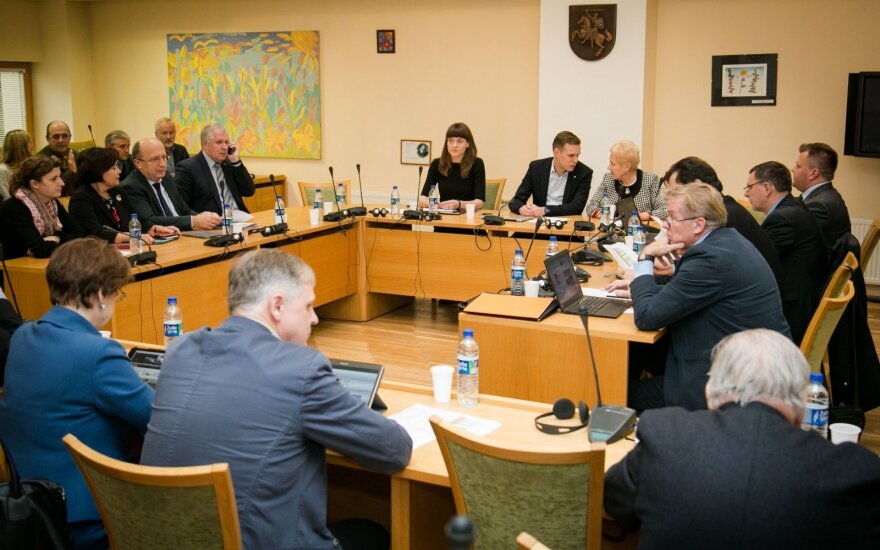 The victor of this year’s election, the Lithuanian Peasant and Greens Union (LVŽS) has begun forming a coalition, it has currently initiated negotiations with the Lithuanian Social Democrat Party to form a new coalition. While a final agreement is not yet in place, it is becoming clear who could take various key posts in Seimas and the various ministries, Alfa.lt reports.

While the “Peasants” negotiate with the Social Democrats, the Conservatives have announced they will stay back. After a crushing second round, the Homeland Union – Lithuanian Christian Democrats (TS-LKD) took a categorical position regarding negotiations and entered consultations with the “Peasants” with clear advance conditions, which if not satisfied, would mean negotiations were off.

Related articles
Vilpišauskas. A week after elections. A week to a new coalition?
Kubilius on why the “Peasants” won the election

A number of Conservatives want to negotiate

That said it appears that Gabrielius Landsbergis who participated in the consultations, has a group of people in the party which hold different opinions and are considering opportunities to talk to the “Peasants”.

One of them – Žygimantas Pavilionis, who won in his single-mandate district of Naujamiestis. He is gathering the Christian Democrat wing of the party around him and is planning to deliberate the question of communication with the “Peasants” in the near future.

When speaking to Alfa.lt Pavilionis assured that he agrees with the party chairman’s position that the “Peasant” negotiations with both the Conservatives and the Social Democrats on forming a coalition are not justified. Nevertheless, the politician is convinced that the TS-LKD should demonstrate a willingness to negotiate with the Peasant Greens who won the election.

“I believe that it is always worth beginning negotiations, if certain conditions are fulfilled; as far as I understand the “Peasants” are very flexible. There are very clear conditions however, that I am equally in favour of, for example that you cannot have negotiations on two fronts. They have to happen with us, but in such a case there has to be a firm will to negotiate from our side, which I do not see,” said Pavilionis.

“Since this was not discussed even once in the presidium, something that should have been done on the day after the elections, it is very hard to gauge the opinions of my colleagues,” spoke the Conservative, when asked whether negotiations with the “Peasants” would be supported by other party members.

Pavilionis openly criticises the TS-LKD position during consultations on partnering to form a coalition with the “Peasants”.

“I have participated in negotiations for the past 25 years and find it overall odd that negotiations are done using publicity, with negotiation principles and interests being publicised even before discussing them with potential partners.

As you know, negotiations typically are marked by confidentiality and the results or lack of only become publicized after the negotiations conclude. This is why I do not believe that you can run negotiations through Facebook or the media. If you have at least minimal respect for your negotiation partner, then you do it behind closed doors,” explained the former diplomat.

After last week’s party leader meeting, S. Skvernelis assured that the TS-LKD still has chances of forming a coalition with the Peasant Greens who won a landslide victory in the elections.

“The situation is such that opportunity and space still remains for working together,” Skvernelis told journalists.

“In fact what has been said is rational, that speaking of tasks is essentially the intent to is in essence the wish to see a cabinet, programme based partnership or a coalition agreement. That, I believe, is sufficiently rational,” commented Skvernelis.

Landsbergis hinting about renegades in the party and minister posts

“Peasants” not stopping negotiations for the Conservatives

“We are only hearing rumours about potential renegades, but the rumours are concerning,” said...