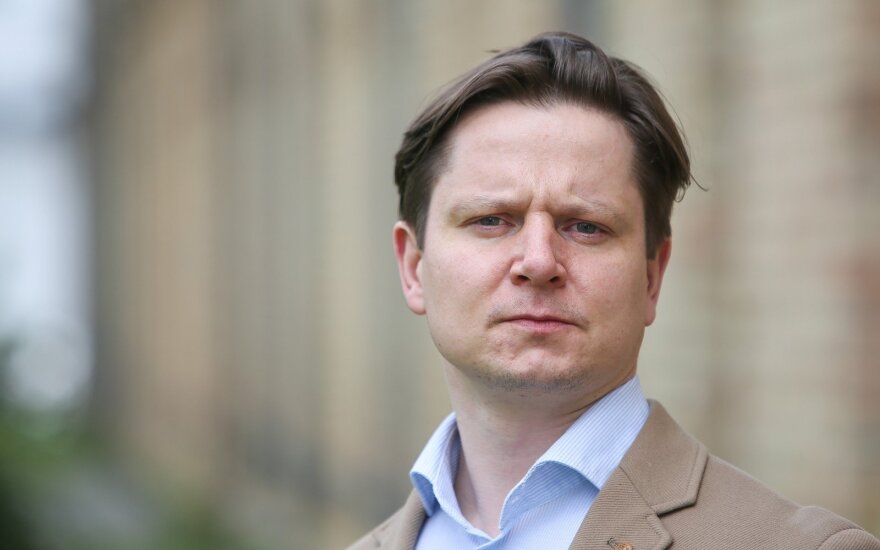 The Peasant and Greens Union Chairman Ramūnas Karbauskis appeared in the centre of media attention already weeks ahead of his party’s victory in the Seimas elections. However the attention of the past few weeks and the questions posed by media representatives do not appeal to him any longer TV3.lt reported.

Several weeks ago Ramūnas Karbauskis’ Seimas group deputy Greta Kildišienė entered the media spotlight as well. It then surfaced that the mother of the member of Seiams is leasing a car from Ramūnas Karbauskis’ Agrokoncernas. The vehicle was used by Greta Kildišienė herself. A week of questioning ended with the revelation that the member of Seimas has concealed a theft, following this revelation she relinquished her mandate as a member of Seimas.

After a Seimas group meeting Ramūnas Karbauskis claimed the group is at its most unified. Absolutely united. On the next day Bronislovas Matelis departed the group, revealing that after all things are not what the group prefect claims. Ramūnas Karbauskis continues to remain out of reach for the tv3.lt news portal – his phone remains switched off.

Communications expert Arijus Katauskas says that in the whole situation he can see that R. Karbauskis is simply confused. “Let us recall how in his time Ramūnas Karbauskis was almost the entire party and group’s press representative, not just leader. He commented on everything, everywhere how he saw it. And when he commented he made major mistakes which deepened the crisis. This is where we see confusion. Simple confusion. It is obvious that seeing such behaviour from the side politicians began to fairly clearly present their agreement or disagreement with the chairman’s position. Then it was a logical step to attempt and rein in the crisis. This was an attempt to halt what was going on and attempt to establish a certain order in interacting with the news media, who does it and how,” said A. Katauskas.

The communications expert believes that R. Karbauskis attempted to contain the crisis situation with a wall of silence. This silence was, however, not constant. “But Mr. Karbauskis is Mr. Karbauskis. And it appears that they will somewhat change their communications, but he will still talk. And this is what we saw these days when the current crisis is linked with the previous. This is a spillage of internal information outside and a loss of members,” the expert said.

Revealed dissent in the group himself?

As the key moment and critical point Arijus Katauskas identifies R. Karbauskis’ statement after the Wednesday group meeting. “Karbauskis left the group meeting and his first words were not of the car, but about how the group is united, it was already clear that something serious is going on there. Because no-one really asked about it. And when the person starts answering questions no-one asked, then logically we have to consider why he is answering them,” pointed out A. Katauskas.

The communications expert was also surprised by the constantly shifting opinion of the group leader. “It is obvious that perhaps we do not know how things are developing in the group. We know several positions, but what is going on in there is unclear. This is because every day there are statements that there will be no further comments, but the next day interviews are made one after another, all with peculiar statements. To me it appears that the communications will remain unclear because either the politicians are not listening to experts or sometimes even common sense,” he noted.

Fear of the media?

Having withdrawn from the Peasant Greens group on Thursday Bronislovas Matelis revealed that during the group meeting Ramūnas Karbauskis threatened party members with media attention. In a Thursday news conference the member of Seimas leaving the group claimed that the situation is not as unified as R. Karbauskis says. “Karbauskis imagines that the party is some sort of group of good hobbits, while the public and journalists are the kingdom of Mordor attacking and hunting them. The group prefect is inadequately reacting to the current situation. I simply want to leave and clearly speak of what is going on there. Karbauskis still does not understand that the whole scandal is a problem of Kildišienė and not the group,” the politician said.

“From yesterday’s meeting when R. Karbauskis apologised for the situation, the talk continued to revolve around how you are surrounded by the country of Mordor, the evil spirit which attacks only you, be prepared, dig trenches, soon they will attack, attack you, your children, your family. I am not kidding, that is what was being said. I believe that after an apology those words do not are not inappropriate compared to what the group prefect should be doing,” member of Seimas Bronislovas Matelis recalled the Wednesday group meeting.

Communications expert Arijus Katauskas claims that R. Karbauskis’ warnings to his party members is a struggle between the Seimas group and the news media. And it was provoked by the politicians themselves. “I think this is emotion. Because this is the Peasant Greens Union entering a sort of war with the news media. It was visible from the start of the crisis when the journalists were accused of bias and harassment. On the other hand we can see the clearly synchronised excellent work of the media. And such cases are rarely seen. The politicians are currently thinking that the news media is doing this due to some sort of conspiracy, forgetting that they were the ones to do everything to provoke the media to seek answers.

After posing questions the media noticed the politicians were being evasive. Any self-respecting journalist’s task is to try seeking an answer, what is being hidden. As such the war, the attempt to justify those mistakes, it leads nowhere,” the expert explained.

The scandal surrounding car lease and relationship with MP Greta Kildišienė has affected the...

MP Bronius Matelis has decided to leave the political group of the ruling Lithuanian Peasant and...