Artūras Dubonis | ldkistorija.lt
From the eighth century onwards, climate in Europe was becoming ever milder while the period from the 10th through the 13th century is often referred to as the “warm Middle Ages” or the “climatic optimum”. Summers were, on the average, one to two degrees Celsius warmer compared to the late 20th century, and precipitation was more abundant. The warm and humid climate enabled more intense development of agriculture and husbandry while also making use of new crops. By burning out sections of wood, people were rapidly expanding open areas for fields and grazing grasslands. Oat, wheat, barley, all suitable for drier climate, were the favourite corn, as well as the less-demanding rye. Archaeologists date the first traces of winter rye fields in the Samogitian Heights back at around the year 800. 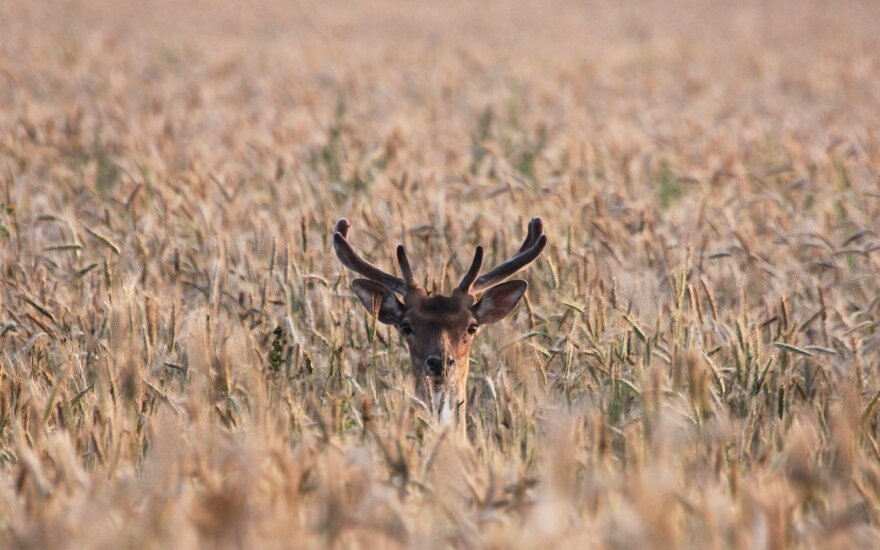 When did the climate worsen in Lithuania?

In the 13th century, Lithuania was a land suitable for living with apparently unaggressive climate. Bartholomew of England, a Franciscan monk, was laconic while outlining the signs of the end of the "warm Middle Ages" in Lithuania in the first half of the 13th century: optimal conditions for agriculture, abundant resources in forests, yet cold winters – because the first three decades of the century were quite chilly. Complex archaeological, geological and paleobotanical examination carried out in the Baltic land of Sėla, in the settlement of Judonys and around the Jara Lake in the north-eastern part of today's Lithuania, provided some information on climatic impact on people's lives of the period.

The interval from the second half of the 10th century to the middle of the 11th century is considered a time of economic flourishing in Judonys. Local people were expanding arable fields (the evidence being plentiful remains of burned wood) as well as areas of hayfields and grasslands for grazing. They would saw winter rye and kept their fields in an uninterrupted use while the total area of usable land was at its peak from the Mesolithic era. In the 12th century, Judonys gradually regressed as an economic centre although the human activity has not ceased.

The colder period which followed several centuries of mild climate, appeared to become one of the most evident changes of climate over the last two millennia. A drop of the average annual temperature, which began in the 14th century and continued into the second half of the 19th century, is referred to as "the little ice age". According to climatologists, temperatures first began decreasing in the 13th century in the North Atlantic region. Greenland, and to some extent Iceland, became only just habitable to humans. In the 14th century, "the little ice age" reached Europe. Winters turned longer and colder.

That was not, however, an entirely severe period climate-wise as colder spells would be followed by warmer times. Nevertheless, each new wave of chill would surpass the lowest levels of cold seen before. The difference in the average annual temperatures between the times of the historical "climate optimum" and "the little ice age" in Lithuania stands at two to three degrees Celsius. Historical sources both in Lithuania and neighbouring countries witness 16 extremely chilly winters, the number roughly equal to that in the 13th century. Most of them occurred between 1305 and 1311, as if repeating the chilly first three decades of the 13th century.

Later, seasonal weather contrasts started to emerge marking the beginning of "the little ice age" in the Grand Duchy of Lithuania. Weather would prove unstable, as several subsequent cold winters would be followed by a warm one. From 1324 onwards, winters gradually became milder with ten chilly ones and 21 warm ones to 1379 and thirteen mild ones from that year on. That's why the levels of precipitation and higher number of cold summers are the two reliable indicators that point to the gradual decrease in the average temperatures. There were five cold summers in Lithuania in the 14th century while the situation in Russia and Europe was even worse in this respect.

All is well that ends well

Throughout the Lithuanian lands, the overall level of precipitation was high every winter. The historical sources of the 14th century provide some information on a phenomenon rarely mentioned before, the spring flood. Some floods would turn potent enough to halt the Crusaders' raids in Lithuania. Of the seven documented floods, five occurred between 1375 and 1388. The flood of 1382 was particularly high and tardy, starting on May 25. Wigand of Marburg, a herald of the Grand Master of the German Order, wrote in his chronicle that the winter of that year had been chilly and snowy while the spring flood had hampered the Crusaders' raid in Lithuania as they had experienced difficulties when crossing even smallest brooks. In the 13th century, the weather rarely posed an obstacle to military raids. That, however, often was the case in the 14th century when warm and rainy winters had deranged a number of the Crusaders' raids against pagan Lithuanians and considerable wealth had been skittled away by the Western European noblemen for the preparation of these reisen although in some instances the guests would force the warrior-monks to march even in bad weather.

The rise in the number of cold winters and the level of precipitation, as well as strong spring floods, all contributed to the shortening of time spans favourable for agriculture which, in turn, made it ever more difficult for the inhabitants of the Lithuanian lands to keep to the traditional economic activities and everyday life. In his History, Jan Długosz gives a felicitous characteristic of the unfavourable climate and cool summers in Lithuania in the second half of the 15th century: "It is for two months only (...) that one can more or less feel summer, (...) people reap unripe crop and, by drying them by the fire in a wrong manner, they ripe them by artificially giving them a nice colour."

The old state of Lithuania located itself in the area seismically almost inactive, therefore earthquakes would scare people greatly. In 1230, an earthquake in Eastern Europe was felt to a larger extent in Kiev and, to a lesser extent, in Novgorod. Earthquakes repeated in 1303 (on the 8th of August), 1328 and 1335. The earthquake of 1328 has been particularly well depicted by the sources as the Order's brothers, who stayed in the Castle of Skirsnemunė (Christmemel) at the time, eyewitnessed the event. They inform that tall buildings began moving but did not fall down. The earthquake apparently was a powerful one, felt all around the Eastern Europe and registered, apart from other places, in the land of Novgorod. In 1335, the contemporaries experienced three ruptures of an earthquake in Prussia. Its epicentre was in Germany.

In the face of cooling weather, the years 1348 and 1379 were favourable for agriculture rendering good harvest, the fact that the contemporaries in Prussia and Livonia happily described: the harvest was stored up in June and July while the locals enjoyed fresh vegetables, beer and wine (vodka?) for the St. John's Day. This could serve an indirect hint to suggest that weather conditions in the 14th century were gradually deteriorating.

Drinking in the Grand Duchy of Lithuania

Alcohol, produced by fermenting liquids, has been known in many continents and cultures from as far...

The sacrifice of captives

Human sacrifice is attributable to the most forbidding customs of ancient tribes. Among Asian and...