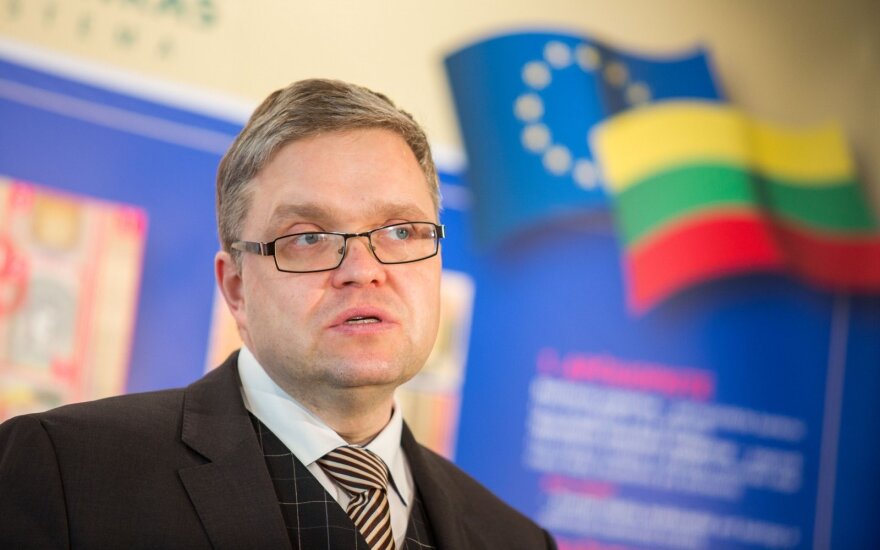 "The conducted analysis of the 2016 real estate marked by us revealed that while in the beginning of the year house prices increased by 3 pct. nearing the end of the year the number reached 9 pct. Although, we shouldn't be talking about a possible bubble bursting as of yet, but the temperature in the real estate market is surely rising" – stated Vitas Vasiliauskas.

Is there another real estate bubble growing in Lithuania, as a precursor to a real estate crisis? On the topic – spoke Vitas Vasiliauskas, the chairman of the board at the Bank of Lithuania during the talk show "Dėmesio centre", as well as Mindaugas Statulevičius the director of the Lithuanian Real Estate Association and Saulius Vagonis the head of the assessment and market research department at "Ober-Haus".

The growth of the real estate and credit rates in Lithuania is one of the fastest in Europe? Why, is this Mister Vasiliauskas?

V. Vasiliauskas: This is how the economic cycle works. We are in the growing part of the economic cycle. Thus, the economy is developing and lending is also increase, to which the real estate market responds. I would say that this trend is natural.

Do you see the rapidly growing real estate credit and prices as a problem?

V. Vasiliauskas: We would say that challenges will arise in the medium-term, in other words within a few years. We have talked about financial stability and the probable future scenarios, thus one of the risk facts which will not necessarily come into realization is precisely the domestic real estate market.

Is the Bank of Lithuania going to tighten the conditions for credit in Lithuania? Since they are already tightened: for example in order to get a housing loan there is a need to have at least 15 pct. of the total value of the house, and the longest periods given for credit is – thirty years.

V. Vasiliauskas: Currently, it's hard to tell, we will count our chickens in the fall. We have conducted analysis of the 2016 real estate marked by us revealed that while in the beginning of the year house prices increased by 3 pct. nearing the end of the year the number reached 9 pct.

The analysis showed that the activity decreased during April and May. Thus, while it's too early to make conclusions, it is obvious that the temperature is rising and we are trying to inform the public in advance of this.

At the moment it would appear that there are many real estate development projects in both Vilnius, Kaunas and Neringa. H ow many people that are buying real estate objects, thus investing their money this way Mister Statulevičius?

M. Statulevičius: It should be noted that the once investing into real estate are doing so in the major cities – Vilnius, Kaunas as well as the coastal region. These ae the few growing cities in Lithuania, which is why the value of the said real estate is higher, as is the return investment. Although, we do not have precise data, there are examples where half of the flats in the houses are bought in regards to renting possibilities.

V. Vasiliauskas: To date, about 70 pct. of all real estate transactions are financed by mortgage loans, not regarding the number of transactions.

Are there a lot of cases, in which a third and fourth home are acquired through the use of bank loans, but are regarded as investments? Is a person simply investing money into cheap bank credits?

V. Vasiliauskas: Yes, there are quite a few of these cases. What percentage the purchase of a secondary house makes ups in regards to the total housing loan, I cannot say. But investments such as these in regards to receive higher returns through rent, are quite popular.

Mister Vagonis, according to the data provided by the Bank of Lithuania last year the real estate market finished with a 9 pct. price increase. How do you interpret this?

S. Vaognis: If we are looking at statistics, we are counting the five major cities in Lithuania: Vilnius, Kaunas, Klaipėda, Šiauliai and Panevėžis. According to, our data last year on average prices increased by about 5 pct., in Vilnius of course it was this was a little higher – about 7 pct.

The figures to that show, that from the month of January till the May apartments in price went up 1.5 pct. while in other cities they went up – 1 pct. Last year, this pace was faster. Thus, the increase in price this year is not magnanimous. For example in 2007, prices usually went up by several percent's a month.

Are you saying that there is no risk currently and the market is not overheating?

S. Vagonis: I think, that the Bank of Lithuania is engaging in very good prevention of the problem. A bubble needs to be stopped not when it bursts and simply say that the bubble burst – saves ourselves, but you need to avoid its formulation in the first place. The Bank perceives and active market. Last year it was recorded that there were 11 thousand apartments sold in Vilnius, a record breaking number.

While this even more than the record that had been established before 2007. The large volume of transactions are not balanced by the increasing prices. Which is good, and shows that the market is active.

Although, the demand is quite large, so is the supply of the construction companies that are building of new apartments which slightly constrain the rises in price.

Because of this I think that we do not need to worry so much. It is very good, when the bank warns of the risks because this restricts the speculative desires of the people, as they were in 2007 when the idea was to buy the apartment on the cheap and then sell it for profit later.

Thus, we see the difference between the current buyers from the ones we had ten years ago which do not seek profit on their purchase they can accumulate by selling it but are just calculating how much profit they can obtain from renting them.

So the practice buy and wait when it will go up in price is gone mister Stalutevičius?

M. Statulevičius: Yes. For today, an apartment is seen as a mean of earning money. There is a possibility of this being lower in Vilnius, while in Kaunas and Klaipėda there is a possibility to earn about 5-6 pct. from this. Especially, through the utilization of short-term leases.

V. Vasiliauskas: I think, that is very important that there was a separation of understanding between housing and commercial real estate. Sine we are currently highlighting the housing aspect of this.

In regards, to commercial real estate, it is not a secret that Vilnius in terms of returns on investment is one of the most attractive cities in Eastern and Central Europe. It is predicted that the supply throughout 2017 will increase by about 17 pct. Which means that it will excess the demand.

Thus, a bubble in this area should not be expected.

If we look at history, we must recognize that in 2016 the situation was at the direst, as we have already mentioned the real estate prices increased by about 5-6 pct., while the wages increased by a much more modest estimate.

However, until then, looking at the post-crisis situation he wages increased at a much faster rate that the real estate prices. The affordability of housing in Lithuania is at its historical best, today.

Remembering the 2008 bubble after warnings of a heating housing market

While banks in Lithuania are resilient enough to possible shocks in the financial markets, a possible...