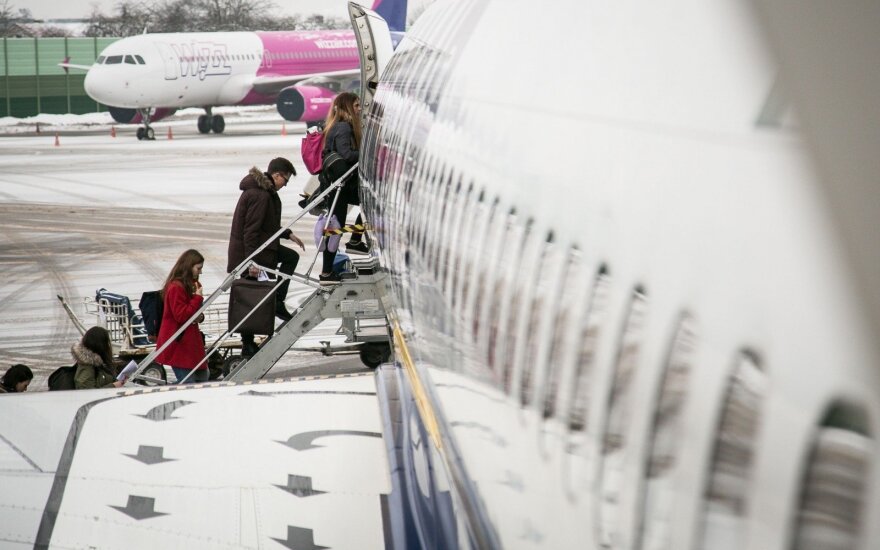 For the first time since 2004, this May there were more arrivals in Lithuania than departures, but Lithuanian emigration remains larger than re-emigration, lrt.lt writes. Sociologist Vlada Stankūnienė says that there is nothing to celebrate yet because the statistics are boosted by an influx of foreigners, which is not sustainable and neither is the return of Lithuanians. According to economist Žygimantas Mauricas, truly good trends would be revealed by a positive Lithuanian migration balance. "Another indicator that the situation is improving would be increased frequency in naturalisation processes, where immigrants and their children become Lithuanian citizens," he says.

While at the start of the year it was announced that last December, there were more arrivals than departures from Lithuania for the first time since 2004, later data corrections led to May becoming such a month. In May, 3084 individuals departed Lithuania and 3627 immigrated, according to Statistics Department data.

"The month of May was the first time since 2004 when there has been a positive balance: more arrivals in Lithuania than departures. It is hard to say whether this will be a sustained trend, but it is at least reason for optimism," first deputy government chancellor Deividas Matulionis told journalists last week.

However, based on advance data, 2261 (62.3% of all arrivals) Lithuanian citizens returned to Lithuania, while 2722 (88.3%) Lithuanians emigrated. Hence, the number of departing Lithuanians is still almost half a thousand higher.

"We should not draw deep conclusions from month by month data. It is important to note that a positive influence on the data was made by those arriving from the East, from Ukraine. I have always said that first we shouldn't push our own out, not suppress wages for our own people. There are currently no shifts in this, thus those who can leave are doing so.

The arrival of foreigners is not sustainable, however neither is the return of Lithuanians. A large part of those returning, failing to establish themselves here, turn around and depart once again. Perhaps the situation is not deteriorating and is stabilising, but there is nothing to celebrate yet. In the end, the number of those, who can still depart, is declining, thus we should not make conclusions based on absolute numbers," V. Stankūnienė notes.

Meanwhile Luminor bank chief economist Ž. Mauricas states that the migration scales almost inevitably lean toward the positive side because life in Lithuania is improving.

"We have said so much bad to ourselves. That Lithuania will vanish, that the last to depart shouldn't forget to turn off the lights in the airport. However, I have long said that the probability for such things is low and a breakthrough will happen sooner or later.

Lithuania and Latvia are practically the only countries remaining in the region, where there is negative net migration. With growing income levels, the balance turning positive is a natural process. At the start of the year, I even made a bet that this will be the best year yet in terms of migration. I did not state that it will be positive in terms of the migration balance, but I believe the likelihood is increasing," the economist says.

That said, as V. Stankūnienė points out, the positive migration balance pie might have a pinch of salt thrown on it by youths departing to study abroad.

"Let us wait for autumn. Though it may look positive, our youth leave to study abroad. Then we will see, what will happen in July-September, how many will leave from the youngest group of emigrants," she says.

According to Ž. Mauricas, whether immigration figures are sustainable or not should not be based on nationality, whether Lithuanians are returning or foreigners arriving, but instead on the intentions of those arriving to build their lives or at least a major stage of it in Lithuania. That said, so far fewer foreigners than returning Lithuanians intend to stay long term.

"If Lithuanians return here with the intent to raise children, start a business or already have a job, it is certainly positive because it is likely that such people will not emigrate once more any time soon. We should pursue the same for those arriving from third countries. However, so far it is more the immigration of cheap labour and this is not necessarily a positive phenomenon.

However, there are foreigners who see their lives in Lithuania and not just those from third countries, but also from EU member states. I believe that Lithuania has crossed into a higher level, the quality of life here is sufficiently high," Ž. Mauricas assures.

He believes that a good indicator for the demographic situation in the country improving would be the difference between arriving and departing Lithuanians.

"Another indicator of the situation improving would be the increased frequency of naturalisation processes where immigrants and their children become Lithuanian citizens. And well, the absolute best would be if we went to Poland for shopping, but the Poles came to us to work. Then we would be the Eastern European Ireland," the economist says.

Meanwhile, V. Stankūnienė emphasises that a long-term positive balance of returning Lithuanians to departing would be an indicator of positive change, but what is even more important is for them to not depart once again.

"And for this we need serious economic shifts, so that those individuals would have the opportunity to establish themselves here. What is also very important is to reduce differences between income sizes here and in emigration destination countries. This is a very serious factor, decisive in the choice to depart and no longer return," V. Stankūnienė says.

As Britain is set to leave the European Union , Ireland is seeking closer ties with the Baltic and...

Lithuania's membership in the Organization for Economic Co-operation and Development (OECD) will...