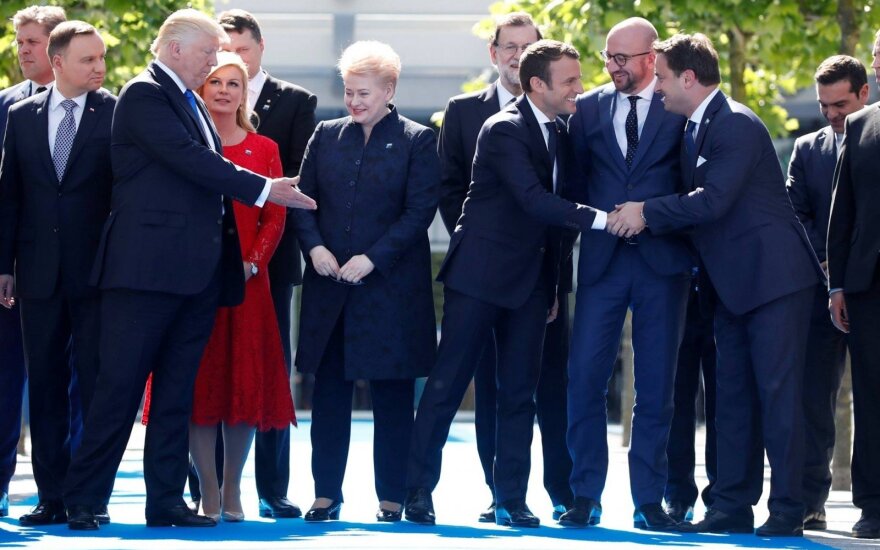 The threat of Russia is not only a phrase repeated by Lithuania constantly, but also a statement in NATO official documents, marked as number one. And if there is a problem, there should be solutions to it being made. This is what Lithuania may reach in the run up to a NATO summit meeting in Brussels.

Having spoken of threats to their national security for years, the Baltic States should receive recognition: the July 11-12 summit may lead to the Alliance committing to fix the gaps, which the Lithuanians have insistently been pointing out.

That said, it is no secret that prior to the event in Brussels, there is less talk about its content and more about US President Donald Trump, his demands to Alliance member states to increase defence funding and his later bilateral meeting with Russian leader Vladimir Putin.

For example, on Monday D. Trump described Washington "spending more on NATO" than other Alliance members as unacceptable and once more urged allies to raise their military funding.

"Yes, these countries (NATO members) began raising their contributions since I became president, but they must do it far more," D. Trump wrote on Twitter. "The USA spend much more on NATO than other countries. This is unfair and unacceptable," the American head of state declared.

"Europe receives more benefit from NATO than the USA. Based on some calculations, the US covers 90% of NATO's expenses," he added. D. Trump also specified that most NATO members "are nowhere closer" to spending 2% of their GDP on military expenditure, which is the Alliance's expected minimum.

Such statements from D. Trump are no surprise and are mostly intended for Germany and other major Alliance members in Europe, who are in no rush to increase their defence expenditures. Lithuania and the other Baltics should not worry about this because all three dedicate more than 2% of their GDP to defence. However, there is also another reason why Lithuanians seem more optimistic about the US position and NATO's future than Western European partners, who already paint grim future visions of the Alliance breaking apart.

In June, having sent the leaders of Germany, Belgium, Norway and Canada threatening letters, D. Trump expressed disappointment that certain allies are not raising defence expenditures as promised. Having decried the Europeans over not fulfilling their commitments, D. Trump has seemingly created such tensions that already public talks have surfaced whether the meeting may fail, as occurred last month in Canada, where the US president did not sign a declaration featuring the 7 most powerful states in the world.

Declarations, public and classified, are also the most important documents of NATO summits. Not only Alliance member states, their government representatives, but also NATO military planners make use of them as guidelines. According to the Lithuanian Presidential Palace, the planned declaration very clearly specifies Lithuania's aims.

Of course, the theoretical possibility that D. Trump will act demonstratively fickle and will refuse to sign the declaration remains. The worst case scenario would be if refusing to sign a declaration with allies, D. Trump would negotiate with V. Putin on US concessions to Russia, for example halting military exercises, reducing sanctions, withdrawing troops from Ukraine and all of Europe, in return to Russian proposals over Syria and elsewhere.

However, for now at least, such a scenario is rather unlikely. This is not only because the Kremlin has little valuable to offer the USA, which would counterbalance the benefit of traditional American allies or the opposite – the harm of American concessions.

Furthermore, in diplomatic and military circles there have been no signs of American withdrawal. Quite the contrary, specifically a Trump administration US troop reinforcement plan and constant funding increases to the European deterrence initiative (reaching 4.8 billion dollars this year), creation of a new NATO headquarters in the United States and other actions show that panic over a supposed betrayal by D. Trump is currently based on only his rhetoric, not actions.

Furthermore, in preparation for the NATO summit, efforts were made to avoid a negative scenario because this time the Alliance member states carefully reviewed the declaration text well ahead of time, thus its content should not cause any major disputes on Wednesday and Thursday.

While the planned public declaration version does not feature specific wording on two questions of particular import to Lithuania – air defence system deployment in the Baltic Sea region states and new land force headquarters establishment on the Eastern Alliance border, a part of the planned actions could be read between the lines or in the classified portion.

On the other hand, it is important to Lithuania that the NATO declaration unanimously recognises the threats posed by Russia – both conventional and non-conventional.

Having ripped Crimea away from Ukraine in 2014 and created a war in Donbas, in recent years Russia has performed aggressive foreign policy in Syria and organised the Zapad exercise in its neighbour Belarus, imitating an attack against NATO. Furthermore, in the most important Alliance member state, the US, the Kremlin has been accused of spying, efforts to tamper with presidential elections and in the United Kingdom – use of chemical weapons.

As such, the pursuits of some European countries to seek renewed cooperation with Moscow will likely be left unaccomplished – only political dialogue will be maintained with Russia. Furthermore, according to the Presidential Palace, in response to the Russian and other threats, the Alliance should negotiate a new preparatory initiative.

Other than the current NATO rapid response force and Alliance international battalions deployed in the Baltic States and Poland, by 2020 NATO will commit to the creation of another high preparedness force, which could act in the face of crisis. 30 land force battalions, 30 air squadrons and 30 warships would have to be ready for action within 30 days.

Decisions planned for the summit should contribute to a more rapid deployment of such NATO forces: founding of headquarters in the USA and Germany, simplifying transport procedures. In the latter area, Lithuania has already been demonstrating an example and can grant permits for transit within 24 hours of request, while elsewhere in the EU this process may take up to 5 days.

By committing to closer cooperation, NATO and the EU would have to not only simplify and increase the speed of force transit procedures, but also adapt civilian infrastructure for military needs. Simply said, NATO members must invest more into roads, bridges, airports and other infrastructure objects, which could be used by military hardware without obstructions. Lithuania alone intends to spend over 430 million euro to this end – most of this sum will be earmarked on the Via Baltica roadway infrastructural projects.

Furthermore, the meeting will seek to grant more authority to the chief NATO force leader in Europe – SACEUR and before then, there are plans to organise more decision-making exercises.

Finally, according to the Presidential Palace, Lithuania should be left content with the raising of the air defence question. Apparently just the mention of this expensive capacity as an area where NATO has flaws shows that such recognition may lead to significant decisions within the next few years. In other terms, if the problem is recognised and solutions are analysed, SACEUR could present an official proposal on how, where and at whose expense air defence capacities in the Baltic States will improve.

Arcus Novus , the developer of a data center project near Vilnius, and its majority shareholder,...

President Dalia Grybauskaitė said on Tuesday that Lithuania may contribute to easing tensions...