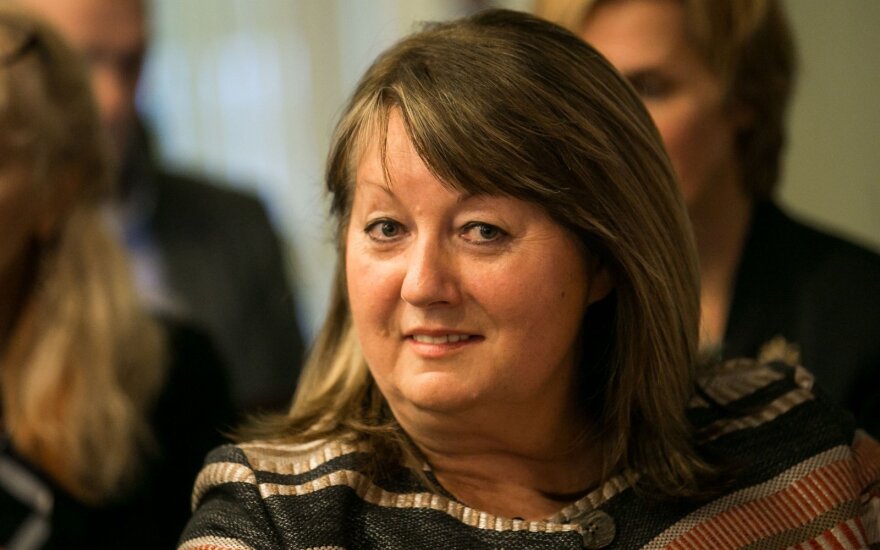 The Social Democrat party’s ratings show that the people do not trust in the Social Democrat party (LSDP) and are not prepared to vote for it. Furthermore, the party’s ratings which do not even reach 8% according to some data, could decline even further, thus the SocDems need significant changes in both the coalition government and in the party’s leading figures. This is what candidates to the post of Social Democrat party chairman Gintautas Paluckas and Mindaugas Sinkevičius told LRT.lt.
MEP Vilija Blinkevičiūtė says she is surprised her colleague Zigmantas Balčytis will not compete for the post of chairman, as he is a strong candidate. As for Conservative leader Gabrielius Landsbergis’ statements that G. Paluckas is the most suited to lead the SocDems, the politician answers that Conservative praise should be received with cautions. “That is what it looks like to G. Landsbergis, but it isn’t the Conservative party’s leader we are electing,” Blinkevičiūtė notes.

Related articles
SocDems– coalition with “Peasants” not satisfactory, agreement will have to be reviewed
Survey: new ratings are unfavourable for not only Karbauskis

Invisible in the coalition

According to survey data gathered by the public opinion and market research company Spinter Tyrimai, commissioned by Delfi in February, the Social Democrats could expect support from 7.7% of the electorate, a decrease of 2.5% from January.

Vilnius vice Mayor G. Paluckas states that this is a clear signal that the LSDP is drifting, lacking clear leadership, clear vision and clear political agenda. He notes this needs to be resolved by May because as things are party members are left demoralised and demotivated. Paluckas explains that the LSDP is experiencing a crisis in representation because the people no longer believe the party represents them. The candidate to the post of LSDP chairman points out that this situation has been long in the making and the lost emotional connection and trust are the core matter the party needs to concern itself with, rather than attempting to excuse itself or perform some sort of defensive manoeuvres.

Meanwhile another candidate to the post, Minister of Economy Mindaugas Sinkevičius believes that the current situation appeared due to a constant string of scandals plaguing the party, predicting that events of recent weeks could make matters even worse. According to Sinkevičius the party does too little to stand out positively, with the SocDems lacking clear positions in the coalition with the Farmer Greens, lacking legislative proposals, lacking active political communication. “Perhaps we are awaiting a new party leader, that’s all. Everyone is waiting for something and are doing nothing,” M. Sinkevičius summarised.

With LRT.lt reminding Minister Sinkevičius that he himself is a representative of the ministerial cabinet and leads the Ministry of Economy, the politician admitted that he too needs to be more active, pointing out an article in the Lietuvos Rytas newspaper where he is among the three least visible ministers. On the other hand he points out that he does not wish to meddle or comment on matters unrelated to his ministry or economics.

Meanwhile Homeland Union – Lithuanian Christian Democrats leader Gabrielius Landsbergis believes that the Social Democrats would be best off with electing G. Paluckas to lead the party. He stresses that the Social Democrat party is in a deep crisis currently, one that has been decades in the making. The Conservative leader points out that this election will decide the course of the Lithuanian left, which is why his party is following the proceedings with curiosity and concern.
G. Paluckas himself is cautious of such endorsement from the Conservatives, musing that perhaps the endorsement is actually because the Conservatives do not want him elected because his plans are the most radical, focusing on ideological renewal, reconstructing party identity and renewing the party’s top echelon and regional representation.

The politician expressed some surprise at the positive reception his ideas received from fellow party members he met during visits to party branches, with some calling for even more radical change. He stresses that absolutely everything needs to change about the party because things as they are now are unsustainable.

M. Sinkevičius responded to G. Landsbergis’ expressed preferences by pointing out that while the Conservatives may have decided what the best chairman for the Social Democrats will be, we should wait and see if the Social Democrats agree with the Conservatives’ opinion. The politician expressed strong confidence in his chances to win and that he is already thinking about future tasks, building a team to achieve them and long term goals.

V. Blinkevičiūtė: it is not the Conservative leader we are electing

MEP V. Blinkevičiūtė, who chose to not run for the office of LSDP chairperson, bids for caution regarding Conservative endorsements.

“That is what it looks like to G. Landsbergis, but it isn’t the Conservative party’s leader we are electing. I believe the people will elect the most suitable candidate. I believe it will be a young and energetic person. I will always help and stand by them,” Blinkevičiūtė promised. She was surprised to find out that her colleague in the European Parliament Zigmantas Balčytis opted to not run for the office either, as according to her he is a strong candidate.

Z. Balčytis explains that he received the opportunity to work in an international organisation and wishes to attempt such a new challenge. He intends to withdraw from the European Parliament in April.

V. Blinkevičiūtė expresses belief that while the party has reached a difficult position due to various mistakes made, it is only a temporary matter because just like people, parties have their good and bad times. She also notes that people tend to support political powers they have big expectations from or new ones that have yet to be in government. The MEP also notes that the Conservative party was in a significant slump following its term in power and that it is important to focus on work rather than panicking.

Andrius Palionis, G. Paluckas, M. Sinkevičius, A. Skardžius and M. Varaška are the remaining candidates in the race to become SocDem party chairman. LSDP members will be able to directly vote for the candidates on April 6-8, with results to be released on April 10. The second round of voting, where the two most popular first round candidates face off, will be held on April 28-29.

The new LSDP chairman will be selected by May 2nd.

Lithuania's MEP Zigmantas Balčytis has decided to give up his mandate to pursue an international...